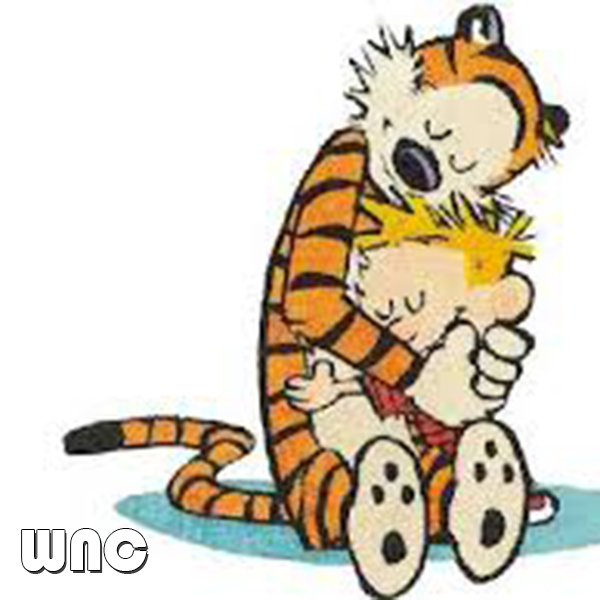 News
My friend Joi likes to say that a person needs six hugs a day to maintain their sanity. And there’s enough research behind that thought to warrant consideration. Having your personhood affirmed by tactile reinforcement can go a long way in our increasingly disconnected world. I was reminded of this today as I was walking home from the library and spotted a woman wearing a Superman shirt like mine. Hers was a rebirth era, and mine is classic, but Superman is Superman. So we laughed, claimed a bond only true comic book fans can claim, and then, catching me completely by surprise, she hugged me. We held there for a moment, wished each other well, and went our separate ways. You know what? The world needs more random hugs. And if you can’t do that, hug someone anyway. You’ll thank me when you do.

Okay, that’s about as treacly as I can get, but it has the advantage of being true and a great conversation starter. Above, you may remember, I said there was research behind the idea of hugging having positive benefits. And there is. The primary research was conducted under the directorship of Sheldon Cohen, PhD through a website hosted by Carnegie Mellon University. There was a ton of brain power dedicated to hugging. You can read the entire study, and its supporting research, just by clicking THIS LINK.

What you are about to read is an edited introduction to the paper they published. Since it’s real science, and not a late night infomercial, it’s a little dry in tone. But, as you peruse it, I think you’ll agree it’s full of warm fuzzies.

Receiving a hug is associated with the attenuation of negative mood that occurs on days with interpersonal conflict
Authors: Michael L. M. Murphy, Denise Janicki-Deverts,Sheldon Cohen

Non-sexual interpersonal touch is emerging as an important topic in the study of adult social relationships (for reviews, see [1–3]). Interpersonal touch can be defined as touch behaviors (e.g., hugging and holding hands) that are used to communicate affection or are generally thought to indicate affection [3]. Enthusiasm for this topic is bolstered by multiple lines of converging evidence suggesting that individuals who engage more frequently in interpersonal touch enjoy better physical, psychological, and relational health (e.g., [4–8]). Mechanistically, theorists have proposed that one of the key pathways through which interpersonal touch benefits well-being is by helping buffer against the deleterious consequences of psychological stress [3].

The theory that interpersonal touch improves well-being by acting as a general stress buffer has garnered a fair amount of empirical support. When exposed to a variety of different experimental laboratory stress tasks, individuals assigned to various interpersonal touch manipulations with romantic partners report less distress [9] and show reduced cardiovascular reactivity [10], cortisol secretion [11], and activation of brain regions associated with emotional and behavioral threat [12] compared to those who did not engage in interpersonal touch with their partners. Moreover, while much less studied, the stress-buffering effects of interpersonal touch do not necessarily appear to be limited to touch provided by a romantic partner. For example, in the previously mentioned study examining activation of brain regions associated with threat [12], individuals assigned to a touch condition with a stranger rather than their partner also showed less threat-related neural activation during exposure to a laboratory stressor.

While much of the research to date on touch as a stress buffer has considered stress broadly, there is reason to believe that touch might be a particularly effective buffer of interpersonal conflict more specifically. This possibility holds important potential implications for health and well-being because conflicts with others are associated with a large range of deleterious outcomes, including psychological distress [13], dysregulation of important physiological systems [14], and increased risk for psychiatric illnesses [15], suicide [16], and physical morbidities [17, 18]. Conceptually, touch may buffer against these consequences by promoting a number of positive interpersonal processes thought to communicate care and inclusion and be protective in the face of conflict [3]. In particular, interpersonal touch is associated with increased attachment security, greater perceived partner support, enhanced intimacy, higher relationship satisfaction, and easier conflict resolution [8, 9, 19, 20]

Jamie DuCharme, over at Time Magazine, has a nice layman’s view of it all.

“A very simple, straightforward behavior — hugging — might be an effective way of supporting both men and women who are experiencing conflict in their relationships,” explains co-author Michael Murphy, a post-doctoral researcher in Carnegie Mellon University’s Laboratory for the Study of Stress, Immunity and Disease.

For the study, Murphy and his colleagues interviewed 404 adults by phone every night for two weeks. Each person was asked about their mood, whether they had experienced conflict and if they had received a hug that day, among other questions. Each person also went through a physical exam and filled out a questionnaire about their health and social network at the beginning of the study.

Hugs, the researchers found, were associated with an uptick in positive mood markers and a reduction in negative ones; the opposite was true of relationship conflict. And on days when both occurred, people tended to report fewer negative feelings and more positive ones than on days when they experienced conflict but no hugs.

That trend was true regardless of gender, age, race, marital status, overall number of social interactions and average mood. It even carried over into the next day, although the drop in negative feelings was more pronounced on the second day than the increase in positive ones.

I know there’s a part of you saying “DUH! Of course being shown affection makes you feel better.” But that’s only part of it.

When I met my girlfriend I was not a hugger. And there are many who would argue that I was also a miserable asshole. Those aren’t entirely unrelated. Oddly, my last real job before I met my girlfriend involved running a help desk. And I was good at it. Long story short I set a performance record the day I was let go. My job was outsourced. That’s a story for a different day. Yet, by being away from people, I just talked to them via phone or email, I didn’t have to deal with them so I was fine. However, put me in a room with humans and I became acerbic. On my nicer days.

Then I met Kim. She hugs. Her family hugs. The people in her church, now our church, hug. Kids I don’t know hug. Two young ladies I helped with their English homework just hugged me as they let me know they’re in college now and doing well. I’m just tripping over hugs. If you read the story at the beginning you’ll know I mean that almost literally since the surprise hug tossed me off balance.

So, now, while I can still bristle in some situations, I find I’m more open to people, more patient, and capable of compassion I kept largely hidden. Like I said; “The world needs more random hugs. And if you can’t do that, hug someone anyway. You’ll thank me when you do.”

Until then, in the spirit of global detente, here’s some hugs from Russia with love.