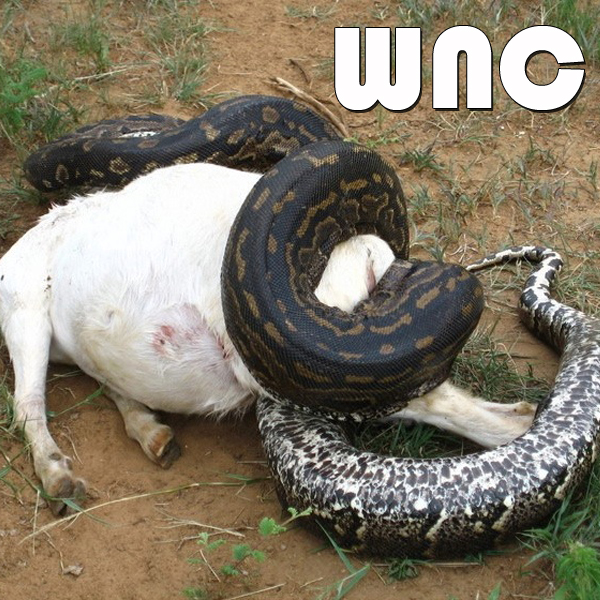 Back on January 10, 2013, I wrote a whimsical missive about how Floridians may be the stupidest, and most dangerous, morons on Earth. Not much has changed since then. Back then they authorized regular citizens to wander the Everglades and hunt pythons with handguns. For those who don’t party with giant constrictors, pythons can get to twenty feet long, a couple hundred pounds, and can kill and eat a four or five year old child without effort. Hunting them with handguns is akin to hunting rogue elephants with a slingshot. It can be done, but your aim better be amazing since you won’t get a second shot. Long time fan of the Friday edition of The Big Wake Up Call, the weekly radio companion to this blog, Roger (last name withheld by request) over at Smithsonian Magazine, sent me THIS LINK to update me on how well things have gone since then.

Not well would be the answer you’ll find.

The raccoons and marsh rabbits and opossums and other small, warmblooded animals are gone, or almost gone, because Burmese pythons seem to have eaten them. The marsh’s weird outdoor quiet is the deep, endlessly patient, laser-focused quiet of these invasive predators. About two feet long when hatched, Burmese pythons can grow to 20 feet and 200 pounds; they are among the largest snakes in the world. The pythons are mostly ambush hunters, and constrictors. They kill smaller animals by biting them on or near the head and suffocating them as they are swallowed. Larger animals are seized wherever is convenient, and crushed and strangled in the coils before and during swallowing. Large constrictor snakes have not existed in North America for millions of years. Native wildlife species had never seem them before, and may not recognize them as predators.

In Miami, a center of the exotic pet trade, dealers used to import them from Southeast Asia by the tens of thousands. It is now illegal to import or purchase Burmese pythons in Florida. Probably, at some point, python owners who no longer wanted to care for them let them go in the Everglades.

By the mid-1990s, the pythons had established a breeding population. For 25 years they have been eating any animals they can get their mouths around. Given the extremely stretchy cartilage joint connecting their jaws to their heads and their ability to extend their windpipe, snorkel-like, outside their mouths, so they can breathe while their mouths are entirely occupied with swallowing—that’s a lot of animals. A 2013 study found that, of a group of marsh rabbits fitted with radio transmitters and released into python territory, 77 percent of those that died within a year had been eaten by pythons. Scientists say that the snakes are responsible for a recent 90 to 99 percent drop in the small mammal population in the national park.

So, here we see the results of mixing toxic stupidity with hubris and removing common sense. On a side note, due to many factors, the majority human oriented, the Everglades have lost half their acreage since 1919. So, to bring you up to speed; there is a greatly reduced area for creatures to live in, a non-native predator wreaking havoc, and a series of governmental agencies that are relying on … I don’t know, hopes and prayers I guess, to handle one of the most serious infestations of wildlife this country has ever seen.

Honest to God this make the Asian carp seem like a lake lover’s pal.

Okay, as promised, here’s the original post. And it starts with the most Florida death ever, so I know you’ll be entertained.

People do stupid things. It’s a given. It is, in many cases, why this blog exists. I’m sure you all remember the guy who died from a cockroach eating overdose when he was trying to win a live python. Well, his death is related to our story here today. And, yes, this all occurs in Florida. You see, the Florida Fish and Wildlife Conservation Commission has come up with a great idea. In one fell swoop they will be able to increase the state’s IQ and reduce its population total. The twisted genius behind it is gloriously simple. They are taking the mentality behind “Hey ya’ll, watch this” and making it a contest. And, just to make sure they get the desired results, they are encouraging the use of weapons by untrained individuals. Did I say “encouraging?” Hell, they’ve got prizes.

And since there are pesky laws that require people have some semblance of training before they embark on a guaranteed suicide mission, they are providing a picture book. One picture is of the thing they are supposed to find. The other pictures are of things they are supposed to leave alone.

What is this great idea that my friend Michelle told me about? They are sending average Floridians into swamps full of poisonous and deadly snakes to hunt pythons.

You remember pythons don’t you? They can kill people pretty easily even without poison.

A python hunting competition starting on Saturday is drawing hundreds of amateurs armed with clubs, machetes and guns to the Florida Everglades, where captured Burmese pythons have exceeded the length of minivans and weighed as much as grown men.

Python Challenge 2013, a month-long event sponsored by the Florida Fish and Wildlife Conservation Commission, is open to hunters and non-hunters alike.

But the idea of luring weapon-wielding amateurs into the harsh environment of the Everglades has raised some alarms.

“I just thought it was as exciting as could be. It’s a once- in-a-lifetime opportunity,” said contestant Ron Polster, a retired salesman from Ohio whose closest encounter with the swamp has been from the highway heading south for the winter.

Participants pay a $25 entry fee and take an online training course, which consists mostly of looking at photographs of both the targeted pythons and protected native snakes to learn the difference.

The state wildlife agency is offering prizes of $1,500 for the most pythons captured and $1,000 for the longest python.

A Burmese python found in Florida last year set records as the largest ever captured in the state at 17-feet, 7-inches. The snake weighed nearly 165 pounds (75 kg).

FWC spokeswoman Carli Segelson said the number of registered contestants reached about 500 this week and was growing, with people coming from 32 states.

The stated goal of the competition is to raise awareness of the threat Burmese pythons pose to the Everglades ecosystem. The snakes are native to Southeast Asia and have no known predators in Florida.

The contest also serves as a pilot program to determine whether regular hunting competitions can cull the growing population of the invasive species, said Frank Mazzotti, a wildlife expert from the University of Florida who helped create the competition.

Python Challenge rules require contestants to kill specimens on the spot in a humane fashion, recommending shooting the snakes precisely through the brain.

“I was hoping there would be a lot of machetes and not a lot of guns,” said Polster, the retired salesman. He said he worries “these idiots will be firing all over the place.”

Shawn Heflick, star of the National Geographic “Wild” television show “Python Hunters,” told Reuters that despite the formidable size of the snakes, he expects the swamp itself, with its alligators, crocodiles and venomous snakes, to pose a greater threat to the contestants.

Segelson said the wildlife agency will provide training on the use of GPS devices and on identifying venomous snakes at the kick-off event. In the meantime, she said, contestants should be familiarizing themselves with the Everglades environment, just as they should before entering any other strange territory.

Heflick said most of the contestants likely were drawn to the Python Challenge by the romantic mystique of bagging a giant predator. He expects few will last long in the hunt.

This is great. Not only will they thin the herd down there they are getting the participants to pay them $25.00 a pop for the privilege. Seriously, I have a new found respect for the Florida Fish and Wildlife Conservation Commission. Any group of people that Machiavellian deserve to be bought beers.

And, as Mr. Heflick noted, these are people who will be surrounded by gators, crocs and water moccasins.

People who, as evidenced by the quotes, once drove past a wildlife farm on their way to a burger joint.

I wonder what the over/under is on the death toll in Vegas?

By comparison, also in 2013, I wrote about how the government of Guam, in conjunction with the U.S. Air Force, bombed their jungles with poison mice, but safe for humans. to kill an infestation of brown tree snakes. That bizarre idea actually worked and the infestation is under control.

Okay, back to stupid.

If you have a chance, scroll back to the top and read all of Ian’s article. It’s fucking amazing. It’s like a parfait made of stupid. One layer on top of another with no end in sight.

In the meantime, until our impending reptilian overlords learn to handle the cold, I’ll stay in Chicago.