You are here: Home / News / This Could Grow On You

Last week I wrote about how human limb regeneration research had hit a roadblock and wasn’t advancing at its projected pace. This was, and is, true. But, as several readers who are smarter than me, HI EVERYONE WHO READS THIS BLOG, pointed out, some stunning advances had still taken place. For those of you who haven’t followed my various articles over the last few years, I’ll just toss in a brief synopsis. Several invertebrates, such as worms, and some amphibians, including a variety of lizards, can regrow their limbs after they are lost. This renders a tragedy into a minor inconvenience. Humans, you may have heard, do not possess this ability. But, since we are all evolved from the same basic life forms, we do carry some of the genes other animals do which could allow this to happen in us. The question is how to enact them without turning the person into something horrible. Simply put, if, by activating a specific gene, we also force the person to grow scales and gills, this is not helpful.

In other words, work still needs to be done.

That’s the bad news. The good news is that scientists are doing it.

The other day I wrote about bad science. Using assumptions instead of data, excluding any data that didn’t fit your preconceived notions, and so on. Quick update there, cell phones still don’t make people grow horns.

Today’s blog is about good science.

Before I dive into all of this, I have to give a shout out to the director of Alita: Battle Angel, James Cameron. If that seems like a non sequitor, allow me to explain. He, and his special effects team, hooked up with Open Bionics to create completely functional artificial limbs for young children. Those are usually the ones who can least afford this kind of tech since their bodies are constantly growing.

Much to everyone’s surprise, they pulled it off. They now have designer limbs for kids that they can afford. CLICK HERE to watch the video. It’s pretty awesome. The first recipient was a young lady named Tilly. This is her pic. 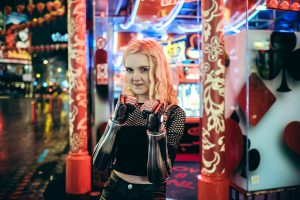 Here’s what Open Bionics, and Tilly’s mom, had to say about it.

Alita: Battle Angel is all about technological innovation and female empowerment, and Tilly is the perfect real life example of Alita; she uses her bionic arms as a sign of strength. Tilly’s mum, Sarah, said: “Tilly had come down to London thinking she was just coming for a photoshoot – so it was a complete surprise when Jon Landau and the film crew came in and presented her with her new Hero Arms, telling her she was a real-life Alita. It was an absolutely incredible experience, Tilly was left speechless which never happens.”

The Hero Arm is a 3D-printed multi-grip bionic arm for people with below elbow limb differences, and the first of its kind for children as young as eight years old. Hero Arm users like Tilly open and close their bionic hand and change grips by flexing muscles just below their elbow. Users can also swap covers to match their style, and we plan to release Alita: Battle Angel covers later in 2019.

Those covers are out now, in case you feel like showing off some shiny new limbs.

Another shout out has to go to the nice people over eat the Human Limb Regeneration page. Just like it sounds, it’s a repository for all ongoing research.

If this is a subject that interests you, bookmark them. For today’s blog I’m going to be using the source material created by the scientists.

Kristin Houser, over at Futurism, tells about a device that works. When added to frogs who’ve lost their limbs, they can grow new, functional, ones.

But using a hormone-containing bioreactor designed to facilitate tissue engineering, researchers from Tufts University were able to help frogs with amputated limbs regrow ones far more like those they lost. Eventually, the research could make the leap to mammals.

The researchers describe the device in a study published November 6 in the journal Cell Reports.

First, they 3D printed a silicon bioreactor and filled it with a hydrogel containing regeneration-promoting silk proteins. After they amputated the hind limbs of the test frogs, the researchers split the animals into three groups.

They sutured the hydrogel-filled bioreactors over what remained of the hindlimbs of the frogs in one group. They did the same for the frogs in the second group, but first added the hormone progesterone to the hydrogel as previous research showed it could help repair nerves, blood vessels, and bone tissues. The third group served as the control.

After 24 hours, the researchers removed the bioreactors.

Over the course of the next 9.5 months, the frogs in both the control and hydrogel-only groups regrew the typical spike-like limbs. However, the frogs in the progesterone group grew paddle-shaped limbs more similar in both form and function to their natural ones.

The researchers claim in a press release that they they hope to replicate their bioreactor experiment in mammals, so perhaps one day, humans could join the list of animals with regenerative abilities — we might just need a little help from science.

John Christian, also over at Futurism, looks at another process which is also showing promise.

Limb Bulb
The just-published research in the prestigious journal Science details how Gehrke and colleagues sequenced the genetic code of the three-banded panther worm, a Bermuda species with the Gecko-like ability to regrow much of its body after an injury.

The team’s unexpected finding: a “master control gene” they call the “early growth response” — a switch, essentially, that they can flip on or off to activate a whole slew of genetic code that controls the worm’s power to regenerate its lost flesh.

Leg Roll
The extraordinary thing, according to the team, is that the same early gene switch that controls the worms’ power of regrowth is present in many other species — including humans. The bad news: in humans, the gene only seems to work at a cellular level.

But the scientists are hopeful that the complex array of genes affected by the newly-discovered switch could lead to treatments allowing patients to regenerate entire lost limbs.

“It’s a very natural question to look at the natural world and think, if a gecko can do this, why can’t I?” evolutionary biologist Mansi Srivastava, who led the research, told the Harvard Gazette. “There are many species that can regenerate, and others that can’t, but it turns out if you compare genomes across all animals, most of the genes that we have are also in the three-banded panther worm.”

So there you go. You and a three-banded panther worm are cousins.

My novel series, THE BRITTLE RIDERS, is about genetic manipulation gone horribly wrong. Well, in my defense, had it gone right it would have made a boring story. Anyway, in researching the book I sat down with some theoretical geneticists and tried not to have nightmares for the rest of my life.

Anyway, I summed up my research for Science Fantasy Hub and they posted it for others to see. If you have a minute, check it out,. But, in essence, I showed that we have more in common with reptiles and lower mammals than you might be comfortable with. I also showed that human genes could be manipulated to create chimeras such as minotaurs, succubi, and so on.

So that was fun.

Good for my book. Bad for my brain.

Harvard University has a great precis on how studying the axolotl (a salamander) can help us learn how humans can regrow limbs. It’s a vertebrate, like us, goes through stages of growth, like us, and retains the ability to regrow limbs for its entire life, unlike us.

I’ll give you a tantalizing peek at what they’re doing.

While there are no known mammals that can fully regenerate missing appendages, many harbor hints of regenerative potential—humans included. It has been observed that mice can regenerate the tips of their toes, though loss further up the foot results in the same scarring that humans see after amputation. Humans have also been known to regenerate the tips of the fingers, including the bone and skin. Multiple clinical reports in the past decades have documented such instances following traumatic injury. Unfortunately, this response gets weaker as the site of loss occurs closer to the palm. While this ability has undoubtedly helped some people in the event a traumatic injury, it is a far cry from the axolotl’s ability to regenerate a fully-formed limb with all of its normal muscles, cartilage, and other tissues.

Here’s where we’re at. We can’t regrow limbs yet but we can effectively replace them, bionically, and we have found the means to justify further research to grow them organically.

Not a bad day.