It’s 2019. The past, lurid and confining, is behind us. Right? I mean …. oh, seriously? Okay. I surrender. We’ll do this again until people get it straight. Women have been doing the science thing for a bit and we’d probably be staring at the moon, instead of walking on it, were it not for them. But, as the World News Center official girlfriend discovered, this is not important news. One nice human took time out of his busy day to enumerate on all the men who were behind the photograph of the black hole which became public this week. However, as my buddy Father Julio noted, they may have been on the bus, but a woman was driving it. And that woman was named Katie Bouman. Before I get to her, and her amazing accomplishment, I thought I’d take a moment to provide a refresher course in human history.

The only human ever to win two Nobel prizes in different sciences was a woman. Her name was Marie Curie. She shared the Physics prize wither her husband, Pierre Curie, and then won it all by herself in 1911 for Chemistry. Male, female, not really sure. It doesn’t matter. She’s the only person who ever accomplished this feat.

Her achievements include the development of the theory of radioactivity (a term that she coined), techniques for isolating radioactive isotopes, and the discovery of two elements, polonium and radium. Under her direction, the world’s first studies into the treatment of neoplasms were conducted using radioactive isotopes. She founded the Curie Institutes in Paris and in Warsaw, which remain major centers of medical research today. Bonus? During World War I, she developed mobile radiography units to provide X-ray services to field hospitals.

Just FYI, she named polonium after her native country, Poland.

To recap, one woman was responsible for the basis of most modern medical diagnoses. That’s kind of important.

In the 1960’s a nice lady named Margaret Hamilton came up with some silly computer code which allowed scientists to throw people off the planet and land them on the moon. The stack of documents she created was over five feet tall and contained math others thought impossible. She currently owns, yes – she’s still alive, Hamilton Technologies and is responsible for some of the most cutting edge space science in the world.

She’s also the 2011 recipient of the Presidential Medal of Freedom for her work in developing the software used by NASA in the Apollo flights. Fun fact? Her research is still the basis of all space flights. Every fucking one of them.

That’s kind of important too.

In 1979, the same year I graduated High School, Ruzena Bajcsy invented a robot that could sense, and respond to, its surroundings. She was the founding Director of the University of Pennsylvania’s General Robotics and Active Sensory Perception (GRASP) Laboratory, and a member of the Neurosciences Institute in the School of Medicine. She has also been head of the National Science Foundation’s Computer and Information Science and Engineering Directorate, with authority over a $500 million budget. At Pennsylvania, she supervised at least 26 doctoral students who received their Ph.D.

That research has spawned the basic underpinning of the quest for artificial intelligence. If a being can understand, and respond to, its surroundings, it’s theoretically capable of learning from them. More immediately, those robotic devices are the basis for artificial limbs that allow amputees to grasp objects, walk unaided, and so on.

You know what? That’s important.

Now we can talk about Katie Bouman. She’s 29, she’s crazy smart, and she’s not using the internet to swipe left on Tinder. Well, maybe she is. Who cares? Without her, we wouldn’t have this amazing image of a black hole. Okay, technically, it’s an image of everything around, and doomed by, a black hole since a black hole doesn’t emit light. And, yes, there are men, exclusively men, who damn her for that lack.

I’ll let The Washington Post tell you all about her.

First came the breathtaking image, the first one to ever show a black hole, in a galaxy about 55 million light-years from Earth.

Then came the giddy realization that the remarkable, years-in-the-making moment would not have been possible without the work of a 29-year-old female scientist, who has now claimed a special spot in history.

Katherine Bouman, a postdoctoral researcher at the Harvard-Smithsonian Center for Astrophysics, created an algorithm that assembled the one-of-a-kind picture. And after the image was unveiled to the world on Wednesday, Bouman began earning accolades from fellow scientists, historians and politicians for her significant achievement.

“Given the extent of the use of ‘historic’ today, we are unashamedly and legitimately jumping on the #BlackHolePicture bandwagon. Congratulations Dr. Bouman!” the Royal Historical Society wrote on social media.

Bouman started working on an algorithm as a graduate student at the Massachusetts Institute of Technology, studying electrical engineering and computer science.

According to The Washington Post’s Ben Guarino:

“She was one of about three dozen computer scientists who used algorithms to process data gathered by the Event Horizon Telescope project, a worldwide collaboration of astronomers, engineers and mathematicians.

“Telescopes around the world collected high-frequency radio waves from the vicinity of Messier 87, a supermassive black hole 54 million light-years away. But atmospheric disturbance and the spareness of the measurements meant ‘an infinite number of possible images’ could explain the data, Bouman said. Well-designed algorithms had to crunch through the chaos.”

Okay, not all, but enough.

She has been lauded by scientists, politicians, universities, and anyone else who values science.

Just looking at the unbridled joy on her face makes me happy. Knowing that science can use her research to more clearly define the universe, and our place in it, just adds to my glee.

How important is this? Well, the Barbie account on Twitter, which is followed by a quarter million Barbie-philes, yes – that’s a thing, went out if its way to laud her. Young women all over the world suddenly have a role model with a believable body and an enviable brain.

That, my friends, is important too.

Back in 2002, Katie Svitil, of Discover Magazine, compiled a list of the fifty most important women scientists at that time. Many are still alive, and all are worth knowing.

Maybe a visual aid is in order. On September 24, 2014, India became the first country in the world to successfully land its first rover on Mars. No backup, nothing. Just shot it into space and it went where, and did what, it was supposed to.

Take a gander at the scientists who did that. 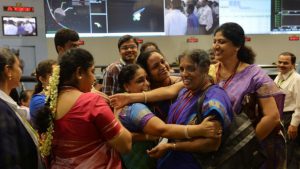 The only thng that could make this whole thing cooler is a rap song by female particle physicists.

You knew I would, didn’t you? If not you haven’t been paying attention.

https://youtu.be/j50ZssEojtM
Listen to Bill McCormick on WBIG (FOX! Sports) every Friday around 9:10 AM.
contact Bill McCormick
Your Ad Can Be Here Now!