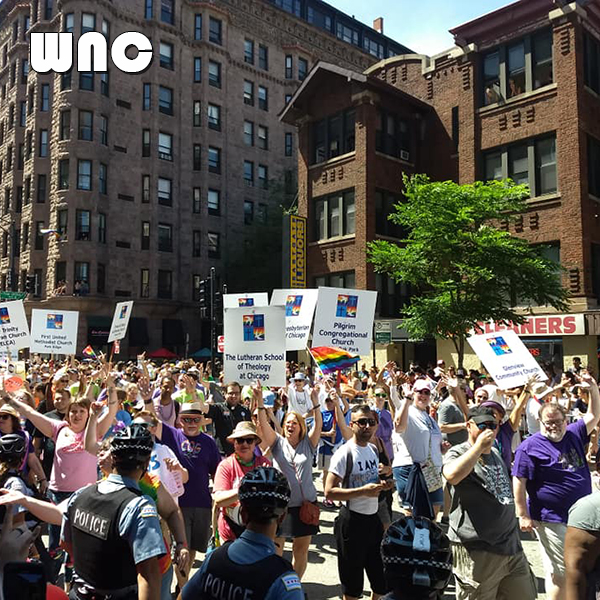 News
Yesterday the World News Center’s official girlfriend and I joined the Center for Inclusivity as part of a group to allow parade participants to pass by a group of protesters without having to hear their hateful speech. And, dear God, was it hateful. This was our second year doing this and it seems to be becoming more important than ever for those of us not directly impacted by their hate to stand up, stand firm, and denounce it. For the record, it worked. Denied the ability to call marchers fags and dykes, admitting they refused to accept transexuals at all, and proclaiming anything else their limited vocabularies could disgorge, they took their megaphones and went home before the parade ended. So score one for the pride people. For that I am grateful. But listening to their litany of perceived affronts became draining after a while. Especially, as they blathered on, it became apparent they had no clue what they were actually talking about. It was just one hate filled fallacy after another. And, worse, it was scattered all across the bile spectrum. They were there to hate gays, of course, but also a laundry list of others.

But that’s not all. They hate Muslims. With a dripping passion. Calling them animals and inhuman at every turn. You know, 9/11 ya’ll, but nary a word about the numerous people who’ve been killed by home grown terrorists. A number which far outstrips anything that happened on 9/11.

And, don’t worry, they didn’t forget the Catholics. Which was funny to me since the bible they cherry pick hate from is the one created by the Catholic church. Anyway, all priests are pedophiles. As are all gays. Therefore all gays are Catholic.

Got it? Yeah, don’t feel bad, neither did I.

I suppose I’d better not tell them about the gay saints Sergius and Bacchus. Not that they could pronounce their names anyway but they have enough on their hate plate for now.

They also added any allies to their pile. Cops who won’t kill gays for being gay? They must be purged. Businesses that serve gays? They must be shuttered. Boy Scouts who refuse to toe their restrictive line? They must be shunned as the moral deficients they clearly are. Religions which actually adhere to the teachings of Christ, who had nothing to say about “the gays” but a lot to say about false prophets, must be destroyed in fire.

Also, good news for the double X chromosomes among us, they didn’t forget women. Even going so far as to have their token representative from the Handmaids’ Tale there to remind women to dress down and be subservient. Or, as the witty one of the group reminded us, women need to get back in the kitchen where they belong. Let’s just say they’re not really enlightened and leave it at that.

Nor did they forget “the blacks.” Accusing them of all sorts of easily debunked myths. The odd part of this rant, which was echoed by all of them, is that black lives don’t matter because black women have abortions. Anyone else, not black, who has one was conveniently left out of their screed.

Speaking of God, they thanked Him, conveniently ignoring the biblical Asherah, for presidents Bush and Trump. It is the latter who is helping bring back the moral America they pretend once existed.

On and on it went, finally devolving into a bizarre form of Kabuki theater. They would ramp up the vitriol, those with us would ramp up the volume, the latter would drown out the former, and the marchers would come by and do stuff just to piss off the protesters. Men would kiss men, women would kiss women, one dude kissed me, many glorious asses, of all gender identities, took a moment out of their busy day to twerk in the direction of the Nazi wannabes, various and sundry middle fingers were raised, and, at the end of the day, all of the people who weren’t Nazi wannabes had a great time.

The thing about the protesters is that they’re not there to accomplish anything. They want a confrontation. They want someone to go off on them. They want proof that the people they marginalize are animals and should be treated as such.

They didn’t get that yesterday. They never have. I doubt they ever will. You see, unlike them, the people they hate are civilized.