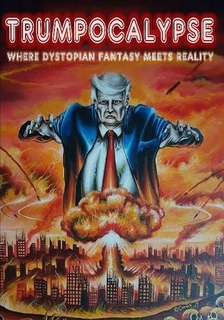 You have to say it several times before it sinks in. Donald J. Trump is the president of the United States. To tackle how this came to be I’ll fall back on the old axiom, write about what you know. Much has been made of his connections with the alt-right movement. Think of them as Nazi-Lite. They have all the cool gear with none of the actual drive. One thing they do have, however, is a dedication to particular forms of fantasies. I’m not talking about porn, although God knows that’s got a solid base in red states, but about the stuff they think can happen in the real world. You or I watch a film and think, “Cool, that was a fun way to kill a couple of hours.” Maybe we fantasize about the upcoming love scene between Gal Gadot and Halle Berry. But, at the end of the day, we know it’s all fiction. A fantasy designed for our entertainment.

Since I write I thought I’d take a look at what they read.

The same separation I mentioned above is not true for the alt-right. If you pop over to GoodReads, a nifty site that promotes my fiction stuff from time to time, you will find an entire section designed for alt-right readers. And it is a fascinating list. Almost exclusively political, most of it centers on how “others” think and how to build on what they have done but use it for the alt-right advantage. The titles often seem scholarly, and are in some cases, but they all perpetuate the idea of “them” being different than “us.”

Over at Reddit the list is even more blunt. They are laden with blame for whoever is causing the alt-right problems.

Hint; if you pick Muslims or Jews you win an alt-right prize.

The action genre is big there too. Clive Cussler is, by far, the most popular. Tom Clancy, pre video game books, is up there too but he’s considered too cerebral by many. After all, he understands nuance as well as paranoia. Nuance isn’t big on the alt-right.

Basically, a lone individual, or small group, works outside of government parameters to make “bad guys” go away. More often than not the putative bad guys find themselves eating a bullet or two. If violent explosions can be worked in for no reason whatsoever, the better for all.

To be fair, Cussler is not an alt-right kind of guy. He writes terse stories, pimps NUMA, which I must laud, manages to add himself as a character, something I loathe, and blows stuff up good. Nothing wrong with that unless you read it and think that’s how the world should work.

Those two points of view dovetail, in terrifying ways, with each other.

Now take those points of view and add in Donald Trump.

Misogyny? You mean he knows how to keep a woman in her place? Hell yeah, he’s my kind of guy.

Bigotry? You mean he knows how to keep a lesser human in their place? Hell yeah, he’s my kind of guy. He’s just protecting his interests when he keeps those people out.

Ripping off business partners? Hell, not everything works out, that’s just the way things are in business.

Bullying? Quit being a wuss. Be a man. My daddy whupped the tar outta me and I turned out fine.

Memo from the real world: no, no you didn’t.

I could go on but you get the point. What the left viewed as egregious insults, the alt-right took to be compliments. He was, and is, one of them. He gets them. And, let’s be fair here as well, they haven’t exactly been loved by anyone else. Nor have they been given the option to gather a wider world view. They are the direct result of isolationism and reduced education.

Now I, no more than anyone else, have any idea how a Trump presidency will play out. I fear the worst but he could easily betray those who got him there just as quickly as he has everyone else in his life. Just ask his first two wives or the thousands of contractors who have taken him to court. They weren’t doing that because they missed him.

One thing’s for certain, the next four years are going to be unlike anything this country has ever seen before.