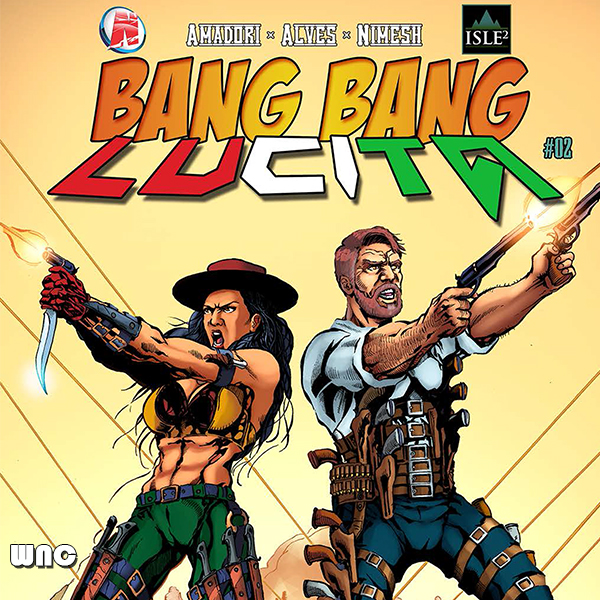 Reviews
These indy-comic reviews are really making me new friends. People seem to like being introduced to new artists and artists seem to like being introduced to new people. In other words, if you’re a comic creator looking for a review, feel free to email us. We make a simple deal with all authors. We will never post a bad review. If we don’t like it we’ll tell you, but that’s it. No one here at World News Center is into trying to ruin careers. Especially when those people tend to come back and become J.K. Rowling or someone like that.

Today we’re going to take a look at another Chuck Amadori release. Unlike his horror based stories of before this one is a, mature themed, action adventure piece set in the old west. Without further preamble, let’s just dive right in.

The heroine of the story is a cook named Lucita who is treated like dirt by a bigoted bar owner. He acts as though Mexicans and Native Americans are subhuman. He doesn’t appreciate her culinary or social skills.

The story begins with the arrival of President Ulysses S. Grant in the dusty town of Harrisburg, somewhere in the old west. He’s met by the bar owner whom he takes and immediate dislike to him. Grant is, accurately, portrayed a military man who has great respect for those he’s faced. He’s also portrayed as a man with all the skills of Rambo, much to the delight of the story.

The story begins with the kidnapping of Grant’s wife, Julia, who benefits from the comic tradition of making historical women beautiful. In real life she was a tad plain.

The kidnapping occurs at an official dinner honoring Grant’s arrival. The kidnappers are stone cold killers. Just when things look their darkest, Lucita comes to the rescue. It’s then we’re introduced to her catch phrase, BANG BANG, which she utters as she throws a knife through the skull of one of the kidnappers.

As you might imagine this is an action packed adventure.

The art, by Edson Alves, is bold and clean. The colors, by Nimesh Morarji, pop off the page. The combination of their skills highlights the story perfectly. You get the feel of the old west being a real world place and not the romanticized, color washed, version as it’s normally portrayed.

Simply put, BANG BANG LUCITA, is a fun romp through historical fiction. You’ll like the story, fall in love with Lucita (who comes across like a sane version of an ex of mine whom she’s a dead ringer for), and never look at Ulysses S. Grant the same way again. This is definitely worth your time and money.