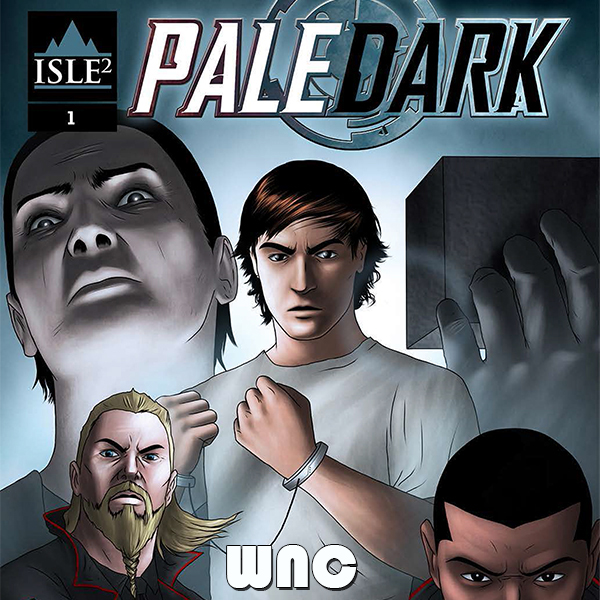 Reviews
This has really turned out to be a good idea. People seem to like being introduced to new artists and artists seem to like being introduced to new people. In other words, if you’re a comic creator looking for a review, feel free to email us. We make a simple deal with all authors. We will never post a bad review. If we don’t like it we’ll tell you, but that’s it. No one here at World News Center is into causing new artists harm or making them look foolish. Especially when those people tend to come back and become J.K. Rowling or someone like that.

Today’s a special treat. I’ve already reviewed Empress which was written by Carl Amadori. He’s back … maybe I should say HEEEEE’S BAAAAACK! Maybe not. Anyway Pale Dark is a new series written by him that’s designed to curl your toes.

This review covers issues 1 through 6, released by Isle Squared Comics.

Pale Dark is a strange story. It has some familiar tropes such as a multi-verse, a vague villain, and a secret rebellion led by stern, but fair, ex-military personnel. I think they are there just to give readers a lifeline to hold on to as the story lurches forward and sideways. Pale Dark twists and turns its way through allegiances, both real and imagined, as the protagonist, a naif known only as Subject K, tries to figure out what is happening to him and why.

The villain is a guy known only as The Pale Man. Both his enemies and his followers call him that. He manipulates his victims through torture, both physical and mental. His minions are all sycophants, some coerced, others willing. He abuses a doctor who is forced to do his bidding, in an attempt to discover some sort of serum that has eluded him all his life. He has her daughter somewhere and won’t let her see her unless, and until, she solves the problem. So far she’s been in his “employ” for four years. She may, or may not, be sympathetic to the plight of Subject K and the others in the Pale Man’s prison.

The prison itself is a thing of beauty. Hidden away from earth, one of them anyway, it allows the Pale Man to play god. In some scenes he intimates that he actually is a deity. Maybe even the one we’re supposed to worship.

Amadori plays fast and loose with the possible interpretations of reality, letting the reader forge ideas on their own. The technique works best when one is trying to figure out who is really helping who.

There is a sub-plot concerning a Lieutenant named Spez whose brain has been “tattooed.” That process involves a combination of psychotropic drugs and hypnosis. In Spez’ case it’s left his mind a collection of unfocused, random, thoughts that may, or may not, mean something important.

I should note that the art, done initially by Raul Abril, and later by Alex Reis, fastens your attention on shifting details. Things that can’t be right next to things you believe are. It’s a subtle, yet useful, way of filling in the back story without wasting time telling it.

I don’t want to give away the plot but if you’re a fan of tightly written suspense and sci-fi, Pale Dark is for you.

Pale Dark can be found here: