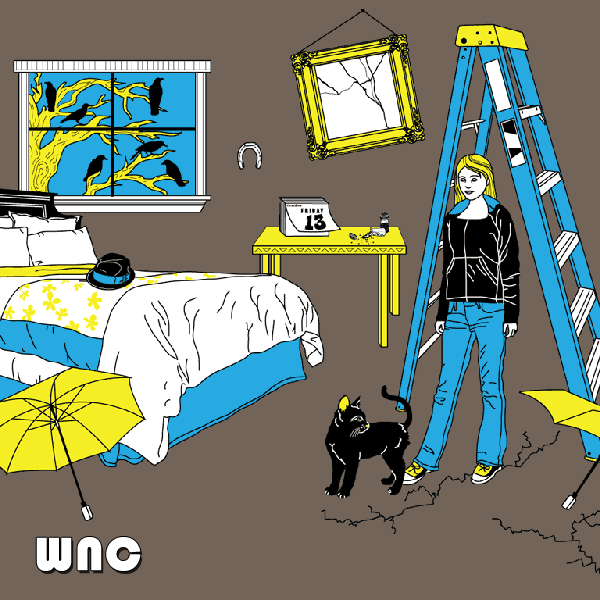 If you happen to be a prestidigitating paraskevidekatriaphobic then today is wrought with horrible magic for you. For the rest of us it’s another day that’s just as good or bad as any other. Today, if you watch the news, you will be assaulted with lists of all the horrible things that have happened on Friday the 13th through the years. The first will be the fall of the Knights Templar at the duplicitous hands of King Philip IV of France and Pope Clement V on Friday the 13th in October of 1307. That one’s a juicy one since it features the only publicly recorded curse attributed to God. Jacques de Molay, as he was about to be burned at the stake, claimed that God would strike both Philip and Clement dead for their deeds and, indeed, both men were dead within less than two months.

You will also hear from many noodle headed experts who will claim this is an ancient tradition, some will say dating back to the bible. These people are, using the technical term, deluded morons. Fridays have been bad news for a while, even Chaucer wrote disparagingly about them in his Canterbury Tales back in the 1,400’s. And the number 13 has, for reasons lost in the mists of time, been one to avoid since Babylon reigned supreme in the Middle East. It is even highly likely that Jesus knew about the superstition and selected the number of His apostles to prove the belief baseless. That would fit well with many of His reality based teachings.

But for any reference specific to Friday the 13th you need to be far more modern.

In 1907 an author named Thomas Lawson released a novel called “Friday the 13th.” In it a man uses superstition and greed to con a bunch of people and manipulate the stock market and cause it to crash. It was a popular book at the time and is also the first recorded use of Friday the 13th. So much for ancient and mystical. If you’re over 50, your grandparents could have had a slightly used copy of this book.

They may have even noted the eerie similarities in his book to the real stock market crash of 1929.

Still other featherheads will point to the 1993 study published in the British Medical Journal which compared the number of auto accidents on any given Friday the 6th versus Friday the 13th and said “Friday the 13th is unlucky for some. The risk of hospital admission as a result of a transport accident may be increased by as much as 52 percent. Staying home is recommended.”

Smart people just went “Hey, wait a minute, that research is horribly flawed.” And they are 100% right. When you compare Friday the 13th with other stressful days such as tax day, major holidays and so on, the accident rate falls right into the norm. In other words, events that cause people to stress out also cause them to become distracted and those distractions lead to accidents.

You know that phrase “It’s all in your head?” Well, in this case it’s true.

Just FYI, the word paraskevidekatriaphobic comes from the Greek; Paraskevi means Friday and dekatreis means 13. You can also call the fear of Friday the 13th Friggatriskaidekaphobia in honor of the Norse God Frigga whose name is where the word Friday comes from.

Yeah, a little etymology to brighten your day.

Okay, now for some meaningless fun.

In Spanish speaking countries, people fear Tuesday the Thirteenth or Martes Trece as it is called. The reason is that that was the day that Constantinople fell to the Ottoman Empire. That tradition does date back hundreds of years and is well documented.

In Italy, home of the Catholic Church and what many believe to be the root of the superstition, the number 13 is considered lucky and the day they avoid is Friday the 17th. So, go figure.

Some folks can’t resist tweaking their noses at superstitions. Black Sabbath released their debut album on Friday the 13th in February of 1970 and they did okay. The 13th book of A Series of Unfortunate Events by Lemony Snicket (a/k/a Daniel Handler) was released on Friday, October 13th, 2006 and he’s made goo-gobs (that’s a financial term) of money. And Adventure/Quest World, an online video game featuring the music of one of my faves, Voltaire, features famous guests every Friday the 13th.

This year there will be three Friday the 13ths and they are spaced 13 weeks apart.

But, far be it for me to deny you something legitimate to worry about. On April 13, 2029 (a Friday), the asteroid 99942 Apophis (named after an angry Egyptian god) will come so close to the earth that it will be closer to our atmosphere than our man made satellites. If it gets caught in our gravity well it could do damage of apocalyptic proportions.

Or it could just ricochet harmlessly off into space.