You are here: Home / Joining the Green Gang
When I was a kid my grandmother, a devout Catholic, had an interesting phrase she used to say. “Nature takes its own.” It was her, slightly pagan, take on the whole “Ashes to ashes, dust to dust” thing from Genesis. It also served as a reminder of her second favorite phrase, “The bible says the world is without end. It says nothing of man.” While her theology might have been a little skewed it worked for her. One thing she did harp on is that we were supposed to be custodians of the Earth. Being top of the food chain meant we had a great responsibility to all around us. I can honestly think of worse philosophies. She kept a garden, raised flowers, bred dogs and, with my grandfather, fed and kept squirrels and bees. Because of them I never grew up with a fear of nature. That had its good points and bad.

Let’s start by taking a look at a few of the bad things that man is doing right now. There is an unsubtle irony that rising waters are going to render NASA, the home of climate research, useless in a few decades if the trend isn’t reversed. The walls that some are trying to have built around Miami and other places in Florida are short term stop gaps, at best.

But, as my granny would say, God does have a sense of humor. Which is why, the home of the constant obfuscation and denial when it comes to climate change, Washington D.C., is sinking.

John Johnson tells us all about it.

It sounds like a metaphor but is geological reality: Washington, DC, is sinking. In fact, researchers led by a team at the University of Vermont predict that the ground will drop another six inches by the end of the century, reports UPI. The cause isn’t man-made: It’s the result of an age-old geologic process that will continue to unfold for thousands of years. But it’s presenting the DC region with a dangerous double-whammy—the ground is sinking at the same time that sea levels are rising because of warming temperatures, say the UV researchers. The study confirms a long-held theory on why sea levels around DC are rising faster than any other stretch along the coast, reports the Washington Post.

“Right now is the time to start making preparations,” says lead study author Ben DeJong. “Six extra inches of water really matters in this part of the world.” He and his team drilled dozens of boreholes around the Chesapeake Bay to figure out what’s happening. The culprit is an ancient ice sheet that covered much of North America, then retreated, and the land is oh-so-slowly settling back into place. DC was actually in an area just outside the sheet and “bulged upward,” as the Post puts it. “It’s a bit like sitting on one side of a water bed filled with very thick honey,” says DeJong. “Then the other side goes up. But when you stand, the bulge comes down again.”

At least that one’s not our fault. Just bad planning. Although rising water levels due to warming could exacerbate the problem in unforeseen ways. Swimming at the Smithsonian anyone?

But one that is our fault is happening in the wonderfully backwards state of Arizona. Rob Quinn says that the state is literally fracking Phoenix into a pit.

Researchers say that while there’s no need for residents of Phoenix to panic, parts of their city are slowly and unstoppably sinking into the ground. Land subsidence caused by the extraction of huge quantities of groundwater over the decades is to blame, and the Arizona State University researchers say it’s causing some parts of the metropolitan area to sink by roughly 0.75 inches a year, Sonoran News reports. Residents may not notice much change year to year, the researchers say, but over time, the problem will affect things like canals, utility lines, and sewers and, eventually, the foundations of buildings. The depletion of groundwater has changed the sediment under the area, so the drop is irreversible.

The lead researcher tells the Arizona Republic that the subsidence has “the potential to cause costly structural damages, and is something to keep an eye on.” The sinking is happening at an uneven rate—with some areas actually rising a little—meaning floodwaters could cause major problems in affected areas. Another problem, the lead researcher warns, is that the sediment changes have left the ground unable to store as much water as it used to. “We live in a desert, and our underground canteen is getting smaller,” she tells the News. The Republic notes that the problem is widespread across the US, with Denver, parts of California, and the New Jersey coast among the many areas starting to sink.

Just FYI, in case the above wasn’t clear, fracking uses a ton of groundwater.

Also, as noted above, the constant mining of subsurface water is also to blame. And, while not sinking at the moment, Oklahoma has seen a meteoric rise in the number of Earthquakes in ares where fracking is practiced. That leads to weakened infrastructures such as sewer lines, roads (which require stable beds) and pretty much anything you thought was built on solid ground.

Things like businesses and homes and stuff. Maybe they don’t need those in Oklahoma.

So, where is the good news? East of here. As in the Far East.

In countries where they don’t use harmful methods of energy extraction or have come around to the fact that maybe, just maybe, we might not want to kill the planet, they are taking measures to reduce the human imprint. And they are using some creative methods to accomplish that goal.

Dan Lewis reports that China is surrounding the Gobi Desert with billions of trees to stop dust storms and encroachment. He also reports its working.

And in 2014, the Daily Mail echoed these results, reporting that “a study says the measures are working, despite previous criticism.”

There are still problems. Trees tend to wither and die in desert conditions. So they are having to reroute water to stabilize the environment. The good news is that, as China clamps down on pollutants around the country, they have more fresh water to work with than ever before.

But, because China is still China, one of the methods they are using to save and reroute water, the Three Gorges Dam, is so large it will alter the rotation of the Earth.

Raising 39 trillion kilograms of water 175 meters above sea level will increase the Earth’s moment of inertia and thus slow its rotation. However, the effect would extremely small. NASA scientists calculated that shift of such as mass would increase the length of day by only 0.06 microseconds and make the Earth only very slightly more round in the middle and flat on the top. It would shift the pole position by about two centimeters (0.8 inch). Note that a shift in any object’s mass on the Earth relative to its axis of rotation will change its moment of inertia, although most shifts are too small to be measured (but they can be calculated).

Just remember this when someone tells you that man can’t alter anything on Earth.

Speaking of trees, and here altering the Earth in a good way, Amanda Froelich reports that Milan Italy is building the world’s largest vertical forest.

In an age where harmonious innovation is becoming more celebrated, sustainable designs to preserve the Earth and contribute to wellbeing are being implemented at a rapid rate. One such innovation to recently be accepted for development is a vertical forest designed by Stefan Boeri Architects.

The first ever vertical forest will soon be the greenest building in Milan. Because the average household in a city produces approximately 25-30 tons of CO2 per year, implementing greener architecture in highly populated areas cannot come soon enough.

This stunning development is part of a vision presented by BioMilano which promises to incorporate 60 abandoned farms into a greenbelt surrounding the city. Part of the mission is to create a vertical forest building which boasts a stunning green façade planted with dense forest systems to provide microclimate and to filter out polluting dust particles. According to Inhabit, there are two buildings currently under construction.

The greener architecture will help absorb CO2, oxygenate the air, moderate extreme temperatures, and lower noise pollution. The bio-canopy is not only aesthetically pleasing to the eye, but it helps lower living costs.

So it saves money, makes living in a city healthier and helps the earth be a better place to live. Bonus? It’s pretty too. Here’s a pic.

But how do you put all of those ideas together? How do you stop erosion while simultaneously upgrading the planet?

Amy Frearson says that one answer is to build a really fucking cool school and that Vo Trong Nghia is doing just that.

According to Vo Trong Nghia Architects, the structure is intended to promote sustainable development in Vietnam, in response to rapid industrialisation that causes frequent power shortages, increasing temperatures, high levels of pollution and reduced green space.

“It is our goal to create a green university building that counters these problems as well as instils sustainable practices to these future generations,” said the design team.

Creating 11,000 square metres of floor space, the seven-storey facility will feature a prefabricated modular concrete structure that can flexibly accommodate different uses, while also keeping construction costs to a minimum.

The building is orientated to face the prevailing wind, allowing for efficient cross ventilation, and large trees positioned in front of every window will help to lower the temperature of the air flow through the interior.

A shallow plan will also allow daylight to permeate each storey, reducing the need for artificial lighting.

Vo Trong Nghia Architects – whose previous projects include a naturally ventilated school and a thatched bamboo bar – says the structure provides an alternative to the air-conditioning-reliant buildings that dominate South-East Asia.

That’s important because not only does it reduce waste created by artificial air systems it reduces, dramatically, the amount of power needed for people to live.

Bonus? It’s pretty damn pretty too. Here’s a rendering from the architect. 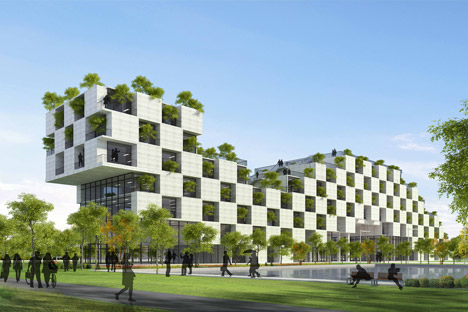 Look at it this way, if monkeys and other primates really are evolving to full sentience (spoiler alert: they are) at least we’ll leave them a nice place to live.