You are here: Home / Radio Ta-Tas

Last week, at the behest of a few listeners, I popped up a summary of what was to come on the radio show and a few extra bits for folks at home to enjoy. That turned out to be mind numbingly popular so I’m going to do it again. I’m easy to manipulate. Also, for the right fee, I will do children’s parties. Ah, just kidding, I’m not even sure if it’s legal for me to be near kids in the first place. Bachelorette parties, on the other hand, are good to go. Just FYI, Google’s spell check wanted me to change Bachelorette, which is spelled correctly, to bacteriologist. That, kids, is why you NEVER edit with spell check. Anyway, since I’m in a sciencey mood this week I figured I’d do a breakdown of some of the cooler things happening right now. Cooler even than the pic to your left of the WNC weekly podcast which gets recorded on WBIG 1280 AM.

All right, on to the fun.

Let’s be honest with each other here for a moment. You live in fear of dying before you get to enjoy the glorious world of manned robo-warriors facing off in death matches. I know that since we are a lot alike, you and I. Well, Sunshine, I have some good news for you. TEAM USA has challenged TEAM JAPAN to a giant robot duel and that challenge has been accepted. Images of both robots are below. 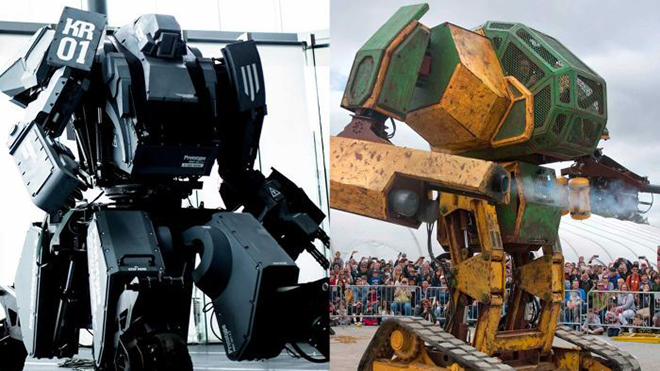 Now what do you do with all the resulting tech that will come from this? Quite a bit actually. Dr. Chauncey Siemens, from I Fucking Love Science, says that one use you may not have thought of is building robot bears to help people commit suicide.

SeppuKuma, which loosely translates to “Suicide Bear” has robotic arms that are able to carry up to 80kg of weight, hands that are powerful enough to crush human bone, and roller legs that can retract or extend from a base as necessary when bending to pick someone up out of bed or when maneuvering through tight spaces like doorways.

The robot weighs 140kg and it is powered by specially designed software and advanced actuators (a type of motor that controls mechanisms). SeppuKuma also offers 23 very different methods one can choose to end their life, including Everlasting Sleep (lethal injection), Pillow Kisses (suffocation), Peaceful Breath (helium asphyxia) and Sleepy time Hug which is where the robotic bear strangles its partner until their pulse stops for 15 minutes. All of these attributes enable the SeppuKuma to give it’s patient the power to choose how they get to end their own life. An official from the JSDD says that, so far, robots have never been used for this purpose in any hospital.

“We really hope that SeppuKuma will lead to advances in the Right to Die movement, it’s important to give those who want to end their lives the power to do so in a safe and responsible manner. We intend to continue with research toward more practical robots capable of providing powerful yet gentle euthanasia to elderly people and those battling with either shame or depression,” said Tsuneki Suko, leader of the Artificial Intelligence Systems Research Team at the JSDD-Orient Institute Center for Human-Interactive Robot Research.

And not only is it lethal as fuck it’s also, THANKS JAPAN, cute as a button.

See how happy she is? Don’t you want to be that happy too?

Let’s move on to healthier thoughts.

Matt Damon is starring in a new movie called The Martian. The story is simple; NASA goes to Mars, the mission goes tits up on the carpet, one guy dies, oops, dead guy’s still alive. Now what? As they say in the trailer “(you’ve got to) science the shit out of this.”

NASA has already previewed the flick and given it rave reviews. It’s based on a book by a real rocket scientist so the science is solid. Or, close enough to solid that no one’s bitching.

So how close is any of this stuff to being real? Tracey McMahon, over at NASA, says a hell of a lot closer than you think.

Without air or water humans simply cannot travel, live or work in space. Marshall is responsible for the design, construction and testing of regenerative life support hardware for the International Space Station, and maturing these technologies for the journey to Mars.

The Environmental Control and Life Support System (ECLSS) installed on the International Space Station includes two key components – the Water Recovery System and the Oxygen Generation System – that reduce the need for constant resupply of the basic needs from Earth. That leaves open valuable cargo space to carry items necessary to explore and conduct research once we reach our destination. To date, ECLSS has processed more than 25 tons of water, including 5 tons that have been converted to oxygen.

The Water Recovery System provides clean water by reclaiming wastewater, including water from crew members’ sweat and urine, cabin humidity condensation, and waste generated during spacewalks. The system filters and recycles wastewater for reuse as potable clean water, reducing by 15,000 pounds per year the net mass of water and consumables that would need to be launched from Earth to support six crew members.

The Oxygen Generation System produces oxygen necessary for the crew to breathe, as well as for replacement of oxygen lost due to experiment use, airlock depressurization, module leakage, and carbon dioxide venting. The OGS technology consists mainly of an electrolysis system, pulling oxygen from water by running an electric current through it.

Ed Mazza, another really smart person, says that, at our current pace, we could be living on Mars in fifteen years.

We’re going to Mars — and we’re going in the not-too-distant future.

NASA says preparations for a manned mission to the Red Planet are proceeding as planned, with humans expected to set foot on Mars in the 2030s.

“We are farther down the path to sending humans to Mars than at any point in NASA’s history,” NASA Administrator Charles Bolden said at an event last week, according to Space.com. “We have a lot of work to do to get humans to Mars, but we’ll get there.”

That work includes completing the development of the rockets and spacecraft that will get humans there and back again, including the Space Launch System and Orion spacecraft, which are still being tested.

The next Mars rover, planned for a 2020 launch, will carry the Mars Oxygen ISRU experiment. MOXIE, as its known, will take carbon dioxide out of the thin Martian atmosphere and produce oxygen, the space agency said.

If it can do so successfully, humans will have oxygen to breathe and rockets will be able to use that oxygen to help power the return trip home.

Andy Weir, author of “The Martian” which has been made into a film starring Matt Damon, was at the NASA event. He recently said the main barrier is funding — and that given enough money, a manned Mars mission could happen in the 2030s as planned.

“But I don’t have faith in Congress to give them enough money to make that happen, so I’m being a little more conservative,” the novelist told Space.com last month, guessing that humans would set foot on the Red Planet by 2050.

Oh, ye of little faith. I never dreamed I’d have sex with a supermodel and now, at the tender age of fifty four, I can attest that I’ve done so twice. If it can happen to me it can happen to NASA.

Also, for better or worse, the Bush administration privatized a lot of NASA’s functions by outsourcing contracts to non-government agencies. We will soon find out whether Ayn Rand was right and all corporations will do what is best for humanity or if it’ll be the Alien Hunger Games.

Either way, companies now have the financial incentive to make things like this happen.

For example, fusion power has been the butt of jokes for decades; “Fusion power is only thirty years away … and always will be.”

Those wacky theoretical physicists. Don’t forget to try the veal.

Now, David Chandler, over at MIT, yes, THAT MIT, money has magically appeared and allowed scientists to develop a true fusion reactor.

Advances in magnet technology have enabled researchers at MIT to propose a new design for a practical compact tokamak fusion reactor — and it’s one that might be realized in as little as a decade, they say. The era of practical fusion power, which could offer a nearly inexhaustible energy resource, may be coming near.

The stronger magnetic field makes it possible to produce the required magnetic confinement of the superhot plasma — that is, the working material of a fusion reaction — but in a much smaller device than those previously envisioned. The reduction in size, in turn, makes the whole system less expensive and faster to build, and also allows for some ingenious new features in the power plant design. The proposed reactor, using a tokamak (donut-shaped) geometry that is widely studied, is described in a paper in the journal Fusion Engineering and Design, co-authored by Whyte, PhD candidate Brandon Sorbom, and 11 others at MIT. The paper started as a design class taught by Whyte and became a student-led project after the class ended.

The new reactor is designed for basic research on fusion and also as a potential prototype power plant that could produce significant power. The basic reactor concept and its associated elements are based on well-tested and proven principles developed over decades of research at MIT and around the world, the team says.

Fusion, the nuclear reaction that powers the sun, involves fusing pairs of hydrogen atoms together to form helium, accompanied by enormous releases of energy. The hard part has been confining the superhot plasma — a form of electrically charged gas — while heating it to temperatures hotter than the cores of stars. This is where the magnetic fields are so important—they effectively trap the heat and particles in the hot center of the device.

In just today’s column we’ve dealt with being able to create water, air and now power on an alien world. What about food? Some fertilizer, some seeds and you’re good to go. You’ve got water. You’ve got air. You’ve got power to create a climate controlled enclosure. In other words, you’ve got food.

All in all what this means is that, right now, as you’re reading this, we have the technology to travel the solar system. We have the capability to settle an alien world. We can access resources in space to keep our settlers alive.