You are here: Home / Never Forget

This seems like a good time to repost this. Originally written on September 11, 2013. 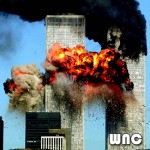 On September 11, 2001, I was starting my day as I usually did. I was at Richard’s, at the corner of Halsted and Grand, drinking grapefruit juice and coffee. Some mornings Gene Siskel would be there. This morning he wasn’t. The news was on because that’s how we rolled back then. They were showing the first tower as it burned. Details were sketchy. All anyone knew was that a plane may have crashed into the tower. People forget now how little anyone knew as the day was unfolding. Certainly no one foresaw the events that did occur. We were all fascinated by the events on the TV but no one was overly concerned. After all, it was a tragedy but nothing that affected us directly.

I remembered my buddy had a business down the block from the tower so I blew him a call to make sure he was okay. He was standing outside watching the fire with his staff. He was thinking of giving everyone the day off because he figured the fire crews would clog the street and make going home a nightmare. Suddenly, on the phone, I heard a whump, he swore and then, on TV, I saw the second plane hit. Just that quick everything changed.

My buddy, a typical White Sox fan, allegedly commandeered a vehicle at gun point and got his staff out of New York. I say allegedly since all charges were eventually dropped.

My boss at the time called me and started to list the calls I needed to make that day. I pointed out that it was doubtful that anyone would be answering a phone. He didn’t see why. After all, business must go on, right? I said that I wasn’t going to be heading to the office, at least not until I was sure that my buddy was safe, and that bothered him even more. He found the whole thing to be a terrible inconvenience.

That’s right, 9/11 was unfolding and he was irked that it was interrupting his day.

The news was chaotic and unclear as the day went on. There were demands that we retaliate. But against who?

Eventually the cheering fans of Osama bin Laden were shown on TV and we all learned the face of evil.

Pennsylvania, the Pentagon and the Towers were all targeted. Heroes emerged, fatalities were counted and life slowly came back together.

Finally, on May 2, 2011, Seal Team 6, a division of the US Marines, killed Osama bin Laden in his home in Pakistan.

And that still didn’t end our involvement in the Middle East.

Nor did it end the chance that more acts of terror will occur on our soil.

What each represents is a small group of sick, yet deadly, people who hate for hate’s sake. In many ways, they have more in common with each other than they do with any of us.

Although getting them to admit that would be a giant waste of time.

Anyway, my buddy is still in New York and still making commercials. Most of his staff is still with him. My old boss still wonders why anyone cares about this since all it does is interrupt business. None of the staff from back then is with him now.

As to me, I’m still here. As are you. And it’s up to us to make sure that world becomes a saner place.