You are here: Home / Super Cool Groovy Stuff
Okay, let’s take a break from all the “end of the world” stuff to catch back up with all of our fantasies. No, not those, you perv. I’m talking about the cinematic ones. And, no, Foreskin Gump doesn’t count as real cinema. Geez, what is in your browsing history? No, I’m talking about the plethora of super hero movies that will soon festoon our screens. While Stephen Spielberg recently predicted that this genre will go the way of the western, and I tend to agree, I would like to note that westerns had a three decade run of dominance. That’s not a bad little run. If you’d like to see a list of all the scheduled films coming your way just click here and have fun. There’s a ton of them.

A couple, Ant-Man & Fantastic Four, are already out. So let’s take a quick look at them. Ant-Man is a fun introduction to the character whom they can now use in multiple, Avengers related, movies. His fight with the Falcon is a thing of comic book joy as each has very different skills and each uses them to their advantage. The bad guy is really bad, the good guys are just bad enough to be interesting and there’s a token love interest that won’t make you squeamish. I’d give it two and a half out of four stars and admit I enjoyed it. As to Fantastic Four, let’s just say it’s a clinic on how to fuck up an easy movie. Things appear, become important, and then are never seen again. Reed Richards, the stretchy Mr. Fantastic, turns out to have the cool ability to change his facial features. He does this once and no more and it’s never explained how he learned to do it anyway. Dr. Doom attacks earth and no one knows why. For the most part he seemed to like everyone. The biggest sign you’re in trouble? Halfway through the film a lobby card pops up, just like in the old silent movies, that says One Year Later. This is a mess of a movie. I’d give it negative stars if I could.

Moving on. In TV-Land the company that brought you Arrow and The Flash is now bringing you Supergirl and The Legends of Tomorrow. I’ve written about both extensively so I won’t rehash things here. Both look promising and the casts of both have been having fun with fans. Always a good sign.

In other TV news, the wonderful world of Daredevil will be adding the Punisher this season and a/k/a Jessica Jones will be introducing Luke Cage (Hero for Hire). All of these Netflix releases will be leading up to a team that features all of the principals. But not until each of them has, at least, two seasons under their belts as solo acts. People who’ve seen footage all say that if you liked Daredevil Season One you’re going to love what they’re up to now.

In other news the nice people making Deadpool (NSFW) released an R-rated trailer for the upcoming R-rated film that will explore light hearted topics such as terminal cancer, prostitution and contract killing. You know, just like the stories mom told you as a kid. If you know what Deadpool is all about then you’re pretty stoked right now. If not, click the link, make sure no one is around, and learn. Unless you’re easily offended. Then don’t do that. Don’t even think about it. It’s got Stan Lee as an M.C. in a strip club for Christ’s sake. It will ruin your childhood.

Speaking of ruining chilhoods, The Hobbit: The Battle of the Five Armies is coming to DVD, etc., next month and has been rated R. Why? I do not know. Is there some bizarre sex scene that Peter Jackson insists on …. ahem … inserting? Was the hyper-realistic violence not hyper-realistic enough? All of the above? Oh well, if you really need to know they are also releasing the extended versions of all three films in 500 theaters nationwide. The total running time, should you wish to see all the Hobbit films back to back to back, is just under ten hours. That’s a lot of time to dedicate to a seventy page book.

In other R rated news that won’t ruin your childhood, Suicide Squad has finally wrapped up shooting. This may get cut down to a PG-13 film since it has the kid friendly Will Smith in it. Even if it does there’s a lot of room in a PG-13 film to give folks nightmares. In the cartoon version of Suicide Squad’s origin, Batman: Assault on Arkham, there’s sex and extreme violence. Harley’s a horn-dog and Deadshot is a willing, if reluctant, partner. Yes, that link will take you to the full movie. Obviously this film won’t go that far. But it will be interesting to see how far they do go.

Speaking of nightmares, imagine these two having a kid. 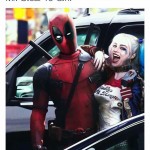 I’m sorry. I couldn’t help myself.

One film that is not being all that fan friendly, Batman -vs- Superman: Dawn of Justice (what is with all the colons lately?), accidentally released their entire plot synopsis online. Yes, you can click the link to read it if you want. If you’re one of the three people on the planet who hasn’t seen the trailer just click here to catch up. With a plot involving Batman, Superman, Lex Luthor, Doomsday, Wonder Woman, Aquaman, and a brief appearance by The Flash, this movie looks, superficially, to be a hot mess. But, from all accounts, it appears to be shaping up fine. It’s why Warner signed Ben Afflek to do three more Batman films, plus another Justice League and rushed him to Toronto to be in Suicide Squad. Originally he was just mentioned in the script.

One insider told me that the rough cut, minus a ton of effects, music, etc., recently shown to Warner Execs was “fucking astonishing.” That’s a much better review than I was able to get from anyone on Fantastic Four. The best I got there was “well, they paid for the sequel.”

Besides all the cool Netflix shows, Marvel is also gearing up for Captain America: Civil War. More colons. Anyway, as it stands right now, this will be the film they use to introduce Spiderman back into the Marvel cinematic universe. It will also not feature the Hulk. I’m not sure what they’re planning for that character but a cameo in a battle movie isn’t it. Nor is the Planet Hulk story line. Which makes me happy since I think that story was horribly overrated. But you can always click the link to check it out for yourself.

Shooting started a while back on X-Men Apocalypse but Marvel hasn’t released anything yet. They did show a brief trailer at Comicon but it was a little rough so we’ll just wait for something better. Don’t get me wrong, it looked cool, it was just rough.

The nice thing about catching up this way is that I was finally able to get all the links to everything all in one blog. Truly your one stop shopping destination.

And, just to ruin your good mood, keep in mind that Fox has every intention of releasing Fantastic Four II. Whether you want them to or not.