You are here: Home / Food and Stuff
You are what you eat is one of the most overused cliches of all time. In this case, it also happens to be true. Because people know that and not much else it also tends to be the basis for a wide variety of specious, and occasionally harmful, diet fads. The Paleo diet is a great example. First off it has nothing to do with how Paleolithic people ate. Their diet included cannibalism. Not exactly a “go to” food choice for most folks. Secondly, it is not a well balanced diet and can cause numerous health issues if actually adhered to. As some of you know I recently lost a little over 200 lbs. I did it by going to a dietitian and getting a diet designed to help me. It would not be a good diet for many others. Before I went to see her my old boss kept trying to get me to go on the Atkin’s diet. While I would have lost weight if I had done so I would also have died. It seems my body was no longer processing proteins properly. It would have, literally, clogged my heart. Because of that knowledge I tend to strongly advise people to see a medical professional before embarking on any diet. You have no way of knowing what is or is not wrong with you just by looking in a mirror.

One thing you can, and should, do is follow the government guidelines. Despite what you may have heard they don’t ban meat. They just strongly advise that you eat less of it and avoid the processed stuff as much as possible.

Sam P.K. Collins takes a look at how people who know nothing about health tend to shape guidelines.

Or, at least, they used to.

In 2012, meat industry leaders also derailed President Barack Obama’s attempt to weaken Tyson Foods’ stranglehold on rural farmers. Under the status quo, chicken farmers didn’t own the beef, pork, and chicken they raised, instead working for Tyson for a small percentage. If the Obama administration’s plans would have come to fruition, then farmers could sue meatpackers more easily and worked autonomously under what Vilsack called the “new rural economy.” However, the meat lobby killed those plans, creating what veteran agribusiness journalist Christopher Leonard described as a “spectacular failure.”

Whether the meat industry’s most recent organization strategy will be successful has yet to be seen. But if it does fail, a potential move toward a more plant-based diet could serve as a challenge to a lobbying powerhouse and possibly the final blow to a food culture that has waned in popularity in recent years.

Meat serves as the primary part of the diet in many industrialized countries, with the United States counting as the second-largest consumer per capita. Even with a 12 percent decline in meat consumption within the last decade, the average American still eats more than 200 pounds annually.

While experts contend that eating beef moderately has health benefits, attention has turned to the consequences of excess production, especially since prices have declined. For many, the risk of heart disease, diabetes, cancer, and the greater likelihood of early mortality have become too much to ignore. Additionally, a growing body of research has tied meat production to a larger carbon and water footprint, another point that has galvanized support among environmentalists, especially as California reels from a drought.

That’s why one in 10 millennials has adopted a vegan diet and one third of Americans say they’re cutting back on their meat intake. Those changes have, in part, played a role in the introduction of more vegetarian food choices in fast food restaurants.

Dietician Julieanna Hever raised these points in her op-ed that appeared in The Hill last month, speculating that there’s not much standing in the way of HHS and the USDA finalizing the dietary recommendations later this year as they appeared in February, even with the meat industry’s political connections.

“It is telling that nearly every spokesperson not representing the meat, dairy, egg, and junk food industries who provided oral comments on the committee’s report wholeheartedly embraced this recommendation,” Hever wrote. “The fact is that Americans get it. We’re already eating less meat, and many of us are trying to cut back even further. A diet richer in vegetables, fruits, beans, and grains — and lower in animal products — is what our country needs and wants. And it’s not so controversial after all.”

A quick note here to help you avoid confusion. Any moron with a tinfoil hat can claim to be a “nutritionist.” That lovely industry is entirely unregulated. A dietitian, however, has a medical degree and knows what those things inside your body are supposed to do and how to help them do it. Put simply, just because Bob down the block once fixed a lawnmower doesn’t mean you should trust him with your car.

Granted, even if you know what’s good for you it’s sometimes a pain to take the time to make it. Well, I have some good news for you. A group of scientists, inspired by Star Trek’s replicator, have built a device that can make a 100% healthy meal in thirty seconds.

And the latest example of Star Trek tech becoming reality is the Genie, a device that echoes Trek’s food replicators. Created by a pair of Israeli entrepreneurs, Ayelet Carasso and Doron Marco, it relies on pods—akin to the inner workings of espresso machines—to turn natural baking ingredients and freeze-dried fruits and vegetables into personalize meals… in just 30 seconds.

Eventually, Marco told the news service Reuters, Genie will know a person’s microbiome and will prepare the pod specifically for that person. “You will eat better, even tastier and healthier,” he said. Marco also shared his desire for the Genie to be put to use in countries without enough food to feed their populations.

“In our world, we are getting fat and we are throwing away a lot of food, (and) in their world, they don’t have any food,” he said. “So if you use Genie, you can distribute the food better, you can have the shelf life much longer without the preservatives, give the people better food for them. We can even the food distribution in the world. That’s a very, very important goal for us.”

If you CLICK HERE you can see a video of the Genie in action. It will be available in the US next year.

If you want some diversity in the fruits you eat we’ve got you covered there too. Science Alert tells the tale of a tree that produces forty different types of fruit.

An art professor from Syracuse University in the US, Van Aken grew up on a family farm before pursuing a career as an artist, and has combined his knowledge of the two to develop his incredible Tree of 40 Fruit.

In 2008, Van Aken learned that an orchard at the New York State Agricultural Experiment Station was about to be shut down due to a lack of funding. This single orchard grew a great number of heirloom, antique, and native varieties of stone fruit, and some of these were 150 to 200 years old. To lose this orchard would render many of these rare and old varieties of fruit extinct, so to preserve them, Van Aken bought the orchard, and spent the following years figuring out how to graft parts of the trees onto a single fruit tree.

Working with a pool of over 250 varieties of stone fruit, Van Aken developed a timeline of when each of them blossom in relationship to each other and started grafting a few onto a working tree’s root structure. Once the working tree was about two years old, Van Aken used a technique called chip grafting to add more varieties on as separate branches. This technique involves taking a sliver off a fruit tree that includes the bud, and inserting that into an incision in the working tree. It’s then taped into place, and left to sit and heal over winter. If all goes well, the branch will be pruned back to encourage it to grow as a normal branch on the working tree.

After about five years and several grafted branches, Van Aken’s first Tree of 40 Fruit was complete.

Aken’s Tree of 40 Fruit looks like a normal tree for most of the year, but in spring it reveals a stunning patchwork of pink, white, red and purple blossoms, which turn into an array of plums, peaches, apricots, nectarines, cherries and almonds during the summer months, all of which are rare and unique varieties.

Not only is it a beautiful specimen, but it’s also helping to preserve the diversity of the world’s stone fruit. Stone fruits are selected for commercial growing based first and foremost on how long they keep, then how large they grow, then how they look, and lastly how they taste. This means that there are thousands of stone fruit varieties in the world, but only a very select few are considered commercially viable, even if they aren’t the best tasting, or most nutritious ones.

Van Aken has grown 16 Trees of 40 Fruit so far, and they’ve been planted in museums, community centres, and private art collections around the US. He now plans to grow a small orchard of these trees in a city setting.

Of course, the obvious question that remains is what happens to all the fruit that gets harvested from these trees? Van Aken told Lauren Salkeld at Epicurious:

“I’ve been told by people that have [a tree] at their home that it provides the perfect amount and perfect variety of fruit. So rather than having one variety that produces more than you know what to do with, it provides good amounts of each of the 40 varieties. Since all of these fruit ripen at different times, from July through October, you also aren’t inundated.”

This is the tree. 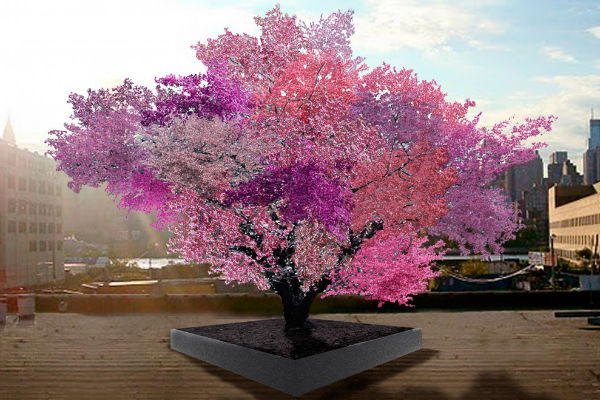 I THINK that I shall never see
A poem lovely as a tree.

A tree whose hungry mouth is prest
Against the sweet earth’s flowing breast;

A tree that looks at God all day, 5
And lifts her leafy arms to pray;

A tree that may in summer wear
A nest of robins in her hair;

Upon whose bosom snow has lain;
Who intimately lives with rain.

Poems are made by fools like me,
But only God can make a tree.

While true in the sense that Van Aken didn’t make the tree it’s still pretty cool to see it in action. Hopefully they’ll be able to streamline the process and make it more readily available to the masses. Until then it’s heartening to know it exists.

One thing I discovered on my diet is that you can eat a lot of different things. You’d actually be amazed at the number of healthy choices you can make without going hungry. In fact I’d have to say that my diet now is far more diverse than the one that almost killed me.

Oh, side note, had I not gone on the prescribed diet I would have died within a couple of months. No way I knew that looking in a mirror.