You are here: Home / U NO B STOOPID

Stupid is as stupid does, goes the modern aphorism. Or, as Ron White famously put it, you can’t fix stupid. But, God help me, I am going to try. Let’s get some of the obvious ones out of the way. There are no Nigerian princes, or princesses, hanging on to a couple of mil that they just need to deposit in your bank account. Quit encouraging them. Also, bonus, if you do fall for that scam you can go to jail for money laundering, among other crimes. So, yes, it is now a crime to be stupid. Let’s see, what else? Oh yeah, you need money. We all do. That said, going to an online loan site and turning over your banking info and social security number makes you an idiot. The same crimes apply as for the Nigerian money scam so you and your loved ones may not see each other for a while. Additionally, if you get an email from a bank you don’t use or have never heard of, just delete it. Save yourself years of hassle. Russian brides? I actually know a guy who went for that one. $100,000 and three years of court filings later he was allowed to give her half of his money and property. On the one hand that may have been a cheap price to pay to get rid of the bitch but, on the other, this was pretty avoidable. Kind of like, if the gates are down or the lights are flashing, don’t go on the train tracks. This stuff is easy if you take a minute to think first.

SplashData, which makes password management applications, has released its annual list of the 25 worst passwords based on files containing over 3.3. million passwords leaked in 2014.

“123456” and “password” hold the top two spots, as they have every year since the company started producing this round-up in 2011. New passwords appearing on this year’s edition include “696969” and “batman.”

Cyber-security experts often say that the harder the password is for you to remember, the more secure it is. If your password is on this list, consider this smart and easy tip TIME recently received from security expert Bruce Schneier:

Come up with an entire phrase that’s easy for you to remember, and then use the first instance of each letter, number and symbol from each word in the phrase, keeping punctuation intact as well.

By the way, #19 is most popular with women who like 50 Shades of Grey. You might want to talk to your mom about safe cyber practices. That will be a fun conversation, I can promise you that.

“Mom, we need to talk. I know you’ve been having unprotected encounters.”
“Oh, honey, dad and I stopped doing that stuff years ago.”
“Mom, no, ewwww…..”

See? I promised you fun.

In other news, quit being an asshole and vaccinate your kids. Even Fox News, which has a habit of finding experts who actually don’t have a freaking clue what they’re talking about, actually broke down and asked real doctors about the risks involved with vaccination. The unanimous result was that parents should vaccinate their kids. And, if they won’t, then the government should do it for them.

Measles and whooping cough, two diseases that were almost completely eradicated 20 years ago, are now infecting people and claiming lives at an astonishing rate. In 2012 over 48,000 kids, in California alone, came down with whooping cough and some of them are died.

The reason that Fox’ guest doctors advocated government intervention is that none of these kids needed to get sick; and wouldn’t have if they were properly vaccinated.

I’ll make it simple for you.

THERE IS NO FUCKING LINK BETWEEN VACCINES AND AUTISM!!!!

Justine Alford, over at I Fucking Love Science, says that the Gates Foundation is using art to hammer home the concept.

photo credit: Alexia Sinclair, via The Art of Saving a Life

On May 14, 1796, Edward Jenner performed a now famous medical experiment on an 8-year-old boy named James Phipps. He was testing out his theory that people who had been infected with the mild disease cowpox could not contract smallpox, one of the deadliest diseases in human history. To do this, he cut the boy’s skin and inserted the pus from a cowpox sore. A few days later, he challenged Phipps with smallpox, but he never succumbed. Phipps had become immune to the disease.

This experiment marked the first important step towards the global eradication of smallpox, which was officially achieved almost 200 years later, and is represented in the image above. (If you’re wondering where the beautiful woman fits in, she is highlighting the fact that the disease does not discriminate between the rich and the poor).

The thought-provoking piece, which was shot by Australian photographer Alexia Sinclair, is part of a wider collection of art by more than 30 world-renowned photographers, painters, sculptors, writers, filmmakers and musicians. The idea behind it is to share with us the stories behind the success of vaccination, which are stories of “risk and bravery, the passion and dedication of scientists, the love of parents, and the determination of health workers.”  Of course, there is a wider message that the artists hope to convey: vaccinations save lives, and they’ve helped change the world for good.

The compilation is called The Art of Saving a Life, and it will be unveiled throughout January in order to promote the importance of vaccination during the run up to a huge fundraising meeting at the end of the month. The event, which will be held on January 27th, is organized by Gavi, a global vaccine alliance, who are seeking $7.5 billion over the next five years to deliver vaccines to 300 million children. If they are successful, they believe 6 million lives could be saved.

Here is a sample of the evocative work, which we can thank the Gates Foundation for as this philanthropic organization commissioned the work: 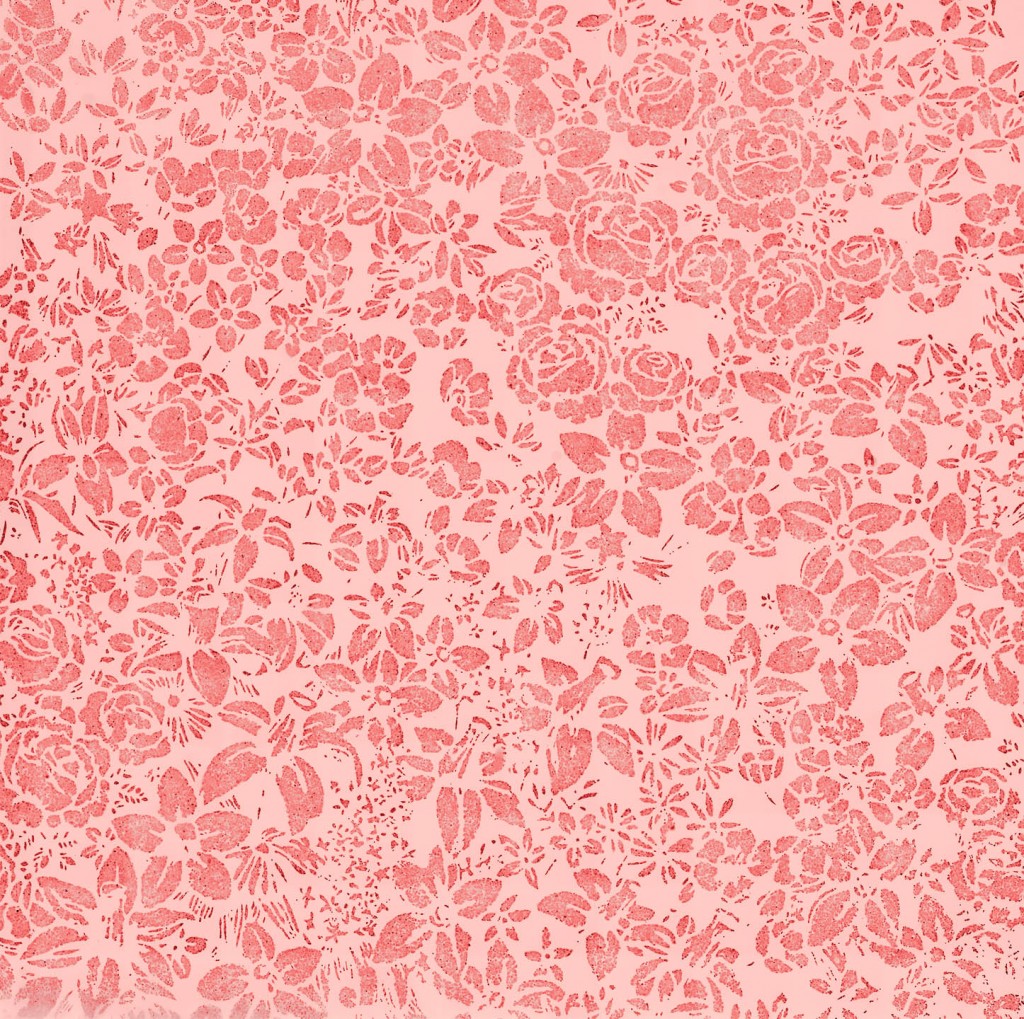 While this may look a bit like wallpaper, the image was actually created using cells. As Muniz explains: “The artwork is a microscopic pattern of liver cells infected with a smallpox vaccine virus. After infection, the virus turns the cells a reddish color which allows scientists to visualize infection.” 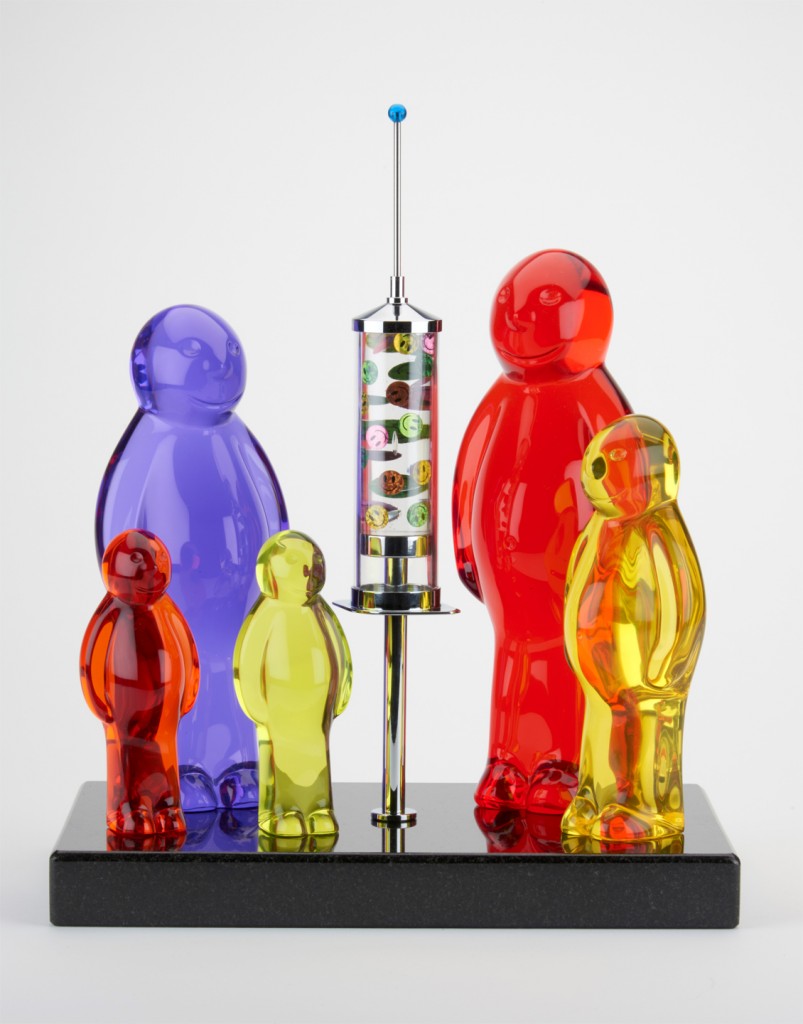 Using pigmented resin, Perucchetti has combined two of his most famous sculptres: Jelly Baby Family and Love Serum, which could “inoculate the whole world.” The idea is to bring a smile to children and remove both the fear of needles and parents’ skepticism of their effectiveness.

The Girl Who Kicked the Ball—Rakeysh Omprakash Mehra

This digital animation is “a metaphorical portrayal of the poliovirus as aliens and the human spirit that defeated it by creating the anti-virus in a ‘vaccine.’” Mehra hopes that the film portrays the power of immunization and shows us a brighter future if we take a stand against disease.

By the way, Edward Jenner, mentioned above, got the idea by watching milk maids. They would get the mild disease of cow pox and never suffer any further ills. So, basically, some dirty old man ogling women is responsible for saving billions of lives.