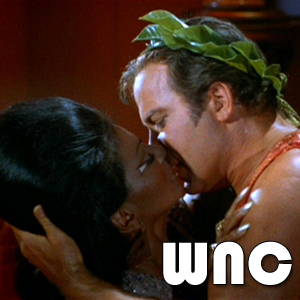 Today is Martin Luther King, Jr. Day. Fox News will celebrate by pronouncing racism dead and telling everyone to move along as there’s nothing to see there. Most everyone else will recite his “I Have A Dream” speech while completely missing the point. A few of you will remember his Drum Major speech and be reminded how grounded he was. But, all that aside, Dr. King had a profound effect on our culture that you may not be aware of. If it wasn’t for him Star Trek would probably be an answer in Trivial Pursuit and not much more. I originally wrote this on February 11, 2012 but today seemed like a good time to dust it off and share it again as it’s a fascinating look at a piece of our history. In the land of unintended consequences, this is a good one.

You read the title (orig: Thanking Dr. King for Star Trek) and figured, “Okay, this is it. The big dude has finally lost it.” Everyone knows that Dr. King had a dream and not a star ship. Well, “everyone” knows lots of crap that’s wrong. Although it is true that Dr. King did not actually have a star ship, he did have a dream that powered one. And that dream led to the unlikely event of television’s first ever interracial kiss. Think of it in the pinball reality of how the water wheel powered loom led directly to computers. Which is true. As is the title of today’s blog. You see, once upon a time in a movie lot far far away, Lucille Ball and her husband Desi Arnez, via their company DesiLu Studios, bought the rights to a TV show that was going to be called “Wagon Train to the Stars.” While they were trying to come up with a better name they recorded the pilot episode. It was called “The Cage” and it was rejected for being too ethereal. But, and this is where history starts to rock, there was enough good stuff there that DesiLu ordered a second pilot. That one was called “Where No Man Has Gone Before” and it aired on September 8, 1966. And thus was Star Trek born.

Star Trek featured people from several races that had never appeared on TV in strong roles before. The Chinese guy wasn’t a cook, the Russian didn’t make hats and swill vodka, the black woman wasn’t a maid and so on. But, because this was America in the early 60’s, racism was overt and cruel. And now I’m going to let Nichelle Nichols tell you why she almost quit going to work because of the diseased jerks who taunted her and how Dr. King saved Star Trek and led to her locking lips with Captain Kirk.

When television writer and producer Gene Roddenberry’s “Star Trek” science fiction series debuted on NBC in 1966, the Civil Rights Movement — under the leadership of Dr. Martin Luther King, Jr. — was in high gear, fighting the injustices of racial segregation, black economic oppression and discrimination and racial violence against African Americans.

And when Nichols landed the role of communications officer Uhura on the Starship Enterprise (see dual image below of her then and now), she had no idea that this was a breakthrough role for black women.

“It didn’t hit me at the time until somebody told me,” she told The Huffington Post. “I splashed onto the TV screen at a propitious historical moment. Black people were marching all over the South. Dr. King was leading people to freedom, and here I was, in the 23rd century, fourth in command of the Enterprise.”

“Oh, man, there were parts of the South that wouldn’t show ‘Star Trek’ because this was an African American woman in a powerful position, and she wasn’t a maid or tap dancer.”

While shooting “Star Trek” episodes in the late 1960s, Nichols didn’t feel any discrimination on the set, but felt it in other parts of the studio, especially where she wasn’t allowed to enter the studio through a particular gate where the other actors could go through.

“That’s right. There were instances where I was turned away from entering the studio at the walk-on gate, and I had to go all the way around to the front gate, sign-in and come back. A guard on the set told me I had no right being there — that they had replaced a blue-eyed blonde with me,” she remembered.

“I went through crap, man. Racism was alive and rampant there. Some people said I wasn’t good enough, saying things like, ‘I don’t know how you got this role.’ And they kept waiting for me to complain and raise hell about it, but I decided to ignore it. I never went to Gene [Roddenberry] about it.”

She even said that the show photographer was a racist. “There are more pictures of me behind somebody where you can barely see me, but they also had to take pictures of me singularly.”

Unhappy with how things were going with the show, and feeling tugged to hit the Broadway stage in New York, Nichols told Roddenberry she was leaving “Star Trek” at the end of the first season. He asked her to think about it over the weekend, during which she attended a National Association for the Advancement of Colored People fundraiser that resulted in a life-changing close encounter for her.

“When I turned around, I was looking into the face of Dr. Martin Luther King, walking toward me with a big smile on his face,” she said about the civil rights leader, who confessed to being a “Trekkie” and her biggest fan.

When Nichols informed King that she was leaving “Star Trek,” he adamantly urged her to stay. “He said, ‘Don’t you realize how important your presence, your character is? This is not a black role or a female role. You have the first nonstereotypical role on television. You have broken ground.'”

“He added, ‘Here we are marching, and there you are projecting where we’re going. You cannot leave [the show]. Don’t you understand what you mean?’ I told him that when I would go on hiatus from the show, I could come and march with him and he said, ‘No! You’re an image for us. We look on that screen and we know where we’re going.’ It was like he was saying, ‘Free at last, free at last!'”

Nichols stayed with “Star Trek,” and it’s a good thing she did — otherwise she may not have had a chance to make history again by being part of the very first televised interracial kiss, with Capt. Kirk, no less.

It happened during “Trek’s” third season in an episode called “Plato’s Stepchildren,” where Kirk and Uhura were under the telekinetic control of some aliens.

While the script called for Kirk and Uhura to kiss, there were early concerns at NBC over whether or not such a thing should be shown on television in 1968.

“It had been OK’ed, script-wise, and we went into production for that episode,” Nichols recalled. “After the first take, the director yelled ‘CUT!’ and came over, saying, ‘Bill, what are you doing? You actually kissed her!’ And Bill said, ‘Yeah, I can’t get her to let me do it any other way except that it was written in the script. So, what’s the problem?’ And the director said, ‘The South — they’ll kill us.'”

After it was decided that Nichols and Shatner would shoot the kissing scene two ways — with and without the kiss — they tried it half a dozen times, with Shatner always kissing Nichols at the end of the scene.

“Bill would say, ‘Just once more. I feel there’s an intensity that we’re not getting because (the aliens) are causing us to do it with their telekinetic powers.'”

In the end, NBC executives decided to leave it in the episode, and thus was born the famous first interracial kiss on television.

That kiss has become one of the most famous moments in television history. Even more than Uncle Milty’s early drag act. I know guys who still need to take a personal lube moment when they think about it. Star Trek truly captured the possibility of racial harmony and unity in that moment.

No, the world did not change overnight. It still hasn’t changed as much as rational people would like now. But it did change. Incrementally I admit. But suddenly people were talking about something that was, previously, relegated to tawdry barn stories or stuff the French tolerated.

It could happen here. Everyone knew that because they’d seen it on TV.

And, for one brief, shining, moment, everyone was right.