You are here: Home / Thank God No One Overreacted!

Florida is a strange state. You know that, I know that, people with double digit IQs know it, yet Floridians themselves seem blissfully unaware of that fact. This is the state that encouraged people to hunt pythons with hand guns. Which is just as effective as hunting elephants with pebbles. Fortunately no one was killed. Why is there a python problem in Florida? Because they hold cockroach eating contests so poor people can own them too until the poor people realize they can’t afford the upkeep pythons require and end up setting them loose in the swamps. Where they kill lots of stuff because they’re hungry and they can. Then again this is the fun state that took four tries to outlaw bestiality and then promptly got sued by a citizen who argues, still, that denying him sheep sex infringes on his personal rights. I could go on and on but you get the idea. Clearly infringing on people’s rights is a no-no in Florida.

Thanks to the Stand Your Ground law killing people can be considered a hobby. But, if you’re a gassy kid you’re going to the big house.

No, I’m not kidding.

Schools have always had their fair share of “problem children”, but we used to actually be able to cope with them in a reasonable and sensible manner.  Not so any more.   A scan of headlines across America for just this past week showed me some bizarre and horrifying examples of how we in North America are doing our best to instill an abiding sense of fear and terror of police into our children.

For example, the case of a 12-year-old student at Stuart’s Spectrum Jr./Sr. High School was arrested for farting in class.  Sure, the little puke was being disruptive.  He’s a 12-year-old boy for crying out loud!  He’s supposed to be disruptive at that age.  It’s in his DNA. 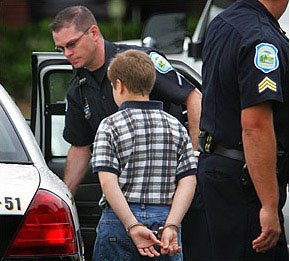 You kick him out of class until he settles down… maybe even send him home after a phone call to his parents, but to bring in the police and arrest the kid? Put him in handcuffs and parade him out like a terrorist?

That is so far beyond absurd I don’t even know what to call it.  Clearly police from the Martin County Sheriff’s Department need to get a life, or at the very least go find some actual criminals to harass.

If they’ve got the time to arrest 12-year-old farting boys, then perhaps Martin County doesn’t need a Sheriff’s Department at all.

I’m sure the intended lesson won’t be lost on this young man… “Obey or else.”

These police officers ought to be, at the very least, ashamed of themselves.  They would appear to have missed out on even the most meager portion of common sense.

The next case of gross police absurdity comes from Midway, Georgia, where police found it necessary to shut down a lemonade stand run by a couple of kids.

Believe it or not, Midway Police Chief Kelly Morningstar said, according toFox News, that “police didn’t know how the lemonade was made, who made it or what was in it.”

Now I’m no cop, but I’m willing to bet you that I could find out the answers to those questions inside of 60 seconds and have lots of room to spare, if I felt the need to grill these kids in the first place, which I don’t. 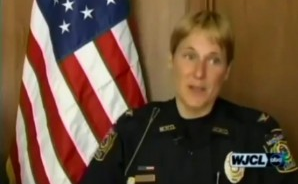 According to the good Chief Morningstar, the kids needed to have a business license, a peddler’s permit and a food permit before operating their lemonade stand would be legal.  That would only cost a total of $230.

They were trying to raise some money for a trip to a water park. How many lemonade stands do you know that are pulling in that kind of cash?

Citing “the law’s the law,” Morningstar was quoted as saying.  Well Chief Morningstar… in this case, the law is an ass, as is your enforcement of it.

Last on my list of asinine police actions is the case of a 16-year-old student and cheerleader who was arrested for “stealing” her cheerleader’s uniform.

Have we no bloody common sense any more?

Well, there is some.  It comes from the attorney for the young woman, Terence Kindlon.

“I’ve been practicing law for over 35 years now, and I have to say without hesitation this is the most absurd criminal prosecution I’ve ever seen.”

The student from New Lebanon High School was arrested because her cheerleading coach said she stole her own uniform.

Wow.  She won’t give back the uniform?  Fine.  Charge her for it and make her pay for the lost items if she wants to keep them so badly.  Who cares?

Penny Black, the cheerleading coach in question, doesn’t have an issue with this sort of stupidity.

Deputy Shufelt met with Amber and her mother before a criminal complaint was signed in an effort to reconcile the situation, according to the Sheriff’s Office, but Amber “repeatedly” refused to return the uniform.

“The owner then requested criminal charges be filed and after consulting with the Columbia County District Attorney’s Office, the defendant was charged with petty larceny,” said the Sheriff’s Office report.

Amber was asked to turn herself in and be issued an appearance ticket, according to the report, but she refused that request. Deputy Shufelt got a warrant for her arrest and Amber was picked up at her job here.

Arresting a cheerleader for “stealing” her uniform is just about the most asinine thing I’ve ever heard of.

Except, of course, arresting a kid for farting, or shutting down a kid’s lemonade stand because she doesn’t have a business license for it.

I must be old-fashioned or something, because none of this makes any sense to me.

To recap, killing strangers is good. Farting, selling lemonade or being a cheerleader is bad.

Oh, and eating cockroaches is fun too. Well, except for the giant mutant ones they let loose that have no natural predators.

I seriously wonder if David Lynch runs that state.

The last two examples, from Georgia and rural NY are also fun in a “gee, can you learn to pretend to be a human” sort of way. I say this as someone who walked into an Aryan Front bar in New York once. Stupid is everywhere folks. Remain vigilant.

Ebony in Pink from Adult Image on Vimeo.