You are here: Home / Our Little Princesses
People stand, gape mouthed, at the passage of time. They act as though change must never happen. I was reminded again of this trait when I heard that the Billy Goat Tavern might be forced to move. Again. It has moved three times since it originally opened in 1934. The outrage over each move eventually died. Pretty much as soon as the doors opened on the new place. Such will it be again. And, let us not forget, far from the bastion of burger purity immortalized by John Belushi, this is now just another chain pushing fatty food. And beer. You can now buy a Cheezboogah in Washington D.C. And have it historically mispronounced by a highly paid professional. You also still can’t get fries there because, as Ed Debevic’s proved, people are stupid and like to be abused. It is also the same reason people bought 50 Shades of Grey. No, I will not link to that crap.

Anyway, Zoë Triska is fun writer who, today, admits that she is a thief and likes ruining people’s childhoods.

When I was a kid, I loved fairy tales. I loved the idea of talking animals and brave girls and boys who overcame cruel care takers. I also really loved Disney movies. They all had happy endings; what’s not to love about that? I could watch “Beauty and the Beast” or “Aladdin” every single day.

When I got a little older, I graduated from watching Disney movies to reading the Brothers Grimm. In the fourth grade, I checked out the “Complete Fairy Tales of the Brothers’ Grimm” from my school library and never returned it (a belated “sorry!” to my grade school library!)

I was horrified to find that the origins of many of my favorite Disney movies had much more gruesome details that Disney completely left out.

Below is a collection of horrifying details that Disney chose to leave out of all of these book/fairy tale/play adaptations. Read on only if you want to completely ruin your childhood.

“Cinderella”: In the Brothers Grimm version, one of Cinderella’s evil stepsisters cuts off her toes, and the other her heel so they can both fit into the tiny glass slipper. The prince is notified by little doves that there is blood on the shoe, and finally discovers that the true owner is Cinderella. Once the stepsisters realize that they should try to win favor with Cinderella (after all, she will be queen), they attend her wedding, only to have their eyes pecked out by birds. Did they deserve it? I’ll let you decide, reader.

SOME OTHER SIDENOTES ON THIS STORY: Cinderella doesn’t have a fairy godmother. Rather, she plants a tree by her mother’s grave and prays under it every day. She finds her dresses to wear to each ball under the tree (there are three in the story, not one like in the movie). She is still helped by animals, though specifically birds, not mice. Also, she doesn’t just lose her shoe because she is in a rush. The clever prince covers the steps in pitch to make her stick to them, but she only loses a shoe in the process.

“The Little Mermaid”: Hans Christian Andersen’s classic tale is a 180 from the Disney film. Some parts align. She does see the prince from afar in his ship, and she does rescue him from drowning and fall in love with him. He doesn’t see her. She does visit the sea witch who takes her tongue in exchange for legs (and she does do it because the little mermaid has an amazing voice).

The deal is the same: The mermaid can only remain a human if she finds true love’s kiss and the prince falls in love with and marries her. However, the penalty in the movie is only that Ariel will turn back into a mermaid if she fails. In the story, she will DIE if she fails. Also, while the prince remains a main motivator, the mermaid in the story is also motivated because humans have eternal souls, and mermaids don’t. The Disney movie leaves out that the penalty the mermaid pays for having legs: every single step she takes will feel like she is walking on sharp shards of glass. At first, it seems like the plan is working, but then the prince ends up marrying another, a woman he THINKS is the person who saved him (the mermaid can’t exactly tell him the truth, since she can’t talk). She is told that if she KILLS the prince, then she can simply turn back into a mermaid and doesn’t have to die. She just can’t do it, though. She throws herself into the sea, and turns into sea foam. How’s that for a happy ending?

“The Fox and the Hound”: The Fox and the Hound is based on a 1967 novel written by Daniel P. Mannix. In the book, the fox is raised by the dog owner’s/hunter’s family, but eventually returns to the wild. He occasionally returns to taunt the dogs, and flash his cunning fox skills. One of the dogs breaks his chain, and chases him. That dog ends up getting hit by a train. The hunter is devastated, and vows revenge on the fox. He becomes obsessed, but can never catch him (although he does kill the fox’s first mate, second mate, and children). Eventually, Tod the fox DOES die, but of exhaustion from being chased so much. Copper (the dog from “The Fox and the Hound”) is so old that he needs to be shot, and that is the end of the book. Pretty different from the movie, where a puppy and a baby fox become BFFL.

“Beauty and the Beast”: Beauty and the Beast is actually pretty accurate, except for some uninteresting details (like how Belle’s father used to be rich, but got himself into major debt). There is ONE unfortunate detail that the story DOES leave out. In the first believed version of the tale (by Gabrielle-Suzanne Barbot de Villeneuve), Belle has two wicked sisters (lots of wicked family members in fairy tales, unfortunately). The Beast allows Belle to travel home, as long as she is only gone for a week. Her sisters are extremely jealous to hear about her luxurious life, and try to persuade Belle to stay with them longer than a week, in the hopes that the Beast will be infuriated with Belle and eat her alive upon her return. Yikes.

“Pinocchio”: Disney’s “Pinocchio” came from Carlo Collodi’s 1883 Italian classic “The Adventures of Pinocchio.” You might think Pinocchio was mischievous in the movie, but he is far more so in the book. In the book, he runs away as soon as he learns to walk. He is found by the police, who imprison Geppetto because they believe Pinocchio was abused. Pinocchio returns home, where he kills a talking cricket (sorry, Jiminy) who warns him of the dangers of hedonistic pleasures and obedience. Geppetto is released, and insists that Pinocchio goes to school. Pinocchio sells his school books for a ticket to the Great Marionette Theatre. He encounters a fox and a cat, who steal his money and unsuccessfully try to hang him. Luckily, after saving Geppetto from the terrible dogfish (you might know it better as the gigantic, angry whale from the film), Pinocchio shapes up and eventually becomes a real boy (and, you know, all that stuff about boys getting turned into donkeys and then sold to evil circuses did end up making it into the movie, surprisingly).

“Sleeping Beauty”: In Giambattista Basile’s tale (which is the actual origin of the Sleeping Beauty story), a king happens to walk by Sleeping Beauty’s castle and knock on the door. When no one answers, he climbs up a ladder through a window. He finds the princess, and calls to her, but as she is unconscious, she does not wake up. Well, dear reader, he carries her to the bed and rapes her. Then he just leaves. She awakens after she gives birth because one of her twins sucks the flax (from the spindle) out of her finger. The king comes back, and despite him having raped her, they end up falling in love? However, another big problem: the king is still married to someone else. His wife finds out and not only tries to have the twins killed, cooked, and fed to the king, but also tries to burn the princess at the stake. Luckily, she is unsuccessful. The king and the princess get married and live happily ever after (despite the fact that he raped her). Perrault’s adaptation of Basile’s updated adaptation of the story (a much tamer version) is probably what was used for the Disney adaptation, as they are much more similar.

“Tangled”: I know, this is a pretty loose adaptation. But still, I think it’s worth mentioning. In the Brothers Grimm version, Rapunzel gets knocked up by the prince before they escape, and the evil sorceress figures it out. The sorceress cuts off Rapunzel’s hair and throws her out into the wilderness. When the prince shows up to see her, the sorceress dangles Rapunzel’s cut-off hair to lure him, and tells him he will never see Rapunzel again. He jumps out the window in despair and is blinded from the thorns below. He wanders around aimlessly (he is blind). Rapunzel gives birth to twins. He is eventually guided back to her when he hears her voice. Her tears restore his sight. They return to the prince’s kingdom and live happily ever after. (See? Some of these fairy tales actually DO have real happy endings, even when women have babies out of wedlock!)

“Snow White and the Seven Dwarfs”: In the Brothers Grimm version, the evil queen stepmother asks a hunter to take Snow White into the forest and kill her (this also happens in the Disney movie). However, in the story, she asks him to also bring her back Snow White’s heart and liver. He can’t kill Snow White, and so brings back a boar’s heart and liver as well. The queen eats the heart and liver, believing them to be Snow White’s. Yuck. In the book, the queen tries twice unsuccessfully to kill Snow White. The third time, when the queen gives her the apple (just like in the movie), Snow White faints and can’t be revived. She is placed in a glass coffin. A prince comes and wants to take her away (even though she is still asleep, which is pretty weird). The dwarves hesitantly allow it, and while she is being carried, the carriers trip, causing the poisoned apple to become dislodged from Snow White’s throat. She and the prince, of course, get married. The evil queen is invited. As a punishment, she is forced to wear burning-hot iron shoes and dance until she drops dead.

Well, that would have made a much more visually interesting ending in my book.

And it seems I’m not alone. Zenescope Entertainment is producing some heavily sexed up, hyper violent, versions of Grimm’s fairy Tales. I offer Little Red Riding Hood as example “A”. 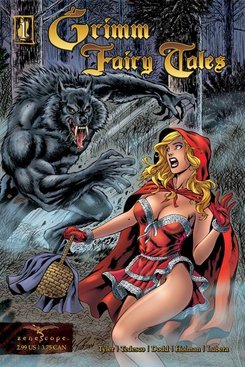 Yeah, you’re right, I’m a better person for knowing about this stuff and sharing it with you.

The point is that nothing remains the same. Not even the song. Change is what makes life vital. It’s what keeps us interested in the world around us. If everything was the same as it was whenever you imagine, we would have stagnated and become extinct.

In the meantime I give you a video that celebrates marriage equality.

I kid. I have no fucking idea what this thing’s about but it has a nice beach scene and a naked woman wrapped in ropes. That’s all you need sometimes.