You are here: Home / Gone Hunting
The level of stupid oozing up out of the sewers of America is starting to get frightening. A mom in Virginia dressed her 7 year old kid up as a Klansman. Why? Because it’s a family tradition. Mom even tossed out this little bon mot; “It’s supposed to be white with white, black with black, man with woman and all of that. That’s what the KKK stands for.” Well, yeah, that and a race war that they hope will eliminate non whites from the planet. It doesn’t get any more “family values” than that. I guess I shouldn’t be surprised. Just the week before Halloween I wrote about several examples of blatant racism. At the time I said I found it oddly heartening that we were forcing the xenophobes and haters into the light. I still do feel that way as I believe it will be best for the world in the long run. But it does get wearing after a while. Anyway, thanks to laws and things that annoy these folks the Klan can no longer hunt black people. That, however, does not prevent stupid people from owning guns.

And the level of stupid I’m about to introduce you to is staggering. 3 people in Oklahoma were arrested after a Big Foot hunt went wrong. Go ahead and read that again before you move on.

Three people in Oklahoma were arrested over a bogus Sasquatch hunt that authorities say wasted their time and put a man in the hospital with a nasty gunshot wound.

Omar Pineda, 21, was arrested after he told Rogers County deputies that he shot his friend in the back when a “barking noise” spooked him during a hunt for Bigfoot late Saturday night.

“If [they] had just been factual, upfront and truthful with us and explained that this was truly an accident, as strange as it might sound, we would have went ahead and investigated and probably nobody would have [gone] to jail,” Rogers County Sheriff Scott Walton told News On 6. “[But]… when you start off with an explanation like that, [how] do you believe anything after that?”

According to KFOR, the bullet entered the victim’s back and went through his stomach. He underwent surgery at an area hospital and is expected to survive.

Pineda’s father-in-law, Perry Don James, 53, was also arrested in connection with the so-called “Bigfoot hunt.” Police said that James, who is a convicted felon, threw a gun in a pond, which police dive teams then had to recover. He is charged with felon in possession of a firearm and destruction of evidence.

Oklahoma is not known as a hotspot for Bigfoot sightings in the U.S., although more than a few encounters have been reported there over the years.

I know people hate science because of its insistent reliance on facts and stuff, but I am going to have to insist that facts be kept in play here. I have pointed out several times why Bigfoot can’t exist.That does not mean there aren’t wonders in the world, that same link will introduce you to one, just that you don’t get to use made up creatures to commit attempted murder.

Not even in Oklahoma.

In keeping with the fun world we live in, people are now reporting military and commercial drones as UFOs.

There was once a time when UFO sightings turned out to be easily identified objects like weather balloons, lenticular clouds, satellites, meteorites, planets, conventional aircraft, weather anomalies and other normal things.

Now, here come the drones, the newest addition to the growing list of misidentified things in the sky that many people claim are ships from another part of our galaxy. (Watch the HuffPost Live video above) 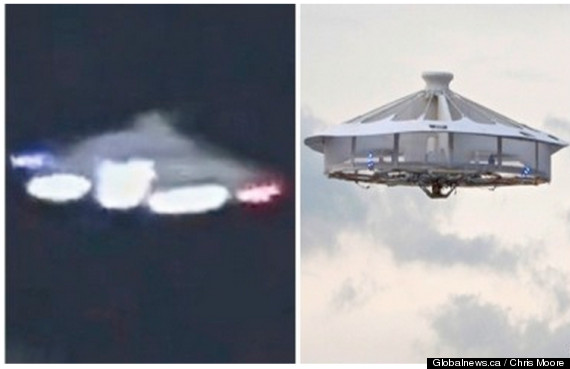 From a “flying saucer” drone created by a Canadian science center to deliberately fool people at a baseball game (see image above), to a news agency’s hovering, camera-mounted craft observing a large crowd of protestors in Moscow, drone technology is used for military purposes as well as consumerism trickery.

Yes, that’s right, it’s easier to believe in beings from Alpha Venturi swinging through our atmosphere than it is to believe we are looking at something made in Alabama. Which is the fun state where you can have a minimum wage job making million dollar drones.

Now, how do we tie all of this together?

Lee Spiegal reports that the Kardashians, heroes of all things base or ignorant, went on a UFO hunt.

Part of keeping up with America’s most watched reality TV family, the Kardashians, means we now know that several members of the family have a strong belief in UFOs and aliens.

On Sunday’s episode of the E! channel’s long-running “Keeping Up With The Kardashians,” the Kardashian/Jenner family set out on a trip to hunt for aliens at America’s top secret — and legendary — military base, known as Area 51.

Back in March, OpenMinds.tv reported how Kendall Jenner had revealed her own UFO sighting, followed by her sister Khloe Kardashian’s disclosure of her belief in UFOs.

At the same time, the CIA revealed that Area 51 actually existed in the Nevada desert where, for decades, America built and tested high altitude spy aircraft technology. It also bred decades of rumors and speculation that the CIA was researching alleged alien technology at Area 51.

Put it all together and this is where the Kardashians wanted to go.

They recruited Open Minds writer, radio host and HuffPost blogger Alejandro Rojas to guide them as close as possible to the fabled military base which continues to depend on very tight security to keep civilians away — even those named Kardashian.

Ah yes, the most secret place on earth that everyone’s known about for decades and that has it’s own Wikipedia page. They don’t let civilians on the base because that’s where the new technology that keeps America safe is developed and they’d rather not see it previewed on national TV by Kendall Jenner and her unctuous ilk.

Stupid is what it is but these people are willfully ignorant. They revel in their avoidance of facts.

Sadly, according to three lawyers I checked with, we cannot beat these people with hammers. So I guess we’ll just have to keep hammering home the truth.

Bounce My Bitch Up – Moduloktopus & Madd Martigann (The Prodigy) from Michael Gold on Vimeo.