You are here: Home / Fun with the Shut Down
First, a letter. Well, an email, but you know what I mean.

My wife and I’ve been listening to you and Brian for about a year. You’ve found funny things in odd places but not even you can find anything funny about the shut down.

Actually, it’s Ryan. Not that he’d care, I just feel that we should always strive for honesty in our conversations. Anyway, ye of little faith, I can get laughs out of the Old Testament.

Q: Where in the Bible is baseball mentioned?
A: In the book of Genesis: it starts “In the Big Inning ….”

Christopher Harress notes that the shut down isn’t just affecting Americans. No, really, there are these people on this planet, walking around and breathing our air, who are not Americans. It may seem impossible, but it’s true. You’ll just have to trust me on this.

As the partial U.S. government shutdown enters its second week, there seems to be little progress from either the Republicans or the Democrats to end the crippling standoff. After hundreds of thousands of federal workers were sent home, America started to feel the ripple effects, ranging from concerns by federal workers about meeting their financial obligations to local businesses in and around Washington, D.C., losing income.

1. Some European cemeteries are shut.

The United States has 20 cemeteries in Europe that hold the remains of about 125,000 fallen soldiers, mostly from the two world wars. The cemeteries that are paid for by the federal government will now remain closed until an agreement can be reached.

2. Some banks are trying their best to help.

Federal customers at TD bank received a surprise then the Canadian bank announced that it would give federal employees a $1,000 overdraft facility for free. But after Nov. 2, the recipients must pay it back or face the usual fees.

Soldiers at Fort Campbell, Ky., reported seeing people stacking up on meat products because the store would not be stocking once they ran out. There is a Wal-Mart outside of the base, but the meat there is more expensive.

4. How will they keep the Canadians out?

Montana shares the second-longest U.S. border with Canada, after Alaska. The 545-mile stretch is now only manned by one person after the remaining people in Commissioner Kyle Hipsley’s Border Patrol team were furloughed. Similar situations exist all along the 5,525-mile border.

The Office of Foreign Assets Control has been depleted to the point that it is unable to continue enforcing the sanctions. “Note, our ability to do that, to enforce sanctions, to stop sanction evaders, is being hampered significantly by the shutdown,” the agency’s head told the Senate Foreign Relations Committee on Thursday.

6. Any events in national parks are off.

The Grindstone 100 race that was due to go through the southern Appalachian mountains in West Virginia has had to be called off in what would have been its sixth and biggest year. The race has never been run in less than 17 hours.

Cafes and restaurants are offering federal workers free food. Many of the establishments are trying to get rid of leftover food and using up pre-ordered stock.

8. Some museums are actually benefiting.

Now that the Smithsonian is shut, federal workers with time on their hands have been visiting other Washington, D.C., institutions that normally don’t get so much traffic. The International Spy Museum has reported a 30 percent increase in visitors over the last week. The National Geographic Museum has experienced a spike, as have the Newseum, the National Building Museum and the Phillips Collection.

The National Institutes of Health has had to turn away cancer patients who volunteer themselves for trials of experimental drugs after other treatments have failed. The Maryland-based institute turned away 200 people in a week.

Satirical T-shirts making fun of the shutdown have been generating income for Raygun, a Des Moines, Iowa, T-shirt printer. Founder Mike Draper has sold a couple of hundred every day since the shutdown. Slogans include: “The shutdown 2013 – no productivity, no mercy” and “Furloughed, non-essential employee. Don’t ask me, it’s my day off.”

My guess is that most of you didn’t know that America operated cemeteries on foreign soil. And, let’s be honest, there’s a lot of whimsical and useful information in Christopher’s article. But coming here for whimsy is like going to a car wash for a bagel.

So let’s get to the important stuff. Kate Abbey-Lambertz reports that, as a woman who writes about women and government it was her obligation – nay, her patriotic duty – to try one of the free vibrators being given to government workers.

That ain’t no government cheese.

Vibrators.com is giving away as many as 200 sex toys daily to government employees during the shutdown. The promotion, which began last Friday, started slow, with 400 vibrators given away over the course of the weekend. On Monday, Vibrators.com turned up the speed, filling out orders of their daily stock of 200 toys before noon.

Tom Nardone is the president of PriveCo, which runs Vibrators.com and several other websites that sell items the more-easily embarrassed might not buy in public, much less find with ease: ShopInPrivate.com, for example, sells everything from hair remover to pubic wigs (really). The vibrators they’re giving away, Nardone said, are the same ones they usually include as a free gift with orders on their various sites. That means they’ve been thoroughly tested in the lab of PriveCo’s Troy, Mich. warehouse … and they’re also user-approved. 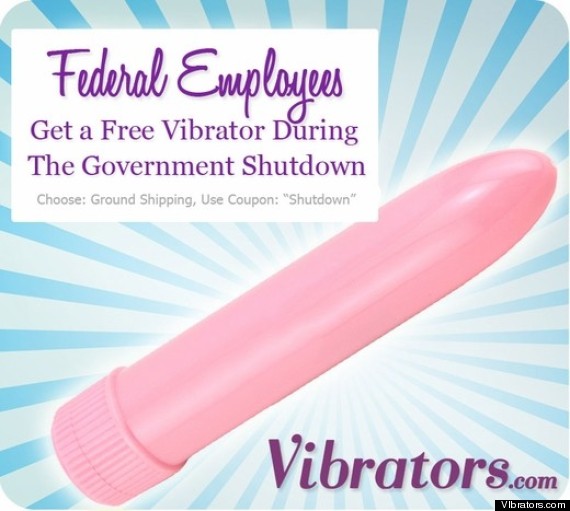 Nardone said they could continue offering the free vibrators to government employees even if the shutdown were to last through December.

The free offer doesn’t force people to verify that they’re furloughed government employees before ordering, though the site description attests “Karma will get” any non-gov employees who exploit the offer.

Nardone said that was in part because there was no way to do that without invading privacy, one of the biggest concerns for PriveCo (which doesn’t keep mailing lists and ships their items in discreet plain boxes). For a company that doesn’t market to past customers, Nardone said the promotion was a way to encourage some brand loyalty and show off the small company’s nicer side.

Originally, he said, they were brainstorming giveaways that would be funny at the expense of those causing the shutdown. The idea of free penis pumps for senators was tossed out, as was a half-off deal on enemas.

“We’re like no, that’s not what we do professionally. We’re not hateful people, we need to be helpful, like you tell your kids, ‘Is that hurtful or helpful?'” Nardone explained. “So we’re like, who’s really getting stiffed in this whole thing, you know. … The people who are really getting screwed out of the deal right now are the federal employees.”

Yes, you are well within your rights to make a Boehner joke here.

But, see? Nardone has the right attitude. The question everyone should ask before they do something stupid, like shut down the government, is “Who will benefit from my actions?”

If the answer is no one, and yourself doesn’t count, then don’t do it.

Well, Gary & Sheila, I feel we’re on a first name basis now, I hope you smiled.

Anyway, since we got the ladies, and some guys, all hot and bothered, we may as well finish them off.