You are here: Home / Gettin’ Jiggy With the Neighbors

It’s no secret that I maintain the position that just because alien life should exist doesn’t mean that it keeps bouncing of our planet so that it can keep anally probing farmers. The problem with every – ahem – theory ascribed to UFOs is that they don’t even pass a basic smell test when subjected to 3rd grade logic. That still doesn’t stop stupid people from draping themselves in darkly colored sheets of ignorance. That being said, some rational people have given some rational thought to the idea of finding our intergalactic neighbors. As I noted on June 3rd of last year, science has progressed enough that we can now discern if there is an advanced civilization on an alien world. We haven’t found any yet, but we know what to look for. At least in the general sense. For example, we can ignore the idea of trying to parse a conversation with an intelligent jellyfish. Even if such a creature existed it would have no limbs to build things, like a space ship. In other words, we are looking for creatures who can use tools. They would also need to be able to manipulate matter into energy to power said ships. Just those last two sentences give us more focus than we’ve ever had before.

I would even go so far as to say they would probably know how not to keep crashing into the same planet again and again.

Now a scientist named Geoff Marcy has come up with a way to use the Kepler data that is finding planets to see if there’s anything orbiting those worlds that isn’t natural. Like a satellite or a space ship.

The University of California at Berkeley astronomer is an official NASA investigator assigned to the Kepler mission and credited with confirming almost three-quarters of the first 100 exoplanets — planets outside our solar system — found by Kepler, as reported in Open Minds.TV.

Nearly 900 of these “new” planets have been detected since the 1990s, with information on more than 3,000 planet candidates being examined by scientists like Marcy.

Marcy, pictured below, is absolutely convinced Earth is part of a galactic neighborhood teeming with intelligent life. 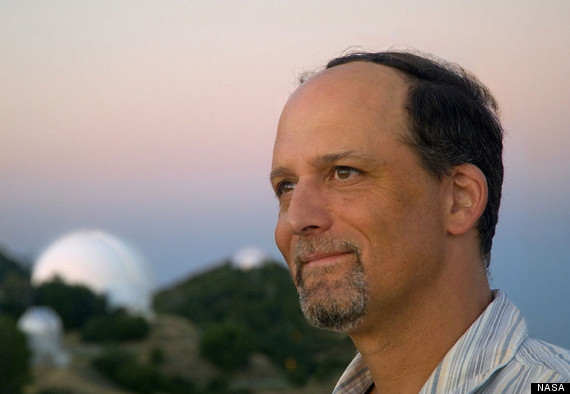 “The universe is simply too large for there not to be another intelligent civilization out there,” he told The Sydney Morning Herald.

“Really, the proper question is: ‘How far away is our nearest intelligent neighbor?’ They could be 10 light-years, 100 light-years, a million light-years or more. We have no idea.”

The Kepler spacecraft ran into a snag in May when two of its control wheels stopped operating. Kepler depends on this equipment in order to find temporary dips of light emanating from stars, which could indicate the passage of orbiting planets in the spacecraft’s line of sight, reports Discovery News.

But how does Marcy possibly hope to find evidence in the Kepler data that suggests an alien ship so far away in space, when it’s already difficult and time-consuming to just confirm new planets?

Marcy plans to apply the same methodology of sifting through the Kepler data — looking for the dimming of light from stars that’s caused by planets passing through the field of view — and suggests the same technique can be applied to looking for giant alien ships.

“I do know that if I saw a star that winked out, then at some point it winked back on again, then winked out for a long, long time and then blinked on again, that that would be so weird. Obviously that wouldn’t constitute the detection of an advanced civilization yet, but it would at least alert us that follow-up observations are warranted.”

Watch this 2011 video of astronomer Geoff Marcy discussing the huge number of planets discovered by the Kepler space telescope.

The grant will be used to pay a Berkeley student to create software to better study the Kepler data.

“Writing the computer code is not easy,” Marcy said. “There’s no prescription in any computer science book about how to search for aliens.”

The remaining grant funds will go toward giving Marcy a chance to use Hawaii’s Keck Observatory, where he’ll search for possible laser emissions from distant advanced civilizations — sort of an intergalactic alien laser Internet system.

There are many who think it’s not a good idea for earthlings to search the heavens for other life forms. In 2010, astrophysicist Stephen Hawking warned of the possible dangers of speaking to space aliens.

Marcy has a solution for the ongoing debate on whether humans should try and make contact with otherworldly beings.

“The first thing we do is transmit a message to them that says, ‘We taste bad.'”

The thing is that this, boring though it may seem, is how our universe will change. The odds of some little gray or green dude or dudine smacking head first into our blue ball are so staggeringly small as to be infinitesimal. But the odds of noticing electromagnetic activity that isn’t naturally created are well within logical expectations.

I imagine that we will begin discovering those signals within my lifetime.

Then we can truly watch the going get weird.

Digits – “Love is Only Affection” from Seth Mendelson