You are here: Home / Do We Really Need This?
The world has never needed an electric dog polisher. That hasn’t stopped someone from inventing one but my soul is heartened by the fact that it didn’t sell well. Although I am saddened that it sold at all. History is littered idea that should never have made it out of the bar. And you know that all of these ideas were hatched in bars. It is the only excuse for the brilliant children’s toy, Boner the Humping Dog. No, that’s not a typo. How about the beginner’s guide to Russian Roulette? You know, so you can get in a few practice rounds before you play with live rounds. Of course I would be remiss if I didn’t mention a dumb idea that could actually kill people, the Krummlauf, a fun machine gun that could shoot around corners. It was wildly inaccurate and kicked like a mule so any results that were close to what you wanted were entirely random events. You’d have had better luck throwing bullets at people. Naturally governments are still trying to make one that works.

All of the ideas above are bad, that’s easy enough to admit. However some ideas aren’t content to be just bad, and verily I doth warn you, they want to drag the soul of humanity into the gutter whence they spawned.

Ladies and gentlemen, I give you the life-size Barbie’s Dream House.

Of course it’s in Florida, why do you even bother to ask?

Barbie has opened her new dream house to visitors, and it’s not just young girls who are excited about checking it out.

The 10,000-square-foot “Barbie The Dreamhouse Experience” building has opened at Sawgrass Mills mall in Sunrise, Fla., beckoning to kids and adult Barbie collectors alike with a giant closet, bedroom, kitchen and more, all covered in Barbie’s signature pink.

Marl Davidson, a longtime Barbie collector and the owner of fashion doll-seller Marl & B Inc. in Bradenton, Fla., is definitely planning on making the trip south to check out the Barbie Dreamhouse, which took two years to build. There are only two in the world — the other opens this week in Berlin, Germany.

“I’ve been doing this for 26 years, and I’ve never seen anything like (The Dreamhouse Experience),’’ Davidson told TODAY.com. “When it comes to Barbie, anything goes. She always brings backs the warm fuzzies, usually a little girl’s first gift is a Barbie doll.”

The building includes rooms filled with Barbie dolls along the walls, a staff on hand that will glam up visitors, Barbie-style, and several interactive features.

“The Dreamhouse Experience marks the first time fans are able to experience Barbie’s dream life first hand,’’ Lori Pantel, vice president of global marketing for Barbie, said in a statement to TODAY.com. “We are pleased with attendance and look forward to more fans creating memorable moments with the Barbie brand.”

While Barbie lore places her fictional home in located in Malibu, Calif., a particularly large contingent of Barbie collectors can be found Florida. The most recent national convention for Barbie enthusiasts was held in Fort Lauderdale, and the state is also the home of Stanley Colorite, 41, known as “The Barbie Man” for his collection of more than 3,000 Barbie and Ken dolls at his home in Hudson, Fla.

“There are a lot of people in Florida that are collectors,’’ Davidson said. “The convention was fabulous, and there is a lot of enthusiasm here in the state.”

A possible challenge for Mattel, the company that owns the Barbie brand, could be convincing visitors to return and generate repeat business.

“If this is that wonderful, I think people will want to keep going back because some people just can’t get enough of Barbie,’’ Davidson said. “They eat it, drink it, sleep it. They’re obsessed.”

Stanley Colorite, mentioned above, is more than just a whack job who owns 2,000 Barbies and 1,000 Kens. Although that doesn’t diminish the fact that he is a whack job. 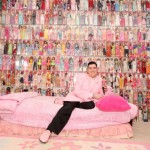 Click on the pic to see the full image. Yes, Stanley only wears Barbie colors and he’s living with a man who looks like a typical Irish grandpa. I’m sure parties their are lots of fun.

My friend, Kritsy Kay, is the voice of Barbie on all those DVDs poor moms are forced to endure. So, when you buy one, at least feel comforted that you’re supporting a really nice person.

Still, it seems that devoting 10,000 square feet to a Pepto colored monstrosity is a little odd. And exactly what kind of people will it attract? Well, Barbies are marketed to very young girls,about 3 years old to start, and they are marketed more heavily in rural areas and big box retailers.

In other words hundreds of thousands of Honey Boo Boo wanna-be’s will be descending on Sunrise, Florida.

A city which sports one shopping mall and a KISS tribute band.