You are here: Home / Superficial and Stupid is Not a Good Combo

Do you remember the bombing at the Boston Marathon? I do because I knew a couple of people in the race. It took several hours to find out they were safe. Which they were and are. Before we begin I will be the first to admit that there are a couple of unanswered questions; (1) “Why was there a shoot out if the kid didn’t have a gun?” springs to mind and is followed by; (2) “How is it legal to buy that much fireworks without a permit?” Beyond that, not so much. My first running clue that the FBI got it right was the fact that so many callers said “That’s my friend … (pick one or the other)…” when the pictures were first released. If it’s one or two then maybe they’re wrong, but they got hundreds of calls with the same information. You couldn’t get hundreds of random callers to agree on a flavor of cheese. So, they got the right guys. A situation like this is law enforcement’s worst nightmare. When your terrorist cell consists solely of you and an immediate relative the odds are heavily in favor of no one figuring out what you’re up to. At least not until after you do it. And that is a bad time to figure things out.

A friend of mine pointed me towards something that I just found staggering. Not your usual conspiracy nuts or anti-government screeds, but a group of people who seriously, and rabidly, want Dzhokhar Tsarnaev set free and his slate wiped clean.

And the main impetus behind their movement?

He’s too pretty to be a terrorist.

No, I am not making this up.

An online movement calling to free Boston bombings suspect Dzhokhar Tsarnaev is gathering pace – thanks to an army of teenage girls who believe he is “too beautiful to be a terrorist”.

Nicknamed “Jahar”, the 19-year-old, who is currently in custody and has been interrogated by the FBI over the April 15 explosions, has emerged as an unlikely heartthrob in the wake of the attacks, which killed three and maimed hundreds.

Facebook and Tumblr tribute accounts have been set up in support of the teen, and the hashtag #FreeJahar continues to periodically trend on Twitter.

OMG Free Jahar! @FreeJahar97
Yes i like Justin Bieber and i like Jahar but that has nothing to do with why i support him. I know hes innocent, he is far too beautiful.
3:56 PM – 25 Apr 2013

The New York Post spoke to one 18-year-old who insists the evidence against him does not add up and had planned to get words from one of Dzhokhar’s own last tweets inscribed on her permanently.

“Getting one of Jahar’s tweets tattooed on me tomorrow. Guess you could say I’m a #FreeJahar supporter,” @keepitbluntedd tweeted on May 7.

Alisha had earmarked Tsarnaev’s April 7 tweet reading: “If you have the knowledge and the inspiration, all that’s left is to take action” for a spot on her arm.

Since the story went live however, the waitress has had to put her plans on hold for now “out of respect of my family’s wishes. For now. It’s still something I definitely want,” she Tweeted.

Meanwhile a Facebook group entitled Dzhokhar Tsarnaev Free Jahar Movement has close to 6,500 followers, with many speculating Dzhokhar and his older brotherTamerlan were set up.

Further accounts exist, with “fans” leaving comments such as “I love you, you bomb my heart” and posting photographs of themselves in underwear, holding pieces of paper with Dzhokhar’s name scrawled across them. 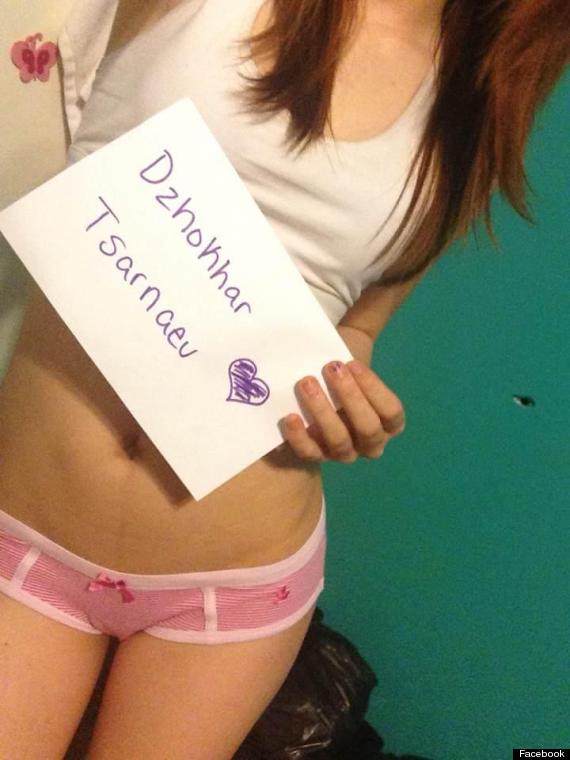 An image from a Dzhokar Tsarnaev Facebook ‘fan’ page

It’s not the first time Dzhokhar’s appearance has been commented on. Earlier this month, Mother Jones spoke to a woman who had a “fleeting fling” with the university student.

Speaking under condition of anonymity, she said: “I met him standing outside a building and honestly, his face was enough to capture my heart. ”

Wired calls the #FreeJahar campaign “a mix of conspiracy theories, sympathy for Tsarnaev and skepticism of the official narrative surrounding his arrest.” The Verge notes that for every message supporting Dzhokhar, “there’s a user expressing vitriolic disgust that Tsarnaev supporters exist.”

As you can see, the Free Jahar movement is being led by a mix of Justin Bieber fans and losers. Also, based on what I could see from Facebook posts and Twitter feeds, the majority of them are young, female and suburban.

That should send a chill through every parent reading this today.

Just remember that “Not your little girl” is pictured above in her underwear cheering for a terrorist.

How did this happen? Well, you can blame the segments of the media who consistently portray terrorists as turban wearing camel jockeys since stereotypes are easier to convey. Good looking young men like Dzhokhar are not considered to be threats.

That is why thoughts like these get espoused as though they are useful in any way. 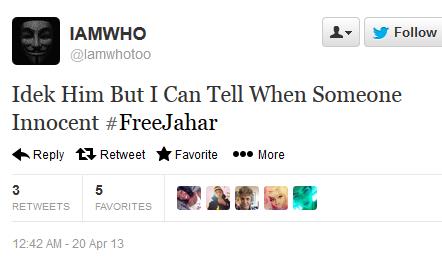 The Flaming Lips – You Lust (NSFW) from Delo Creative