You are here: Home / Vacation Don’ts
When I was 7 years old my mother almost killed me. On purpose. We were on the traditional American vacation; driving for hours without stopping or seeing anything. The point of this particular automotive marathon was to get to the Rocky Mountains and do the Pikes Peak tour. Yes, the same Pikes Peak where I was nearly gutted by a moose about 13 years later. At the time I thought seeing a mountain would be “neat” and “cool” but in retrospect i should probably just stay the hell out of Colorado on general principles. Anyway, mom and I had just passed through the nuclear wasteland called Nebraska when you could just make out the mountains in the distance. The sun was just starting to set and, while distant and small, it was still a beautiful sight. Or so my mother claimed. After she waxed rhapsodic about the sight for a few minutes I petulantly – I was 7 remember? – said, “Fine, can I go back to my comic book now?” It was at that point she almost killed me.

Speaking of moose, IKEA just recalled their moose lasagna because it is made with pork. There is so much wrong with that statement that I don’t know where to begin.

In non-moose related news, the whole point of today’s blog is to help you avoid some vacation pitfalls. Like don’t get attacked by moose. Or don’t get married in a Denny’s.

Can’t decide which you love more — your honey or maple syrup? If you’re in Las Vegas, you’re in luck. Behind its bright-yellow, abstract facade, the Denny’s restaurant in the Neonopolis district on Fremont Street (a short drive from the Strip) that opened last November is now accepting bookings for its in-house wedding chapel.

Given that other fast food-lover lovers have gotten hitched at White Castle, McDonald’s, Taco Bell and KFC, the idea of a chain diner carving out space for weddings — especially in Las Vegas, epicenter of quirky wedding themes — might not be as strange as it sounds.

The company says it’s had “many inquiries” from others who want to pledge their eternal love over a Lumberjack Slam or Moons Over My Hammy.

An Iowa bride and groom were the first to tie the knot earlier this week.

For $95, couples get a bottle of champagne, a Pancake Puppie wedding cake (Denny’s answer to the cake-pop trend) and “Just Married” T-shirts. Unfortunately for bacon lovers, Denny’s says it currently has no plans to turns its caramel-bacon brownie sundae or bacon-stuffed caramel French toast into wedding cake.

The package doesn’t include a photographer, but the celebrants can commemorate their special day in the restaurant’s photo booth. And this Denny’s has a full bar, so guests can toast the newlyweds with something stronger than a maple bacon milkshake. Maybe the Grand Slamosa — a mimosa with Grand Mariner — would fit the bill.

What the Grand Slam Breakfast has joined, let no one separate.

When I was a randy teen we would hang out at Denny’s late at night. The idea was simple. As long as we had a cup of coffee we could hang out. So we could stay out late at night. And occasionally boink in the parking lot. But, I can promise you this, I never once thought about getting married there.

But, if you do find yourself getting married at Denny’s then this next vacation thrill is probably right up your alley.

If you’ve got a couple hundred bucks to burn and a masochistic streak, then maybe it’s time to check out a Detroit business that promises to give the thrill of a real-life abduction.

That’s right, in a city with more than its fair share of true crime, the founder of Extreme Kidnapping is looking for customers to pay him to be kidnapped. 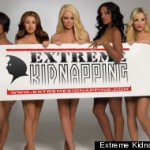 “This service caters to the extreme sports adventurer who is bored with what’s currently available; this takes it to a whole other level,” says entrepreneur Adam Thick aka in the rap world as Mr. Scrillion. “If you don’t feel like you’re really being kidnapped and your life is in danger, then we’re not doing our job.”

Extreme Kidnapping had a low profile for years until a GQ writer signed on to get shanghaied and merrily recalled his night in captivity.

For $1,500 Drew Magary was handcuffed, duct taped, soaked, slapped and zapped with a stun gun (and more) by Thick, a convicted counterfeiter and his henchmen.

There are more economic experiences available that might appeal to shoppers who are cautious about passing a night in a dingy basement. Thick customizes each abduction and unlike an old-fashioned kidnapping, an Extreme Therapy hostage has the ability to call off the goons and abort the torture at any moment by uttering a preselected safe word.

As a memento, all customers get a video of willingly being held against their will.

The Michael Douglass film “The Game” provided the idea for Extreme Kidnapping.

The company’s motto might as well be, “It should be against the law to have this much fun.”

“…handcuffed, duct taped, soaked, slapped and zapped with a stun gun (and more)…”

And what could possibly go wrong? Like cops accidentally seeing this going down and punching holes in otherwise solid people. On the other hand, if you were talked into getting married at a Denny’s this might seem like a good out.

TSURUFOTO Presents… Isabella Misery in The Return Of Bluebeard (NSFW)