You are here: Home / Rampaging Rodents of Doom!
I have written about the impending Armageddon so often that it should have it’s own sub-site up here. And when I have avoided Armageddon I’ve written about various forms of the Apocalypse that may befall us. And that’s okay. Everyone needs a good laugh now and then. And God knows the varying responses to the numerous apocalie (is that a word? it is now) have provided gut busting guffaws for the masses. My heroes are still the fun loving, if not all that smart, folks who planned on riding out the last apocalypse in mobile homes. Still and all, much of the gloom and doom associated with those stories has been hypothetical, at best. Rational people knew full well that the Mayans had predicted nothing, that there was no planet Niribu going to slam into us, there are no comets large enough to destroy our sun and so on. Simple physics can prove 99% of the idiots wrong and common sense takes care of the rest.

Ms. Marion Webster, no relation to the dictionary, has been fined by an English judge for using her form of vigilante justice to try and stop ninja squirrels from destroying her flowers.

Go ahead and read that again. I didn’t get any of it wrong.

This is pretty nuts.

Marion Webster, a 78-year-old U.K. woman found guilty of tearing up flowers in her neighbor’s garden, may have done it because she believed her own garden had been destroyed by a trained squirrel.

Webster, who has been dubbed a “neighbor from Hell,” according to the Birmingham Mail, was found guilty last week of criminal damage and ordered by a judge to keep the peace for six months.

Prosecuting attorney Kaya Ball told Solihull Magistrates Court that the flowers were not “just an isolated incident.” Since 2002, the West Midlands Police have received more than 40 complaints about Webster’s behavior, a spokeswoman told the Birmingham Mail. Reported incidents have included allegations of Webster yelling and swearing at passers by with no provocation.

“She is very proud of her garden,” one neighbor said, according to the Daily Mail, “and she got it into her head that someone had it in for her and was jealous of her flowers … she became convinced a resident had trained a squirrel to enter her garden after dark and tear up her flowers.”

As has been noted up here before, Chinese scientists, who have way too much time and money, have been trying to genetically alter mice so they can sing. Once they can sing it is hoped they will be able to vocalize. In other words, intelligent, talking mice will be roaming the planet.

And over in Iran, as if our troops don’t have enough problems, various companies have been dumping radioactive waste and other pollutants into the soil and now there is a species of rat that is bigger than a lot of dogs.

Too bad Iran can’t Photoshop its way out of this problem.

Although Tehran has had a decades-long struggle with rats, its rodent problem seems to have grown to epic proportions as of late. Giant rats that have been flushed out of their nests by melting snow are the focus of a renewed extermination effort in the Iranian capital, according to several reports.

Some of the rodents reportedly weigh as much as 11 pounds. 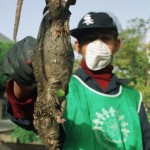 The International Business Times quoted Tehran city council environment adviser Ismail Kahram, who told Iranian news website Qudsonline.ir that the rats “seem to have had a genetic mutation, probably as a result of radiations and the chemical used on them.”

“They are now bigger and look different. These are changes that normally take millions of years of evolution. They have jumped from 60 grams to five kilos, and cats are now smaller than them,” Kahram said, according to the outlet.

The Huffington Post reached out to several rat experts to assess the validity of Kahram’s claim. Dr. David Baker, laboratory animal veterinarian at LSU, told HuffPost that it’s unlikely the rats got super-sized as the result of a mutation.

“Nearly all genetic mutations identified across the field of biology are harmful and confer a disadvantage to the species rather than an advantage. It’s not like in the sci-fi movies,” Baker said in an email.

However, he pointed out that there are several species of “giant” rats found around the world that can achieve the sizes described by Kahram. Because their growth plates don’t fuse after puberty, Baker explained, even common black rats can get very large.

“During the Middle Ages, black rats in Europe reportedly grew large enough — and children were small enough — to carry off babies. Those had to have been some big rats,” Baker wrote.

Regardless of size, Tehran is reportedly ramping up its response to the rodents. Apparently a team of army snipers is now hunting the rats by night, using rifles equipped with infrared scopes. IBT reported that 2,205 rats have been killed so far.

It’s like a warped bonus round of “Big Buck Hunter,” except the only ones scoring points off this emergency are the media. The Times of Israel made a “Princess Bride” reference in its coverage about the rats, whereas the Times of London took aim at Tehran’s “experience when it comes to [exterminating]… its political opponents.”

Whether Tehran’s rats are mutated or not, some scientists have reported that certain rat populations are becoming resistant to poison. In 2012, a researchers in Britain published findings that estimated 75 percent of rats in West England were resistant to rodenticide.

Is it just me or does it make you get all squishy inside knowing that the giant rat killer is a Sox fan. No wimpy Cubs fans for a job like that, no sirree Bob. You got something from a low buck horror flick crawling out of the ground you want a Sox fan to deal with that ….. stuff.

And here’s the scary part. Right here in the U.S. of A. we have the genetic cousins of rats and our little monsters weigh in at around 100 lbs. No, that’s not a typo. Capybaras, the worlds largest rodents, have migrated from their South American jungle homes to Southern California and they have infiltrated the water system.

Yet another reason to stay the hell out of California.

Listen to Bill McCormick on WBIG (FOX! Sports) this Thursday around 9:10 AM.
Visit us on Rebel Mouse for even more fun!
contact Bill McCormick