You are here: Home / From the Minds of Children
The mind of a child is a wonderful thing. It sees the fairies and the goblins of the world and does not dispute their existence. It can, without effort, turn a pencil into a rocket ship or a piece of lint into an angry bug. It parses the universe not into black and white but into brilliant rainbow hues with each color hiding a different source of joy. The artists among us, and I mean that to include the mathematicians who envision the heart of the universe and share their visions, retain some of those attributes help them see the unseeable. These people contribute mightily to the human condition. They buoy it in beauty and unforeseen truths. Whether its Harlan Ellison’s paragraph on how jelly beans can be used to foment rebellion to Maya Angelou’s look at the meaning of freedom, these people give us new insights into our world that we might have otherwise missed.

These are the minds that probe and question and love getting answers. They look at the universe and realize we are a young race on a young planet. Might there be elder species roaming the stars? They tend to lean towards answering yes.

But for every Yin there is a Yang. Some do not see the wonders of the world but the horrors of the dark. They are quick to cry “WITCH” at anything they do not understand. If it is beyond their ability to create then it must have been done by supernatural or alien forces. Never mind logic or facts, they knew this to be true. James Fox is one such person.

He creates movies that rational people never see. And now he is offering a reward for whoever can prove him right.

Nearly every day, videos, photos and eyewitness accounts of UFOs pop up on the Internet.

Some are hoaxes. Some are quirks in the weather. Some sightings are never explained and forevermore remain UFOs.

The photo (herein), taken by Hannah McRoberts on Vancouver Island in British Columbia in 1981, is considered one of the most credible UFO pictures. 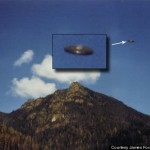 Still, never has there been widely accepted positive proof of an extraterrestrial spacecraft, though there are those who believe various government agencies around the world have conspired to hide the truth.

Filmmaker James Fox will make this announcement as part of the promotion for his upcoming movie The 701, inspired by the Air Force’s two-decade UFO study, Project Blue Book.

“One of the aspects that sets our film apart is the producers’ commitment to bringing forth never-before-seen evidence. As part of this effort, we’re offering a $100,000 reward for the best proof that some UFOs are alien spacecraft,” Fox told The Huffington Post exclusively.

“This material can be in the form of a photograph, video or film footage or debris from an alleged crash site. But it must be able to withstand scientific scrutiny by our chosen panel.

“Our intent is not to create another television UFO documentary, but to produce a feature film for worldwide theatrical release — ‘The 701’ — the most compelling film ever produced on UFOs,” Fox said.

“701 is the number the government doesn’t want you to know about. The U.S. Air Force had a serious problem, starting in the late 1940s. Technological devices were invading our airspace with total impunity. Glinting, metallic discs, which could accelerate and maneuver in ways hard to imagine, were being seen in incredible numbers by reliable witnesses. Many of them were pilots.”

Fox, one of the co-stars of National Geographic’s Chasing UFOs, will be sharing the IUFOC podium over the five-day event with former nuclear physicist Stanton Friedman; ex-FBI Special Agent (and host of the Syfy Channel’s Fact, or Faked) Ben Hansen; skeptical research scientist Ben McGee; former UK Ministry of Defense officer Nick Pope; and regression therapist Barbara Lamb, among others, presenting a compelling variety of topics, including:

Oh man, where do I begin. How about the obvious? If anyone had verifiable proof of alien life they would be instant millionaires. The reward is just a cheap PR stunt from a talentless hack.

Are the 701 unexplained instances interesting? Absolutely. Are they proof of interstellar visitations? Not even a little bit. As for his assertion that the number 701 has been kept secret by the evil government people who all wear black suits and talk in monotone syllables, he’s just a touch mistaken. That information has been available to the public, and often cited, since 1970 when the FBI declassified a bunch of stuff.

But, let’s be honest here, the people who find idiots like Fox credible are the same ones who believe that the Earth is hollow or flat (it’s 50/50 either way for them). People like Fox prey on ignorance for profit. They know there is no way to prove them wrong since they cite nothing but rumors as evidence. And people like Alejandro Rojas who give these tools free press are just as culpable to the idiocy that washes up on our shores daily.

While I can’t educate the world with a single blog I can ask that my readers do this; when someone states that they KNOW ….. make them fill in that statement with facts. Real facts, not “I read it on the Internet” kind of stuff. If they are unsure of the difference, point them here and let them read about the differences between hunches and theories and facts.

It’s worth a shot.