You are here: Home / Naked Ambition
This site is not prudish. A quick search for the word “naked” will garner you hours of enjoyable reading. The same holds true if you search for “porn.” In fact you can even limit your search to “boobs” and you will be rewarded. Even so, today’s stories gave me pause. Not because they’re salacious, because they aren’t. Nor are they exploitative or degrading. Contrariwise they are uplifting and positive. Two things I’m not that comfortable with. If you want stories of happy puppies or stuff like that this really isn’t your blog. That being said, I’m going to give it the old school try today anyway. And the old school try would be the most appropriate way when you consider the subject matter.

The town of Montserrat in Spain is, like everywhere else, having budget troubles. To save money they cut school bus service to anyone living closer than 3 KM to the school. Well, there are some very dangerous roads in that area so moms wanted the service restored. So they got a budget, put together a plan and then took off all their clothes to make a calendar.

Which they sell locally only.

A group of fearless mothers in Spain have gone topless in order to save their school’s bus.

The women, all mothers of children in the town of Montserrat, decided to take the rather unconventional course of action in December, after authorities in the region decided to restrict school bus pick-ups in an attempt to save money, according to Euronews.

A topless calendar may seem extreme, but for many families, it was worth it.

After bus service was cut, families were forced to navigate a difficult and often long walk to school, according to The Telegraph.

NRP reports that Eva Maria Casas Sancho’s children were forced to walk almost 3 miles to their elementary school after the cuts.

“There’s no sidewalk and there are lots of trucks going fast,” said Sancho, a 41-year-old mother of three, and the calendar’s Ms. June. “The truth is, it’s pretty dangerous for kids to be walking there.”

Montserrat is located near Valencia, one of the country’s largest cities, and also a region extremely hard hit by the burst of a real estate bubble, according to Reuters. Valencia and its northern neighbor Catalonia are the country’s two most indebted areas.

The calendar has since proved immensely popular in the small Mediterranean town of around 7,000, according to NPR.

The Associated Press reports that the mothers need about $4,100 to fund the bus, driver and monitor for a month. So far, calendar sales have raised enough money to keep the bus running through June.

Well, if being naked can get kids to school safely why shouldn’t it get people to eat healthier?

Yes kids, the hottest fad this side of the Harlem Shake is Naked Vegan Cooking.

When Jess, Greta, and Zach moved in together, they decided to bare more than their souls to each other — at least in the kitchen.

Jess, 24, and Greta, 21, became instant cooking competitors, constantly trying to out-do the other in creative recipes. Zach, 24, just liked to walk around naked.

Then one day the three students from Manchester, UK, decided to put the competition — and their duds — behind them.

They stripped down and started Naked Vegan Cooking dot com, a website where the roommates and contributors share vegan recipes that they cooked in the nude.

“We realized that by going naked, we created a platform to talk about a whole bunch of issues we are interested in,” Jess explained to the Huffington Post in an email.

Those interests include body image, feminism, and how the media portrays them.

Their website and Facebook page have recently gotten a rise out of people, and led to several side gigs. The trio has had art exhibitions, pop-up restaurants, and is just finishing off an anthology of body image writings.

Even in an age of Instagramming every bite we eat, few are willing to shed everything for the camera. The nakedvegancooking.com team wears its birthday suit for a reason.

“I’ve had issues with body image and eating disorders in the past,” Jess told HuffPost WeirdNews. “This has been a healing process for me. People are saturated daily with unrealistic images of how bodies ‘should be’ from magazines, advertisements, and the media. Showing unairbrushed images on the internet and creating a space to talk about these issues is really important.”

The roommates don’t always cook in the nude. It’s cold in Manchester.

“We’re poor students,” Jess said. “So we cannot afford to put the heating on so much in winter.”

Also, nudity isn’t mandatory for house guests, though the roommates surround themselves with free thinkers. On occasion, Jess said, the guests have been the ones to get naked and cook while the roommates stayed clothed. 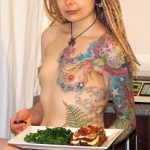 Not everyone on the Internet is so excited about the photos on the site, which feature the roommates cooking up their favorite dishes and then covering their erogenous zones with their plates.

“Half the time we were being called ‘fat,’ and the other half of the time people were saying that if we really cared about positive body image we would have larger people on the site,” Jess said. “I guess it just proves how fickle the internet can be.”

Luckily, most of their feedback has been positive. Still, the question has to be asked: Aren’t there risks to naked cooking? HuffPost Weird News editor, Buck Wolf, for example, pointed out that bacon could be especially painful to cook without clothes.

“In the early days we did have a few slip ups, particularly with hot oil,” Jess said. “We quickly learned that aprons were not the enemy!”

Okay, to be fair, the lasagna (pictured above) looks delicious.

But have we really sunk that low that the only way we’ll pay attention any more is if we are being talked to by naked people?

Is Anyone Up in Providence from Film From The Future Productions on Vimeo.