You are here: Home / SCIENCE!
Ah, where to begin today. After the British government attempted to lure women into scientific fields with an ad more demeaning than anything ever released by Victoria’s Secret a group of actual female scientists responded with an ad of their own. Their ad features real scientists having fun with science and dancing to “I’m Sexy and I Know It.” Ladies, there is a career for you in science and it does not require you to do math on a bathroom mirror or wear heels. The fact that I need to point that out simply proves that there is another category where we have a long way to go. Consider it added to my “to do” list. Put it this way, the first video, stripped of its techno soundtrack and embellished with David Lee Roth in his prime would have been great fun on MTV in 1985. Much like Hot for Teacher was in its day. In fact there are a couple of scenes in the first video that appear to have been outtakes from the Van Halen classic. That is not actually a good thing in this case.

This is not to say that science can’t be sexy. Daan Rosengarde has designed the ultimate example of sexy science. He has designed a dress that becomes more and more transparent the more excited a woman gets.

You don’t get to choose whether this dress is revealing or not — your carnal instincts do.

The ‘Intimacy 2.0’ dress, designed by Daan Roosegaarde, is getting a rise out of the fashion world because its opaque fabric becomes transparent when you get aroused. Finally, all the cards will be on the table. You’ll have your date saying, “Is your dress disappearing, or are you just happy to see me?” 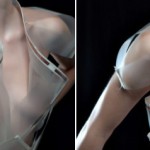 The already barely-there garment features ribbons of leather and opaque “e-foils,” which can detect the model’s heartbeat, the Daily Mail reports.

Another caveat: Though Roosegaarde has said he’s “in talks” to produce a ready-to-wear line of Intimacy clothing, the current dress is only a prototype and a project.

Not to be a noodge or rain on anyone’s parade, but doesn’t a heartbeat increase if you see a car crash, hear some exciting music or in any of a hundred other situations? You might find yourself being the hit of the party for all the wrong, yet oh so right, reasons.

So what can I do to get your heartbeat down? Easy. Let’s discuss the joys of whale poop.

What’s yellowish-gray, stinks to high heaven and is worth tens of thousands of dollars per pound?

Just ask Ken Wilman, whose dog Madge went nuts over a dirty old rock the pair found on a lonely, windswept beach near Morecambe, England. But it wasn’t actually a rock: “When I picked it up and smelled it, I put it back down again, and I thought ‘urgh,'” Wilman told the BBC.

Wilman didn’t think much of the strange blob until he got home and, like any enterprising treasure hunter, immediately did a Google search. The chunky object, Wilman learned, was probably a valuable piece of ambergris, which comes from the digestive tract of the sperm whale and is a very expensive ingredient in luxury fragrances such as Chanel No. 5.

Realizing the foul stench emitted by the lump was actually the scent of money, Wilman sprang into action. “When I saw how much it could be worth, I went back to the beach and grabbed it!” Wilman told the Metro.

One French ambergris dealer has already offered Wilman $68,000 for his beach find, though it’s probably worth much more. “It’s quite a find,” Chris Hill, curator at the Aquarium of the Lakes in Cumbria, England, told the Mirror.

“There are places in Europe that will buy it from you,” Hill said. “They will age it, like a fine wine, and then test it for perfume. “How much it’s worth will depend on how fresh it is, but it’s potentially $180,000.”

Despite the centuries-old passion for ambergris, nobody’s really certain how the sperm whale produces it, or how the whale excretes the lump.

Most experts agree that whales create ambergris inside their intestines as a kind of fatty coating around sharp, hard-to-digest items, like the beaks of giant squid (a favorite food of the whale), the BBC reports. And squid beaks have been found inside pieces of ambergris.

Kemp, the author of “Floating Gold: the Natural (and Unnatural) History of Ambergris” (University Of Chicago Press, 2012), notes that the stuff commands a high price because “only one percent of the 350,000 sperm whales can actually make it,” he told ABC News. “Because it’s so rare, it’s very valuable.”

Fearing a flood of fortune hunters looking for ambergris, local authorities in Morecambe are now warning beachcombers of some potential risks involved in their search.

“The tide comes in so very quickly that it catches people unaware,” Mike Guy, manager of lifeboat operations for Morecambe, told the BBC. “We’re really worried about people just wandering off on the beach searching for ambergris. They’re very, very unlikely to find any because it’s very rare.”

Just when you think that people getting killed hunting pythons was the dumbest way to die ever invented, along comes a group who could die hunting whale poop. A quick update on the python hunt. As of this writing there have been over 1,000 hunters and under 50 pythons killed. Many humans have suffered various injuries but no fatalities yet.

This is like a real life episode of Benny Hill.

So, what to do about all of this? Well, the best solution I can see is robots. Unfortunately, as Jerremy Hsu points out, robots are meant to be feared and some may want to kill us.

Metal Madness
Real robot names such as Roomba and Asimo don’t evoke as much fear as the fictional “Terminator.” But consider that Roomba, the automated vacuum cleaner, is manufactured by iRobot, creator also of armed robot warriors for the U.S. military. And Asimo represents just the first wave of an incoming tsunami of robots that strive to look and act eerily human.

It goes beyond automated vacuums and mildly entertaining dance-bots. Japan and Korea plan to deploy humanoid robots to care for the elderly, while the United States already fields thousands of robot warriors on the modern battlefield. Meanwhile, plenty of people have enhanced their bodies technologically in ways that bring them closer to their robotic brethren.

So it’s OK to become a bit of a paranoid android, because many experts say that the robotic future is rapidly approaching, if not already here. Robots probably won’t completely take over or annihilate the human race anytime soon, but they may supplant us by other means — and LiveScience is here to count the reasons why you need not hide your fear of the metal ones.

Your Grandkids Will Be Robots
Whether humans and robots fight or make love, the most probable scenario involves marching toward a convergence point in the future. On one hand, humans continue to add more technological gizmos and tiny computers to their daily wear. You can already see many such 21st-century cyborgs playing around with their iPhones, or staring off into the distance with earbuds piping music into their heads. Artificial limbs, organs and bionic eyes? Check. Coming from the other direction, robots have steadily improved in almost every possible way: walking, talking and learning. Man and machine increasingly look alike, and at some point the difference may not exist. But on a brighter note, humans won’t worry so much about robots once they’ve merged with them. See you on the other side.

Robots Take Our Jobs
Anything you can do, they can do better. Well, lots of things, anyway. Modern humans have not gone obsolete just yet, but robots have already found their place as space explorers that can endure harsh environments off and on Earth. They have also brought their tireless efficiency to everything from assembly line work to humdrum gene sequencing in labs, and have appeared in growing numbers on real-life battlefields — although the latter can lead to the different problem if robots stage a rebellion, or even just have a weapons malfunction. For now, robots complement rather than replace elements of the human workforce and armed forces due to limits on their intelligence. But they’re evolving quickly, and a few have even begun tinkering with science themselves.

Robot Insurrection: Kill All Humans
A scenario where machines rise up against their makers presents perhaps the least appealing convergence of science fiction and real life. That doesn’t mean preliminary signs of an incipient insurrection don’t exist, though. Thousands of drones and ground robots have been deployed by many nations, and particularly the United States in Iraq and Afghanistan. An automatic antiaircraft gun killed human soldiers on its own when it malfunctioned during a South African training exercise. Military researchers refer to “Terminator” scenarios, and seriously discuss how armed robots are changing the rules and ways of modern war. If that’s not enough to make you a bit leery, consider that Great Britain has established a network of satellites for the purpose of coordinating all those drones and other military assets. It shares the same name as a certain villainous artificial intelligence that dominates the “Terminator” movies — Skynet.

Humans May Prefer Robot Lovers
Experts aren’t wondering if humans will ever make love to robots — they’re already discussing what happens when that day comes. It may sound snicker-worthy, but consider that many people have had online relationships that get pretty intimate through Internet chat rooms and participate in socially intense massively multiplayer online games for years. A flesh-and-steel robot that feels, looks and sounds like a human would have even greater appeal, robotics researchers say. And if history serves as any guide, you don’t need the perfect Stepford Wife to tempt spouses or significant others into a little robotic addiction and strain existing human relationships.

Robots Steal Our Hearts
Robots don’t need to take over by force, if humans have already fallen for their cute, clumsy antics. Blame the human brain for allowing toddlers and soldiers alike to feel warm fuzzy feelings for robots. People are hardwired to perceive faces and get emotional about almost everything, whether it’s a stuffed animal or a car. However, robots still have to navigate one tricky obstacle of the mind — the “Uncanny Valley” phenomenon where a robot looks almost human, save for a bizarre twitch or stutter or glassy-eyed stare which can creep people out. Many researchers currently try to bypass the issue by simply designing robots to look less human, and retain that clunky robotic cuteness

If you know that phrase you know how cute our eventual overlords can be.

Robots of Brixton from Kibwe Tavares on Vimeo.

Visit us on Rebel Mouse for even more fun!