You are here: Home / Priorities 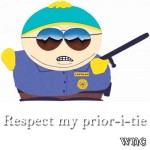 There are times, daily around here, when you look at someone and wonder just what the heck they were thinking. When someone does or says something so brain crushingly dumb that it leaves you in awe. I’ll give you an example. Back in 1999 I was driving on the Kennedy Expressway. Traffic was kind of heavy. As I approached Armitage a car was coming up the ramp to merge into traffic. There was another car in its way in the lane. Of course there were lots of cars in the lane, that’s what heavy traffic means. Anyway either car could have made room for the other. But, nooooo, that would have been too easy. So, much to my amusement, the two cars kept aiming for the same patch of asphalt at around 3 mph. And, eventually, they met. And got their bumpers locked and immediately snarled traffic even worse. It was the only 911 call I’ve ever made while laughing. As I explained to the 911 operator people that stupid need to be removed from society. She seemed to agree with me.

It was like watching a real world version of The Zax.

Our first story today involves many bad life choices. But since it happened in Florida you kind of knew that going in.

A Florida man just wanted ketchup on his Philly cheesesteak sandwich at Subway. When he didn’t get it, a confrontation with the sandwich maker ensued, leading to a 911 call.

Now-former Subway employee Lawrence Ordone told TV station WFTV he was working behind the counter at the sandwich restaurant in an Orlando Walmart on New Year’s night, when a man ordered a Philly cheesesteak.

“He (the customer) wants ketchup on the Philly cheesesteak and I have never put — we don’t even have ketchup at Subway — I’ve never put ketchup on anybody’s sandwich,” Ordone told WFTV.

The restaurant chain — famed for its “$5 footlongs” and diet commercials with “Subway Guy” Jared Fogle — does not offer ketchup, according to a menu on the Subway website. Only condiments like mustard, mayo, vinegar and oil are available.

When the customer, Luis Martinez, rejected the ketchup-free sandwich, another customer in line offered to buy it, WFTV reported.

It’s disputed what exactly happened next. Ordone claims Martinez mouthed off to the customer, so he came around the counter, and he told WFTV he felt threatened when Martinez said he had “something” for him and walked toward his car.

Martinez claims Ordone threatened to kill him in front of his wife and called 911, WFTV reported.

“I was scared,” Martinez told WFTV. “Next thing, I’m thinking a gun’s going to come out.”

By the time the police arrived, Ordone reportedly had fled the scene.

Whatever the details, Ordone said he regrets his actions that led to his dismissal. “You can go buy your own ketchup, and I promise to God, you can put as much as you want on it and nobody’s going to say nothing,” he told WFTV.

A spokesperson at Subway’s corporate headquarters did not immediately return NBC News’ request for comment Friday.

Oh man, where do I begin? First off asking for ketchup in a sub shop is like asking for a pork chop in Israel. It’s a giant waste of time. Second off, a dude just lost his job because he violently opposed the use of ketchup.

I mean, I get it, if someone puts ketchup on a hot dog you pat them on the head and ask them not to procreate. But you don’t try and kill them. That’s just overreacting.

But one question I constantly get asked is “Where do those weird looking meats at Subway come from?” And, naturally, Florida has the answer. It seems there’s been an uptick in animal sacrifices.

Residents say they found a decapitated goat and three chickens that washed up on the shore of South Beach over the past weekend.

Some of the residents said they first saw the dead animals Saturday on the rocks in the water behind The Floridian, a South Beach condominium on Biscayne Bay.

On Sunday, residents said the carcasses were laying on the retaining wall along the water.

“At first, I thought it was a prop,” said resident Quintin Hill. “I really thought it was some kind of setup. That’s why when I walked around the corner I was like, ‘Am I walking into something I’m not supposed to?'”

Animal activist Richard Couto said his mission is to expose and stop animal abuse. He believed the animals might have been killed as part of a religious ceremony and then were dumped into the bay.

“We came down this morning and sure enough, there was a bag with headless goats and chickens, roosters, that sort of thing,” said Couto.

Couto said he feared the animals may have abused before they were killed, although the origin of the animals was not immediately known.

“Who is sacrificing around here? I don’t know,” said Hill.

Animal sacrifice is legal and protected under the First Amendment of the U.S. Constitution. Sacrifices are also a part of some religious rites.

“I think that too much freedom, wrong freedom in this country,” said Floridian resident Tatiana Litviakova.

“I’ve seen goats and cats and chickens and all kinds of stuff,” said Andrews. “Nothing surprises me, not on the beach. You see everything on the beach.”

Andrews and another city employee said they scooped up the carcasses Sunday afternoon. The owner of the animals, who is still unknown, could be fined for improper disposal.

Hey, it’s Florida, I’m only surprised that they aren’t recreating Lord of the Flies in shopping malls. People are so inured to Floridians acting like Floridians that nothing short of rampant human sacrifices is going to detour the tourism industry.