In Mexico archaeologists found wildly deformed skulls. Idiots immediately clamped on the discovery as proof of alien life on earth. Everyone not wearing a tinfoil hat knew what the discovery really meant.

Human skulls deliberately warped into strange, alien-like shapes have been unearthed in a 1,000-year-old cemetery in Mexico, researchers say.

The practice of deforming skulls of children as they grew was common in Central America, and these findings suggest the tradition spread farther north than had been thought, scientists added. 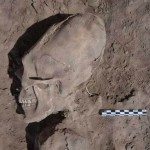 The cemetery was discovered by residents of the small Mexican village of Onavas in 1999 as they were building an irrigation canal. It is the first pre-Hispanic cemetery found in the northern Mexican state of Sonora.

The site, referred to as El Cementerio, contained the remains of 25 human burials. Thirteen of them had deformed skulls, which were elongate and pointy at the back, and five had mutilated teeth. [ See Photos of the ‘Alien’ Skulls ]

Dental mutilation involves filing or grinding teeth into odd shapes, while cranial deformation involves distorting the normal growth of a child’s skull by applying force — for example, by using cloths to bind wooden boards against their heads.

“Cranial deformation has been used by different societies in the world as a ritual practice, or for distinction of status within a group or to distinguish between social groups,” said researcher Cristina García Moreno, an archaeologist at Arizona State University. “The reason why these individuals at El Cementerio deformed their skulls is still unknown.”

“The most common comment I’ve read from people that see the pictures of cranial deformation has been that they think that those people were ‘aliens,'” García added. “I could say that some say that as a joke, but the interesting thing is that some do think so. Obviously we are talking about human beings, not of aliens.”

There are living examples of people who self mutilate for fun and religious reasons. Of course when has reality ever influenced the drooling tools who post their baseless screeds on the internet?

One of the – admittedly legitimate – beefs about space travel is that it is thrillingly expensive. And while scientists will claim that they do science for science’s sake, they are human too. They have families, they have friends, they hang at corner bars, they shoot pool, they have crazy ex-girlfriends and so on. In other words, they are just like us. So when scientists in Germany announced that had found an extra-solar solution to our energy crisis, science took a deep breath and smiled.

Have our wishes been answered? Scientists have found an oil field which contains 200 times more hydrocarbons than there is water on the whole of the Earth.

Time to wave peak oil goodbye forever… but before you do I should probably inform you of the tiny hiccup in any plan to develop this oil field.

The scientists work at the Max Planck Institute in Germany, and using the 30m-telescope of the Institute for Radio Astronomy they discovered a vast cloud of hydrocarbons within the Horsehead Nebula galaxy in the Orion constellation.

Upon discovery of the cloud IRAM astronomer Viviana Guzman declared that, “The nebula contains 200 times more hydrocarbons than the total amount of water on Earth!”

Now like me you might be wondering how oil, which is supposedly produced from organic matter buried millions of years ago, could possibly exist in space. Well it turns out that these hydrocarbons were likely created by the fragmentation of giant carbonaceous molecules called polycyclic aromatic hydrocarbons, which are produced during the death of a star.

There is even a theory that molecules such as these could have served as the first organic compounds for creating life.

Just send this to the oil companies and watch the faster-than-light funding go through the roof. Then we could visit all those cool places that appear to be capable of supporting human life.

Well, we’d have to live somewhere while we were gathering all that oil.

May as well be someplace nice.

The Aurora from TSO Photography on Vimeo.