You are here: Home / Too Stupid To Steal
The nice people over at Cracked Magazine have noted that the world is full of stupid people who have internet access. Judging by the article I am guessing they will soon discover, and write about the fact, that there is a planet full of air outside and we are all welcome to breathe it. Regular readers here do not need the obvious pointed out to them. They have figured out the basic stuff and come here for a more in depth analysis of the human condition. Which, as far as I can tell, resembles some form of social psoriasis. If you are reading this, and I am assuming you are, then all you need to do to see what I mean is scroll down to the search engine on the right hand side and toss the word stupid in it. Or, if that’s too much like work, just click on the word in the previous sentence. You will find article after article devoted to stupid people. There is also one article that contains a Japanese lesbian fantasy film. I like to leave little gifts for the regulars. Like you. And you. But, sorry, not you.

Well, I can’t please everyone.

So let’s take a gander at some people who make cops laugh. We’ll start in San Bernadino California where a criminal mastermind was selling pot in the police parking lot.

Authorities said on Wednesday that two slow-witted suspects in the Inland Empire made their job as easy as possible.

You have to wonder exactly what 32-year-old Wesley Taylor was thinking.

Police say he was carrying a duffle bag filled with 13 pounds of high-quality marijuana in broad daylight, and he chose a secured police parking lot as a place to hide.

Police grew suspicious and moved in. They found all the marijuana and arrested him.

San Bernardino Police Capt. Gwendolyn Waters said Taylor was trying to get away from someone.

“He saw his opportunity to slide through the gate. He took it, having no idea that he was going into a police parking lot,” she said.

It was the second curious choice made by an alleged criminal in just the past few days.

Last Friday, an inmate was released from the San Bernardino County Jail. According to the sheriff’s department, not only did he somehow steal an orange inmate suit, for some reason, he then changed back into it and tried to board a public bus while wearing it.

The bus driver called police, and the inmate was re-arrested – this time on misdemeanor theft charges.

“None of it makes any sense at all,” said Cindy Bachman of the San Bernardino County Sheriff’s Department. “He took his street clothes off and put the jail clothing back on after being released from custody … found his way right back into West Valley just about an hour after he was released.”

The poor guy was just confused. He thought the orange jumpsuit was a fashion statement. He also thinks Honey Boo Boo will make a fine wife some day.

Detroit Police are hoping you can avoid the obvious jokes here and instead focus on the crime in which a man stole a ceramic pig and then had his picture taken with it.

Because that’s what smart criminals do.

The owners of Red Smoke Barbeque restaurant in Detroit’s Greektown say a man stole their pig statue from the restaurant on Sunday.

The man apparently paid his bill using a credit card and then picked up the ceramic statue and simply walked out.

Witnesses say the man then went into an elevator with a woman who asked him what he was carrying. 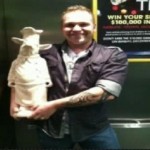 The woman asked if she could take a picture of him and the pig.

The man agreed to the photo not knowing the woman was friends with an employee at the restaurant and the mystery of the stolen pig was born.

The pig was given to the restaurant’s owner, Tasso Teftsis, as a gift from an employee a couple of years ago for his 50th birthday.

“I guess I should have glued it down, if I thought somebody was going to take it,” Teftsis said. “I don’t know where he got it from but it was like wherever he got it he knew it was the perfect present for me.”

The pig weighs about 30lbs and the suspect is still at large. But, while his eventual capture is inevitable, some criminals can’t wait that long. Police in Gelndora California are telling the funny story about the nice man who robbed a WalMart and then called the cops because someone stole his car.

A suspected thief called even more attention to himself after trying to rip off a Glendora Walmart store.

On Monday, Cloyde Pulmones thought he had Walmart scammed. Officials said a surveillance video showed the 32-year-old Corona resident grab a $300 computer, then head straight to the register and show a receipt.

“He had an old receipt that he had and went into the store and alleged that the computer that he had with him was actually purchased that day with an old receipt,” said Lt. Tim Staab of the Glendora Police Department.

The clerk allowed the man to leave. The suspect left holding his new computer in one hand and his old receipt in the other hand. He headed straight for his car to get away, but his car wasn’t there.

“We received a call from a repo company. Unbeknownst to the suspect, a repo company had been following him all during that day and when he parked it in that Walmart parking lot, his car actually got repossessed,” said Staab.

The suspect headed back into Walmart to report that his car had been stolen.

But Walmart security had been tracking Pulmones’ suspicious behavior and police were already on their way to arrest him for burglary.

“His middle name was probably ‘moron.’ Who in their right mind would do what he did?” said shopper Jeff Sanchez.

“What an idiot. I mean, if you’re going to steal something and then run out and call the cops on the fact that you got your car stolen, you deserve to go to jail twice,” said shopper Karen Vega.

Officials said Pulmones has a long criminal past, including several counts of burglary.

When police say someone has a “long criminal past” what they mean is “we catch this idiot every freaking time.” Seriously, if you keep getting caught shouldn’t it occur to you to try a different vocation?

But, if you can’t give up the thug life, you can at least be smart enough not to rob a place while driving around in a vehicle that serves as a rolling billboard with your name and phone number on it.

Well, you could be. Jeff Lewis Yancey could not.

A suspected tire thief in Temecula made it easy for investigators to track him down. His phone number was in plain sight while a tire store was robbed.

The recent burglary at the Best For Less Tire Pros took Riverside County Sheriff’s investigators less time to solve than most of their cases.

“If you are stealing something you don’t advertise who you are,” said the tire shop’s owner, Rich Richardson.

But that is exactly what the thief allegedly did. On January 17, Richardson discovered a break-in at his tire shop. Naturally he went to see if his surveillance cameras caught something, which they did.

“Once we got the cameras and looked through all the cameras, we found there was somebody out there taking tires. And then we noticed that as he drove by it had his name and phone number right on the side of the van,” said Richardson.

“Jeff Tires” was clearly painted across the van. That, along with a cell number, led police to Yancey Jeff Lewis. He also goes by the name of Jeff Lewis Yancey, a local tire salesman.

Investigators say he’s the one that is seen tossing tires into the back of his trailer while his accomplice acts as a lookout.

Investigators say they set up a sting operation by calling Lewis on his phone. When he allegedly tried to sell stolen tires to undercover officers, they moved in to arrest him.

Lewis has pleaded not guilty.

Meanwhile, Richardson says he is out about $800 since only one of the tires has been returned.

He’s not angry about it, but he is offering a bit of advice to the suspect.

“Stay out of Temecula because I think everybody’s got his phone number now,” said Richardson.

Temecula? Doesn’t that sound like a great name for some character in a horror movie?

And, as to Mr. Lewis, I’m sure he’ll be popular in prison. People that stupid get all sorts of respect from the inmates.

Or so I’ve heard.

But, well, the one thing none of these people have done is advertise their crimes. Why not? Because no one’s that stupid.

A Nebraska teen allegedly celebrated her bank robbery on YouTube, flashing money and what appears to be drugs in a video powered by Green Day music.

Hannah Sabata, 19, was arrested last week after she allegedly stole a car and held up a Waco bank, the York New-Times reports.

In the YouTube video, titled “Chick bank robber,” Sabata uses captions and a large notepad to gloat about stealing a “shiny new” Pontiac Grand Am. She states she robbed a bank “with a gun, a pillow case, and a note.”

Authorities say that Sabata entered the Cornerstone Bank in Waco on Nov. 29 and handed tellers a slip of paper that read, “You are being robbed! NO ALARMS OR LOCKS OR PHONES or INK BAGS! I have a loaded gun. You have 2 minutes,” NTV reports.

“I just stole a car and robbed a bank. Now I’m rich, I can pay off my college financial aid and tomorrow i’m going for a shopping spree. Bite me. I love GREENDAY!”

Sabata appears to be wearing the same clothes she wore during her alleged stick up, the New York Daily News reports.

“I told my mom today was the best day of my life,” she writes in the video. “She just thinks I met a new boy.”


In the clip, Sabata claims that she executed the heist because she is a “victim of the government.”

“The whole system is just a game,” she writes. “The government stole my baby … and they took him away before I could even take him home … and they charged me with child neglect … I may not be a mother anymore but I can still find purpose.”

The York County Sheriff’s Department announced that it recovered all but $30, USA Today reports.

Click here to see the video they are discussing. The production values are better than the ones you have in the video of your kid’s birthday party.

Maybe not as good as your wedding, but close.

Other stories claim she may have not been taking prescribed medications. I’m not a doctor but I have to admit that she appears to be very lucid in the video and certainly took the time to make sure every aspect was as professionally done as possible.

In other words I’m sure she’ll be fine.