You are here: Home / Let’s Play Dress Up
I live in a neighborhood that is populated by a Mexican midget. She is about 80 years old or so. Her favorite hobby in the whole wide world is to walk up to complete strangers and grab their butt. And she knows she can get away with it. After all, what are you going to do? Really Junior, you’re going to beat up an 80 year old midget? Can you imagine what your life in prison would be like? Because I can and that’s not the life for me. So I tolerate one of life’s little absurdities and get to enjoy sharing the story. I think that is also the basic motivation behind Felix Baumgartner’s plunge to certain death last Sunday. It wasn’t the science or the thrill or anything else. Just that he now has a story very few can share. Seriously, it’s him and his trainer, Joseph Kittinger, who jumped from 19 miles once. That’s a small club. But some great stories.

The whole thing seemed like sci-fi when it was happening. A guy, a suit and 24 miles of air. That usually requires someone to yell “Beam me up” or something similar. It does not become a Red Bull ad. And yet, that’s exactly what happened, absurd through it may seem.

And it was the sci-fi element to it all that continued to hog my attention. You see, as we were riveted to You Tube watching this unfold in as close to real time as possible, thousands of people were crammed into the Javits Center in New York trying to have sex with people dressed up like ….. well, like cartoon characters. Which was all well and good until one loser spoiled the party.

Sci-Fi Speed Dating was a hit for self-proclaimed geeks and nerds at New York Comic Con this year — 200 people signed up and got real fictional. But a love scandal ripped hearts in two during one of the sessions on Saturday, leaving lusty Princess Leias and sexy Superwomen without partners in crime fighting. 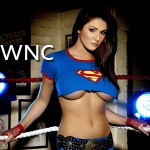 The molten hot asteroid of several women’s eye was a man dressed up as Bane, one of Batman’s arch enemies. Ladies who spoke to HuffPost Weird News said the man was a real charmer during the 2-hour quick-date fest, despite his character being a real nemesis.

But it turned out that Bane was a real life Two-Face.

“We found out he was married,” said a disheartened 22-year-old Jessie Sharcoff of New York. “We heard it through the grapevine.”

In Sci-Fi Speed Dating, nobody gives out their names. Instead they’re assigned a number — to avoid the occasional stalker — and at the end of dozens of rounds, each person writes down his or her favorite numbers. It’s all in hopes that someone they picked out wrote down their number, too.

But during one of Saturday’s sessions, married and monogamous Bane skewed the results — for Sharcoff, anyway.

Other participants, like Batman — also known as Kamel Nelson, 25 — had a blast talking with other like-minded fanboys and girls.

“It was a lot of fun, I’d definitely do it again,” Nelson said with a grin. “I met some that I liked, but they didn’t feel the same way. At least this time … I’ll go again.”

Ryan Glitch, the event’s founder and self-proclaimed Geek Doctor of Love, said that plenty of participants got second dates out of the deal.

How pathetic do you have to be to dress up in a costume so you can cheat on your wife? And does any wife really believe you when you say “Oh no honey, I’m not even going to look at those scantily clad Supergirls and stuff. I’m just going for the beer and the costume contest.”

I am glad everyone else had fun. It looked like a good time.

One guy who missed the speed dating event still managed to grab a little fun on his own by becoming a ……. you saw this one coming didn’t you? ….. FRUIT NINJA!

Great costumes are part of the fun at New York Comic Con, but it looks like one guy actually found a practical application for his get-up.

Keith Lytle is an Apple store genius by day, but his Comic Con alter ego is a more-than-decent looking Wolverine. Although his claws are plastic, Lytle found at least one situation where they came in handy: dicing up virtual melons in a motion-sensor enabled version of Fruit Ninja.

In this video taken at the Javits Center on Thursday, Lytle slices his way through about a minute of fun. If his shadow on the screen can be believed, the claws seem to give him a little extra reach. 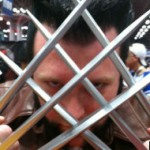 While he probably wouldn’t be able to use them in competition at the Fruit Ninja championship in Australia, at New York Comic Con, it’s a totally appropriate cosplay.

Several motion sensor games were prominently displayed on the convention floor at New York Comic Con, so chances are Lytle got to test his mettle again.

While cosplay is an important part of the Comic Con experience, people who take their alter egos into the outside world tend to get in trouble with the law.
Earlier this month, a Michigan man who dressed up as Batman was arrested for obstructing a police investigation. And in July, a Pennsylvania man claiming to be a “real-life super hero” was arrested after agitating patrons in the parking lot of a Home Depot.

Here’s some good advice. Unless you really are a billionaire who trained at the feet of Ra’s al Ghul it’s best to leave the fantasy life indoors. You can end up doing more harm than good. Also, just FYI, those latex costumes can be just as much to take off someone as they are to put on. Keep it in mind as you keep it indoors.

Otherwise, your bad decision making skills will lead you to Denamrk to enter the World’s Smallest Penis Contest.

It’s the little things that matter.

At least that’s the case in a Denmark-based competition that is offering an iPhone to the man with the smallest penis.

The contest is sponsored by erotica website Singlesex.dk, and site owner Morten Fabricius admits the idea is “weird and funny and almost too much.”

“It’s a competition which is at the core of manhood, the most important thing for a man,” he said, according to RawStory.com. “There are so many unhappy men out there, who think you have to have a giant penis, but it’s not normal to have a huge one.”

Contestants are asked to send a photo to the website of their erect sex organ with measuring tape next to it.

The man with the smallest penis will win an iPhone, as will another fellow who will be chosen by the site’s female, er, members. Guys who come in second and third place will get an iPad.

The small penis contest has only been going on a short time, but the site has already received a half dozen photos that Fabricius said are being “vetted” to ensure they haven’t been stolen.

As much as he sees the humor of the contest, Fabricius insists there’s a serious side as well: The competition exposes a problem that rarely sees the light of day.

Entries for the smallest penis contest will be accepted through Jan. 31, and sex experts believe it may have some positive benefits.

Sex educator Jamye Waxman believes that it’s good to get small penises out in the open.

“The average penis is 5.5 inches and all of the guys who are below average will see that they’re not alone,” she told The Huffington Post. “It’s a good opportunity for guys to accept what they’ve got.”

Lora Somoza, a sex columnist for L.A. Weekly and The Huffington Post, agrees that being open about what you have is better than trying to “act cocky” or be in denial, but wonders if a competition is the way to go about it.

“I don’t know how it’s going to be helping people,” she told HuffPost. “Whoever enters must want an iPad really bad.”

But Sam Phillips, a former Penthouse Pet who now hosts “The Single Life,” a radio show on Sirius XM, believes the contest will not only benefit guys with cocktail-weenie-sized penises, but also women like her.

“I personally prefer smaller penises,” she told HuffPost. “I like the penis to hit my G-spot, not my cervix. These guys should be celebrated, not castrated.”

Phillips believes the men who enter the contest may not be expecting the swell of appreciation they will get for their miniature members.

“The guys will be surprised with the support they get from women,” she said. “Most of the time with size, it’s not about the penis, but the size of the vagina.”

Where else but here would that statement even come up?

Anyway, folks, a fantasy life is a wonderful thing. It can liven up those dark and lonely nights like nothing else on the planet. but, and this is important, you need to make sure the people around you are okay with that or they will put you in jail, which is not fun.