You are here: Home / Even Dumber When They’re Drunk
Those of you who know me know that I am a fan of the occasional frosty cold adult libation. And I’m not that picky about which occasion it is. I have celebrated toupees. every September 2 I, just like you – I’m sure, celebrate National Beheading Day. Is too a real holiday. Click the link if you don’t believe me. Anyway, I celebrate it. Simply put, I like beer. And I like to celebrate stuff. And, to be honest, it isn’t as though I’ve never made the odd minor judgmental error while imbibing. I have, you have, we all have. One minute you’re in Kansas waiting for a bus and the next you’re in Denver driving that bus. How you got from point A to point Z is a bit of a mystery but you are later informed that you were the “most together” so they gave you the keys. Sadly, that may have been a true statement given the people I was with at the time.

So, I’m sympathetic. To a point.

The story of Robert Hagerman does not invoke sympathy. Laughter? Yes. Pity? For his family, certainly. But sympathy? Not one jot. He tried to have his daughter arrested because she wouldn’t get him any more beer.

The man told authorities he needed a help with a domestic situation.

But deep down, all he apparently wanted was a beer.

Pinellas deputies said that late Thursday night they got a 911 call from Seminole resident Robert Hagerman, 56.

Hagerman said he needed help because his daughter was hitting him, throwing things and using drugs.

Deputies arrived shortly after 11 p.m. Father and daughter were both home. Hagerman, however, was “very intoxicated and uncooperative,” a report said.

Authorities quickly determined his story was a lie.

Hagerman’s daughter told deputies her dad called police because she wouldn’t buy him a beer. She used her cell phone to record his threats to make fake statements to the police and played the audio for authorities.

Hagerman was arrested on a charge of making a false report of a crime.

He was in the Pinellas County Jail on Friday afternoon in lieu of $150 bail.

But, for sheer ingenuity, I have to give a tip of the WNC cap to Morgan Frances Carle. She treated being busted for a DUI as a business opportunity (Mitt Romney would be so proud) and tried to smuggle 30 Xanax into jail.

Deputies busted Morgan Frances Carle, a South Gulf Cove woman, for DUI on Tuesday after they noticed her driving erratically in a Dodge truck, according to a news release from the Charlotte County Sheriff’s Office. 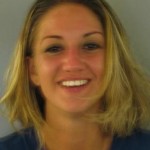 The deputy who had stopped Carle, 29, reportedly recognized her from previous encounters.

After all, she had previously been booked into the Charlotte County jail 18 times, records show.

Carle’s driver’s license had been suspended and she refused to do field sobriety exercises. So Carle was arrested and handcuffed — but refused to be searched at that time, according to the release.

At the jail, when Carle was asked if she had anything illegal on her, she said “no.” But since corrections deputies had found four pills in her front pocket, a strip search was conducted, the release stated.

Deputies then reportedly found 23 pills in her shorts, and while shaking out her shorts, two more pills fell out, for a total of 29 pills, which were identified as Xanax.

She also blew a .159 and .155 on her breath test for alcohol, about twice the legal limit, deputies said.

Carle was charged with DUI, Introduction of Contraband into a County Jail, Possession of Xanax, Resisting an Officer, and Driving While License Suspended. She remains in jail on no bond as she was also in Violation of Probation for previous arrests.

Look how happy she is. Have you ever seen a perkier mug shot? She is truly a fine example of better living through chemistry. Or something. I wonder if she even knows she’s been arrested?

“Wow, what a cool apartment. I love the stainless steel toilet.”

But my all time hero today was introduced to me by a guy who calls himself DUI Attorney on the ever popular sports blogs. I will reserve comments until you’ve finished reading.

When officers pulled over 23-year-old Warren Thomas Michael Saturday night, they said he was glassy-eyed, slurring his words and holding a squirrel.

A witness driving on Highway 17 in Fleming Island, Florida, spotted Michael swerving in and out of lanes and called police, according to an arrest report.

When officers caught up to Michael, they noticed him drifting over the center line, crashing into a stopped vehicle head on and continuing on his way.

Officers pulled him over moments later. But when Michael opened his window to greet officers, he wasn’t holding his driver’s license and registration — he was holding a squirrel.

“Upon contact with the defendant, he immediately told me he had a squirrel eating him,” the arresting officer said in a report.

When Michael pointed out the small squirrel wrapped under his shirt, officers said they smelled the strong odor of alcohol. According to the arrest report, he couldn’t divide his attention between looking for the items requested by officers and answering questions about his name and birth date.

“I had the defendant secure the squirrel and then exit the vehicle,” the report states.

After putting Michael through several field sobriety tests, officers charged him with driving a vehicle under the influence of alcoholic beverages and/or a controlled substance.

Michael was transported to the Clay County Jail. His vehicle and squirrel were released to his girlfriend, who arrived on scene to berate him for his actions shortly after the stop, according to the arrest report.

It was not clear if the squirrel was alive or deceased.

Let’s pull this one apart a little, shall we?