You are here: Home / Yoda’s Hurling Again
“Dude you wrote that funny thing about stuff. You know, Star Wars and Star Trek and stuff? Could you find it again please?” Well, yes I did and yes I can. And since it rounds out the previous two blogs nicely I’m tossing it back up. This originally appeared on January 8, 2011.

There has always been a clearly defined line between Start Trek fans and Star Wars fans. Star Trek’s are the more cerebral of the two. Fans not only follow the shows, they learn new languages, discuss how Paul Dirac’s theories on anti-matter, when coupled with Einstein’s theory of relativity, could truly lend credence to the argument for faster than light travel and often will worry about the socio-economic impact that one culture could have upon another. It is not uncommon to find Star Trek fans knocking back a couple of frosty cold adult libations over a game of 3D Chess all while contemplating the vagaries of nonlinear quantum mechanics and noting that Lt. Uhura was seriously hot. This hotness has been noted in the re-imagination of the character as well.

Star Wars fans, on the other hand, really just like toys.

Despite the promise of the 1st and 2nd (now 4th and 5th?) movies in the series, since George Lucas took over the directing and casting, Star Wars has been about a whole lot of nothing. Nothing coupled with amazing special effects, I’ll grant, but still a vacuous endeavor.

Oh, sure, every now and then some fan trots out a bunch of meaningless tripe about “The Force;” a ‘religion’ based on a philosophy that was founded by a hunch. You may as well just read The Secret and then remove yourself from society since you’ll be officially worthless.

So I guess it should come as no surprise that Star Wars fans are all atwitter about a couple who pose everywhere, ala The Residents (although I guarantee they have no idea who The Residents are), in Storm Trooper masks.

Bonnie Niess from AOL News takes a look at the trivial lives of Red and Jonny.

If you don’t believe Red and Jonny when they describe themselves as “Star Wars geeks,” take a look at their Flickr stream, where the couple photographs themselves wearing Stormtrooper helmets in a slew of situations from the banal to outlandish. It’ll probably change your mind.

The photo series began on their honeymoon, when the couple found a Stormtrooper helmet at a toy show. “I got Red to put it on and started taking photos of her in it immediately,” says Jonny. “We just started taking it everywhere, chronicling our marriage taking photos of ourselves wearing it, coming home and laughing our heads off.”

They began posting the images to show friends and family their adventures, but soon found Internet fame, as their Flickr page hit Boing Boing, Digg and Reddit. People even started recognizing the couple on their adventures. 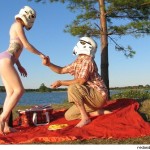 Keep reading to find out more and to see a selection of our favorite images of the couple in costume.

“People sometimes recognize us when we go to Comic-Con or Fanexpo and even toy shows,” says Jonny. “People actually call us out by name. We still get mail every day from someone who says they love us. It’s nice.”

As an unexpected bonus, all that public geekdom soon led to being interviewed by the official Star Wars magazine. “It is my proudest moment as a Star Wars geek,” says Jonny. “I am immortal now.”

The couple continue to post images of their adventures on Flickr and their website redandjonny. While still posing in the Stormtrooper outfits, they’ve recently been seen in giant mascot heads. Jonny says of his wife Red, “I love being married to the most beautiful, cool, amazing woman in the world. We love making each other laugh.”

We’ll look forward to more of your nerdy cosplay photo adventures, Red and Jonny. But sorry, folks — when it comes to leaving helmets on while knockin’ space boots, the couple reminds us they “are married” and “don’t need to wear protection.”

I do not want to go to my grave thinking about his unsheathed light saber plunging into a woman who has the body of a 12 year old boy. That’s just wrong. At every level.

Trust me on this one.

Nevertheless, since we are all about the children, I would be remiss if I didn’t post something that will help parents deal with the many problems they may face if their children become Star Wars fans. The nice people at Asylum (ED: now defunct) made a wonderful Public Service Announcement that should be must see TV for everyone who encounters this dilemma.