You are here: Home / It’s a Political PAR-TAY People!
Ever since King David sent Uriah to die in battle so he could bang his wife, politicians have had a difficult relationship with sex. One minute we’re lauding their skills blowing a sax and the next we’re scandalized by a stain caused by blowing instead of sex. These things happen. Thus it is no surprise that Wikipedia has been forced to dedicate a page to political sex scandals, as opposed to those caused by greed or stupidity. Here’s the list for the last two years.

I’d post more but we have a lot to get through today.

Well, bi-partisan canoodling may be the only thing both sides of the aisle have in common. And, let’s face it, you wouldn’t mind a bondage/tickle party every now and then. It beats the hell out of watching CNN.

The set of over 120 photos show three couples in various acts of congress in a hotel room. But the money shot, so to speak, is of five of the members posing for an awkward group picture, complete with double-fisted breast grope. Look at them. It’s like they’re a big happy, pervy family. (You can see more, very NSFW images from the collection here.) 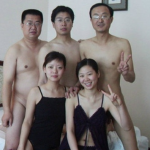 The photos initially surfaced last week with the mocking title “comrades in charge,” as two of the men were thought to be Wang Minsheing, head of the Communist Party in Lujiang county, in the eastern province of Anhui, and his second-in-command. Delighted/outraged Chinese netizens shared elaborate NSFW photoananalyses and various amusing memes like this Nike spoof and the one to the left that plays on claims the images were photoshopped.

The buzz grew to the point that the State Council Information Office, China’s head web censor, was forced to issue an official directive that “all websites must stop following and hyping the so-called ‘Lujiang Indecent Photos Incident.'” Currently the phrases “naked photos” and “vulgar photos” are banned from Weibo, which means Chinese netizens will sadly be missing out on Katie Perry’s epic accidental mooning.

But don’t take the swift and total crackdown on these photos as an admission of guilt! The Communist party has vigorously denied that these are their guys, even though they do share quite a resemblence, judging from pictures. At first they claimed the images were photoshopped, an old Anthony Weiner classic. But then they backtracked and said the pics were real but the Party officials had been misidentified, according to Offbeat China. Wang himself spoke up to clear his name, saying he was being “slandered,” possibly as payback over a corruption case he was investigating. The official line that emerged is that the photos were taken back in 2007 and feature random swingers. This digital forensics is an interesting role-reversal for the Communist Party, which is usually the one being exposed for Photoshopping.

Clearly the photos aren’t total fakes, as the third male participant, a poor guy named Wang Yu, has confessed. Wang does have a Communist party connection: He’s the Deputy Secretary of the Communist Youth League of Hefei University in Anhui. He was tracked down by the famous Chinese internet hordes known as “human flesh search engines,” who band together to identify internet villains, according to the Global Times. Now he’s been fired along with his wife, a middle school teacher who was also in the photos.

That the whole sex party scandal has unfolded while the wife of disgraced Communist official Bo Xilai is being tried for murdering a British expat underscores rising public disgust with corruption in the party. What better way is there to get back at your enemies than posting their n00dz to the web?

The links above are great. Make sure to allow yourself a few minutes to enjoy them.

Now, just so we’re clear, you are allowed to make fun of Wang Yu’s name, especially in light of the whole scandal.

Wow, babe, where did you learn that vibrating trick with your wanker?

The fun thing about the Chinese sex scandal, besides the fact that it shows best of the communist group work ethic, is that it came to light at all. This is a country where entire families disappear without a trace. You would think that a couple of raunchy pics would have long ago been destroyed. If, as some contend, China is finally coming apart at the seams, then we should expect a lot more stuff like this.

And I fully expect American politicians to step up and prove that we are the best country in the world and our sex scandals are more scandalous than anyone elses.

Delirium from Luke Norby on Vimeo.