You are here: Home / Getting Trashed
You’ll be pleased to know that today’s blog has abso-freaking-lutely nothing to do with Randy Travis. Nor does it have anything to do with the sexy denizens of WalMart. In fact, as much as it pains me to say it, this blog doesn’t even have anything to do with Russian hotties racing in the spiked heels for a gift certificate. And, while we are most certainly going to be discussing trash, we are not going to mention my white trash hero, Harvey Whetstone. We aren’t even gong to discuss Tom Haupert’s condiment jar. And that’s even though it contains the image of Jerry Garcia. I guess Jesus was busy. You can see where you might need a break from the whole holy visage thing. And, yes, Tom smokes pot and lives in Florida, but that doesn’t make his divine sighting any less relevant.

Nope, today we are going to talk about a few dudes who took the phrase “getting trashed” to epic new levels. First the story of Sidney da Cruz and Carlos Pereira who tried to break out of prison disguised as Hefty bags.

Two prisoners who attemped to escape a Brazilian jail disguised as garbage have had their attempts trashed before their eyes.

Sidney da Cruz, 24, and Carlos Pereira, 19, allegedly tried to escape the Delegacia de Furtos jail in Curitiba, Brazil, last Tuesday, in hopes of being taken out of the prison with the real garbage, the Brazilian newspaper Noticias de Navarra reported.

The duo are accused of waiting until the lunchtime trash was collected. They then climbed into the plastic trash bags and somehow put themselves next to the other bags, The Daily Mail reported. 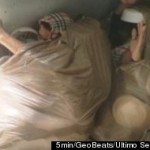 Something was clearly not right when prison guard Cleverson Mineiro noted that two of the bags were “breathing.”

“I was walking past the sacks of rubbish and I noticed something moving,” he told Record TV, a Brazilian TV network. “At first I thought there was a rat.”

Authorities are still trying to figure out how the two suspects tied the trash bags while inside them, EliteDaily.com reports.

Da Cruz and Pereira were arrested and may have additional prison time added to their sentences.

Gerson Alves Machado said this attempt may be novel, but escape attempts are nothing new as the Delegacia de Furtos jail is very overcrowded.

An investigation is underway to see if a third party, possibly a jail guard, was involved, according to Noticias Terra.

Darn breathing! Why does it always have to get in the way? Also, if you’re going to hide under the trash it is a pretty good idea, as evidenced from the arrest photo above, to actually get under it.

In our best use of the phrase “unintentionally trashed” I give you Justin Gilpatrick. He followed one bad idea with another so quickly as to almost be impressive.

After a night out at a Portland, Oregon bar on Thursday, the 27-year-old made the wise decision not to drive home drunk.

Less wise, however, was the choice to curl up in a recycling dumpster to sleep off the booze.

Waste Management crews emptied the contents of the dumpster– including Gilpatrick –into a compactor truck at around 1 a.m. on Friday, KGW reports. The truck driver drove for about a quarter of a mile and compacted his load twice before hearing Gilpatrick’s terrified screams.

Gilpatrick survived largely because the truck was relatively empty, according to the New York Daily News. Had there been more recyclables in the compactor, the drunkard’s prospects would have been grim.

The shaken Gilpatrick was taken to the hospital for minor injuries.

“This is… a well-trained driver doing his job,” Lang told KVAL. “He heard something unusual and immediately pulled over and shut down all of the moving parts in the truck.”

Gilpatrick, for his part, does not plan to make this mistake again. “I have not had a drink in years,” he writes in a Facebook post quoted by the Daily Mail, “and the one time I do this I [sic] what happens. I will never drink again.”

Good for you Justin. And Big Ups to the Waste Management driver. It’s good to know that someone pays attention to those training seminars.

So, folks, as you can see, hiding in garbage bins is NOT a good way to spend your time. If you want to get trashed have the common decency to fall asleep naked on top of a police car like everyone else.

Listen to Bill McCormick on WBIG (FOX! Sports) every Friday around 9:10 AM
and then collect all the podcasts at Podbean!.