You are here: Home / Death Bots for Everyone!
You know the drill. One minute you’re thinking about taking your special someone to the movies or on a picnic and the next thing you know death bots have destroyed your city. It’s become such a common occurrence that it doesn’t even make the news any more. Kind of like serial killers with the middle name Wayne. One minute you’re pretty sure there was a Castelnuovo in Tuscany and the next thing you know it’s a hole in the ground. And you’re pretty sure that Bruce Springsteen sang about the joys of life in Asbury Park but that seems to have fallen off the map as well. And, true, while our impending robot overlords are practicing by wiping out small civilizations they have also been perfecting the sex bots they will use to keep us focused on anything but what they are doing, so we have that to look forward to.

Keep in mind that we live in a world where a babysitting robot was named Kilbot and no one had any problems with it.

“Not tonight dear, we still need his spleen to pay the cable bill.”

So it is with no small amount of trepidation that I popped the link to my friend Chayse Love’s blog on designer death bots. She even provided a link to Randy Nelson’s article which explains how you too can own a death bot.

Climbing inside of a giant humanoid robot and piloting it is a staple of Japanese cartoons, but has always been something you could only watch characters do on-screen while you imagined yourself into their shoes — until now. A team of hobbyists, skilled engineers, and robot-lovers in Japan have finally created an honest-to-goodness mech you can actually drive.

Called the Kuratas, the human-controlled robot was created by a group calling itself Suidobashi Heavy Industry lead by Kogoro Kurata, an ironworker and artist. Standing more than 12 feet tall and weighing 9,920 pounds, the Kuratas was unveiled over the weekend at Wonder Fest 2012, an annual hobby convention in Tokyo, Japan, where it was — unsurprisingly — the hit of the show.

The Kuratas features a humanoid upper body and four insect-like legs with wheels. It’s designed to seat one person in its “chest,” which pivots above a waist and has one fully-articulated arm on either side. Pressing a button on the front of the robot opens the driver compartment canopy, allowing you to climb inside its cramped interior. Once inside, the canopy closes and you’re presented with a large LCD display and an array of lighted indicators. 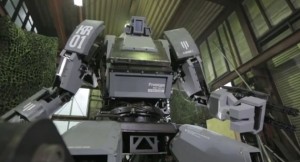 Controlling the robot is handheld through a custom control stick that’s part steering wheel, part puppetry rig. It can be turned to pivot the bot’s waist and steer it when moving — the Kuratas has a top speed of six miles per hour — while a pair of joysticks operates the arms. Twisting and bending these sticks allows you to control the arms similar to how puppeteers move the elaborate animatronics used in movies. It’s also possible to control the robot’s movements using an app installed on an iPhone.

In addition to its literal pair of arms, the Kuratas is armed with a multi-rocket launcher and two Gattling cannons. The former fires plastic rockets filled with compressed water, while the latter can shoot a terrifying 6,000 plastic BBs per minute when you smile. As inexplicable as it may seem, the robot is fitted with an Xbox Kinect sensor in order to pick up your gestures and facial expressions, including the one needed to unleash what its creators have dubbed the “smile shot.”

The Kuratas might have robot fans grinning, but you’ll probably be grimacing when you learn that owning your own, while possible, starts at a whopping $1.35 million. Suidobashi Heavy Industry has set up a web page where you can customize your own Kuratas prior to purchase, including paint schemes, upholstery options, and other options. No word on how much they charge for shipping.

We live in a world where really scary people turn Super Soakers into shot guns. How hard do you think it will be to weaponize that rocket launcher and Gattling cannons?

If you guessed anything longer than a day you have not been paying attention.

Seriously, giving people the ability to play Voltron in real life is not as good an idea as it might seem after a bottle of tequila. And of course I knew there was a family friendly nude scene in that cartoon link (around 1:25). You expect me to know stuff like that.