“My wife is banging younger guys for fun and profit, film at 11!”

No offense Egypt but Oy Vey.

In related news, as in how can people be this dumb, Swedish men are thrilled to catch Chlamydia. Ah yes, the land of death metal and yodeling adds a new chapter of civic embarrassment.

It’s no secret that Swedes are known not only for their promiscuity, but for being rather on the kinky side. Their flagrant aversion to condom use is leading to such a high rate of chlamydia that the country even celebrates a National Chlamydia Day as a means to educate their sexually active citizens about how to avoid the disease. Although the day has brought attention to the issue, it still hasn’t stopped the warped, irresponsible perceptions of STDs and safe sex in the country. A survey of men and women between the ages of 16 and 30 even found that Swedish men saw the contraction of chlamydia as some sort of badge of manhood. I wish I were kidding.

Just FYI, less than 3% of Swedish men believe in using condoms. Which means your Swedish Bikini Team fantasies ought to come with a warning label and some pills.

Anyway in other unusual uses for sex, police in Canada tried to use Ron Jeremy as bait in a animal abuse sting. Which will now make the first time I am really glad a sting didn’t work out since the guy they were after has turned out to be a serial killer.

The actor, who has appeared in more than 2,000 adult films in a career spanning nearly 40 years, told the Canadian Press that he was asked to participate in the sting by members of Rescue Ink, an animal rights group, and former Playboy playmates Sia and Shane Barbi, also known as the Barbi Twins.

The proposal came in January, 2011, before Magnotta became a murder suspect. At the time, animal rights groups were after Magnotta because he had allegedly killed kittens and posted videos of the deeds on the Internet — accusations he has denied.

Once Magnotta showed up on set, the activists would apprehend him.

Although Jeremy has spoken out about animal rights, he thought there were flaws with the plan.

“It’s like an episode from some TV show. The [guy] comes to the set with lube in one hand and his schmeckle in the other thinking he has a job, and the cops tackle him to the ground,” he told the Canadian newspaper The National Post. “That’s good for the movies. That doesn’t work in real life.”

Jeremy, 59, was unaware until recently that Magnotta had become a murder suspect.

Well, thank God those kitten rumors are false. If he’s only eating people we have nothing to worry about.

People who think like that will toss 140lb men at 600lb women and claim it’s a weight loss plan.

According to Pauline Potter, no relation to Harry, that’s exactly what it is. And, BO-NUS, it’s working.

In an interview with the UK’s Closer magazine, Potter described how her reignited sex life with ex-husband Alex has helped her lose 98 pounds.

“I can’t move much in bed, but I burn 500 calories a session –- it’s great exercise just jiggling around,” Potter told Closer. Potter, who had been consuming 10,000 calories a day, hopes to reach her goal weight of 532 pounds with the help of Alex. The two have sex up to seven times each day.

She makes sure to have some fun, too.

“We love foreplay and massages and, as well as full sex, I pleasure Alex, too,” she told the magazine. “My bed is strengthened and, although I can’t buy sexy lingerie, I drape a nice sheet over me.”

After meeting online in 2002, the couple married in 2005 and, when Potter failed to bond with Alex’s son, the two split up three years later. The break-up triggered Potter’s weight gain. She began consuming copious amounts of high-calorie foods and packed on the pounds.

With all the extra weight on her, Potter became depressed. She contacted the Guinness Book of World Records in hopes that winning the title of “World’s Heaviest Woman” would shame her into losing weight.

When Alex got wind of the publicity surrounding Potter, he decided to visit her and the flame was quickly rekindled.

“Within the first day of being back together we had sex six times in 24 hours,” Alex told the Sun last November. “Even though one of Pauline’s legs weighs more than I do, we’re able to position her body to make sex enjoyable for both of us.”

Alex, who weighs just 140 pounds, does most of the work in the bedroom.

“It’s really dangerous for us to have sex because at any moment the bed could collapse and one or both of us could be seriously injured or even killed from the impact,” he told the Sun. 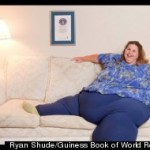 But using sex for weight loss is not an unheard of activity.

“Shagging can make you slimmer, if you do enough of it,” Dr. Yvonne Kristin Fulbright, a sex educator, relationship expert, columnist and founder of Sexuality Source Inc., wrote for Fox News in 2008. “It can also help the two of you fall for each other all over again. Requiring no monthly fee — dress code optional – you can ‘sexercise’ yourself into shape. This is one gym membership you’ll never want to drop.”

Dr. Fulbright, who has contributed to The Huffington Post and who earned her Ph.D. in International Community Health Studies at New York University, also writes that a good “sexercise” routine can not only lead to weight loss, but also to improved blood flow, strengthening of the heart, better cholesterol, better sleep, more energy, improved muscle tone and decreased stressed.

While Potter’s sex life is speeding at full-throttle, she’s also reined in her eating habits. She no longer eats 10,000 calories per day, though she still enjoys the occasional Big Mac.

Thanks to the Times of India (really?) I now know every possible benefit of sexercising. I still don’t want to think of her while I’m doing it. Of course, that may just be me.

So there you have it, sex for health is good, sex as bait is bad. Sex with a partner is good, sex on the internet in a country where that carries the death penalty is bad.

Now let the first one of us who hasn’t had a night like Devendra Banhart cast the first stone.

You are the one (feat. Devendra Banhart) from Adanowsky on Vimeo.