You are here: Home / Banging, Boozing and Burgering
It’s 200 degrees in the shade. Your sweat is sweating. Parts of your anatomy are improperly lubricated it’s so damn hot. All you want to do is lay naked under a cool fountain and tell the world to go hump an asteroid or something. Well, as long as you’re down there and already naked you may as well have some hot sex, cold beer and a fatty burger. Come on, admit it, you know your doctor has warned you that you were going to have a heart attack anyway, you may as well have it on your terms. Besides, as you will see today, all of this is for your own good. How good? Well, look at it this way, that smoking hot babe who wants to do the seventeen naughty things with you, that you think may be illegal in your state, might be the best thing to ever happen to your emotional stability.

Megan Holohan says that science has proved that hot sex can lead to lasting love.

And you all know I love science.

Questions about sexual desire and love have plagued humans for eons. While poets, musicians, and artists believe love lives in the heart, scientists know it exists in the brain. And sex? Apparently, that urge resides in the “little brain” or the bed or maybe a barn. It gets a little confusing what with those tired old adages about cows and free milk (or pigs and free sausage).

Now a new study has found that the same regions of the brain that control love also control sex — indicating that sexual desire can actually morph into love. That’s right. If a woman has sex with a man, he might not only buy the cow but love the cow, as well.

“Love and sex are clearly overlapping and they are different,” says Jim Pfaus, a professor of psychology at Concordia University in Montreal who’s been studying love and libidos for more than a decade. “You can have desire for sex without love.”

But sex can also be the start of a beautiful relationship.

How does all of this work?

The brain’s insular cortex (or insula) and the striatum play a role in both sexual desire and love. The insula is nestled deep within the cerebral cortex and influences emotions. While the striatum resides in the forebrain and receives messages from the cortex.

In order to map out the location of sexual desire and love, researchers reviewed 20 studies that used fMRI technology. First, they looked at the regions of the brain that lit up when sparked by love. They then compared the findings of all the papers to see what regions were activated when someone felt aroused or amorous.

“You don’t make a connection that love is a drug; it acts just like drug addiction,” says Pfaus. “Anyone who has had someone break up with them feels like a drug addict in withdrawal. You end up getting cravings.”

But it doesn’t stop there. The researchers also saw an overlap between sexual desire and love in the insula.

“[The insula] translates emotional feelings into meaning,” explains Pfaus. “You take the internal state and give it external meaning.”

The areas of overlap indicate that sexual desire transitions into love in many cases, and the feelings aren’t separate.

“Even love at first sight, can it happen? Of course it can happen,” says Pfaus. “And when it does happen, do you want to play Scrabble with each other? When it happens, you normally want to consummate it.”

There you have it folks, go ahead and put out on first date. It could be the gateway to eternal bliss. And, if not, at least you still got laid.

Now, onto another problem. Officials in Texas have banned canned alcohol on the rivers. All for a good cause but, since this is Texas, elucidated so poorly that people are literally standing in stores scratching their guns.

When it comes to new laws, Texas usually saves its bewilderment for ones from Washington. But this scorching summer, it’s a single city ordinance on the popular Guadalupe River that is stirring frustration and confusion.

So, just to clear things up: Boozing while tubing is still legal.

Drinking beer while lazily floating through New Braunfels is a heat-beating tradition for hundreds of thousands of vacationers each summer, but turnout is down and businesses say the reason is clear: a new ban on disposable containers that has heightened tension between businesses reliant on tourism dollars and residents weary of rowdy partygoers who leave behind truckloads of trash.

The so-called can ban doesn’t prohibit alcohol, but that message hasn’t been sticking.

In a May 28, 2012 photo, a sign informs Memorial Day visitors to Prince Solms Park in New Braunfels,Texas, what is acceptable for tubers to carry down the Comal river.

Beer and liquor are still allowed on the river if poured into reusable containers, and neon plastic Chug-a-Mugs that hold up to three beers are now ubiquitous. But while the New Braunfels Convention and Visitors Bureau has yet to release figures, director Judy Young concedes that business has been slower since the ban.

It doesn’t take data to see the effects. At one Rockin’ R store this week, Ross Purdy stared quizzically at a cold six-pack of Miller Lite in one hand and a $20 empty plastic “Bubba Keg” in the other.

“So will all this fit in here? Is this what we’re supposed to use?” Purdy, 40, said aloud to himself, before again scanning the store coolers for his options.

After a few seconds of uncertainty, he gave up and went to the cash register for help.

“No one understands it,” the cashier said glumly.

Local businesses hope that a new city marketing campaign will clarify the ordinance, although it will barely stem their indignation. Fifty-eight percent of New Braunfels voters approved the can ban, not swayed by hotel owners and river outfitters who warned that a can ban would sock the local economy.

Prevailing instead was a campaign that on its face was about curbing litter and environmental stewardship of the Guadalupe and Comal rivers. But motivating a not insignificant bloc of the city’s 58,000 residents was an appetite to clamp down on what many saw as an alcohol-fueled floating frat party with public nudity, sex, fights and loud music.

Finishing a can of Bud Light in a parking lot before heading into the water where it’s verboten, Dana Austin said that at 24, he doesn’t mind the rowdiness. But he said he supports the law’s environmental aims after years of watching tubers chuck cans into the river and along the banks.
“You’d see a frat boy floating up a little bit ahead of you, and they’d sort of do a free throw into the woods,” Austin said.

The Guadalupe and Comal rivers are among the state’s most visited natural attractions, and tubing is the bedrock of local tourism that pumps $469 million each year into the New Braunfels economy, according to Young. But the last three years have been a bumpy ride: Massive flooding in 2010 demolished buildings and buses of river outfitters, and last year’s historic Texas drought left tubers scraping against rocks in shallow water.

As far as trash and rowdiness go, can ban backers are already claiming victory. City data show that 1,800 pounds of litter was collected in and around the river in May — about 15 percent of the amount that had to be cleaned up in May last year.

Other unruly behavior also seems to be on the downturn. New Braunfels police Capt. Michael Penshorn said that on a recent June weekend, police patrolling the river issued 26 citations and arrested four people on charges ranging from minors in possession to public intoxication. On the same weekend last year, police wrote 42 citations and made 17 arrests.

Mike Kubelka, 50, patted his wet bathing suit with a towel before driving back to College Station with his two kids after they practically had the whole Guadelupe to themselves on a slow Monday. Now that he’s a parent, Kubelka said, he doesn’t mind seeing less beer on the river.

“But,” he said, “it gets kind of long out there with nothing to drink.”

Really? Legislating morality in Texas? That seems so “Blue State” of them.

Nevertheless ladies, as you can see, less beer equals a collapsing economy. So, when you’re headed over for that first night of unbridled (or, who knows, maybe you like bridles) fornication, bring beer.

And since you’re planning on burning a lot of calories – science says that good sex burns the same amount of calories as a five mile run, who knew you could run five miles in a minute? – you may as well bring food. And not just any food, we’re talking Giganto Burgers.

Americans love burgers so much that chefs are doing everything they can to make their creations stand out, with surprising toppings like pastrami, smoked mayo and pulled pork.

A pioneer when it comes to meat-on-meat burgers, Cleveland-based superstar chef Michael Symon runs B Spot, where offerings include the Porky, a beef burger topped with pulled pork, coleslaw, barbecue sauce and bacon. While the burger joint has a casual vibe, Symon’s standards remain as high as ever in the kitchens. 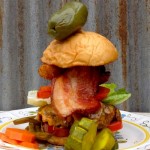 “We have a truck bring in Pat LaFrieda meat from New York four times a week, because no one here can supply that kind of quality,” says Symon. “We cook 1,000 burgers a day and take the temperature in every single one.”

“Top Chef All-Stars” winner Richard Blais became famous for using high-tech cooking techniques on the show, and the Atlanta chef applies those skills to his menu at Flip Burger Boutique. “I’m a burger guy,” says Blais, but his versions are unusual. He smokes mayonnaise to mix into the Steak Tartare Burger, a raw patty combining hand-chopped beef tenderloin, garlic, chiles, capers, cornichons and pickled shallots — all topped with a fried egg. Blais even practices molecular gastronomy at Flip’s liquid-nitrogen-milk-shake bar, creating over-the-top flavors like the Krispy Kreme shake, made with glazed doughnuts.

At Smoke in Dallas, chef-owner Tim Byres (Food & Wine People’s Best New Chef 2012) doesn’t use any gadgets. But he does rely on an in-kitchen wood grill and smoke pit for smoking and curing almost every item on the menu. Thick house-smoked bacon tops his EB&D Loaded Up & Truckin’ Burger, along with a soft-cooked egg fritter and smoked sharp cheddar. It’s served on a homemade honey roll.

The trend of classically trained chefs reinventing America’s quintessential comfort food may be traced to New York City in 2001, when Daniel Boulud combined French and American influences for the Original db Burger at db Bistro Moderne. The now-famous and still popular $32 ground prime rib burger is stuffed with braised short ribs, foie gras and truffles and delivered on a homemade Parmesan bun.

Here’s a slideshow of 20 or so monster burgers to give you some ideas.

So there you have it, you can beat the heat, make your soul happy and forget about your cares just by having random sex, cold beer and an unhealthy burgers.

Who says you couldn’t learn something from the Internet?

The Burger Girl – Slut Machine from Cool Cat on Vimeo.