You are here: Home / BOOBS!
Ever since Ogg saw Ook silhouetted by the evening sun men have been slaves to boobs. It doesn’t matter whose they are either; “Thanks there biker granny, you can roll those back up now.” We can’t help it. Men are hard wired to stare at boobs. Not only is ogling good for our heart rate (click the previous link to find out why) but boobs are fun to play with as well and everyone knows that play is the best thing for a happy soul. Even women will tell you they’d rather you play with their boobs instead of their heart since they have two of the former. However, as time progressed, “boobs” have come to take on other connotations. “He’s such a boob” is not a compliment. As noted in the History of Insults, the word has morphed through the years.

But 1900 launched us into a new series of insult or derogatory terms as well as a new century. The word boob, as a derogatory term, first appeared in 1909. Derived from the much older word booby, coined around 1600, it means a “dull, heavy, stupid fellow,” or a “clown, a nincompoop.” Johnson, in his Life of Boswell, could say (1776): “We work with our heads, and make the boobies of Birmingham work for us with their hands.” Indeed, the origin of the concept of “booby prize” goes back to the 1820s, when booby also referred to the “last boy in a school class, the dunce.” From Charlotte Bronte (1849): “He was the booby of..grammar school” (the actual phrase booby-prize, however, didn’t appear until the 1880s).

By 1909, however, the “y” had dropped out of the word and we just had “boob.” It would not assume its sexual connotation for 40 years, and in 1909 either meant a “prison” or a “fool, simpleton.” Actually, the word “stir” also meant a prison (first attested in 1851) and so a person who went “stir-crazy” is someone who was driven to that state by the realities of prison life. The Saturday Evening Post had this in its March 7, 1909 edition: “I had to tell her the boob had gone for the day.” G. B. Shaw, in his 1930 work Apple Cart could say: “You gave it away, like the boobs you are, to the Pentland Fourth Syndicate.”*

[*As indicated above, it was not until 1949 that the word “boob” first appeared in its current sexual connotation. I love the initial attestation: “I felt her sloshy boobs joggling me but I was too intent on pursuing the ramifications of Coleridge’s amazing mind to let her vegetable appendages disturb me.“]

Obviously the author of that line did not like women.

Still, boobs are here to stay.

The recent decision of “Octomom” Nadya Suleman to release a solo sex video has aroused heated opinions from people who say her debut in adult films is a sign that she’s not a good mother.

Surprisingly, some of the criticism comes from Suleman’s new colleagues in the world of pornography. Actress Amber Peach thinks Suleman was a bad mother before she decided to undress for her film, “Octomom: Home Alone.”

“My question is, ‘What are those kids going to think of her when they get old enough to realize she had them with no way to take care of them either because she hoped to get a reality show or because she’s…crazy, or both?'”

Suleman is the mother of 14 children. She underwent in vitro fertilization to give birth to octuplets in 2009.

So it’s not just me that thinks this lady is four colors shy of a rainbow. That’s good to know. Someone needs to let her know she keeps making very bad life choices.

Speaking of bad life choices, a lady may go to prison because her dogs busted out of the booby hatch and caused a chicken to die of a heart attack …. again.

It’s understandable if Joy McDonald is dogged by fear these days: She faces possible jail time for the death of a chicken.

But McDonald didn’t kill the chicken. Supposedly, her two chihuahuas, Peaches and Domino, caused the hen to have a heart attack.

Until her untimely death on April 5, the hen belonged to McDonald’s neighbors, George and Nittaya Gamblin, who keep chickens as pets at their Missouri home east of Kansas City.

McDonald’s dogs are usually indoors, but George Gamblin said they got loose and were found inside his chicken coop.

“We’ve run them out of here before,” Gamblin told WDAF-TV, adding that his wife injured her knee chasing away the dogs that night.

McDonald, who is studying to become a veterinarian, believes the penned bird suffered a heart attack when the Chihuahuas barked at it while running loose in the rural neighborhood.

Now she’s charged with misdemeanor animal abuse. The court records say the dogs killed the chicken but don’t explain how. However, the evidence submitted for the case is brutal according to officials.

If McDonald’s convicted, she could be jailed in the county lockup for a year and fined up to $1,000.

The possibility of jail time for McDonald has generated a tremendous amount of interest in the case.

“I think this is asinine,” McDonald told the Kansas City Star. “I just can’t wrap my mind around it. All of this because of a dead chicken.”

At the time, she found it hard to stop from laughing when Gamblin called and allegedly screamed that her dogs literally scared his chicken to death.

But she took a more conciliatory tone when she spoke with KCTV-TV.

“It makes me feel like a horrible person. I just think this has blown way out of proportion. I said, ‘I was sorry.’ I tried paying for it. I built a dog pen,” she told the station.

“I don’t want to be paid for the chicken. I just want the dogs off my place and destroying our property,” Gamblin griped to WDAF-TV. “To me, the idea of respecting people’s property is lost in all this.”

Gamblin said that, previously, another dog owned by McDonald also killed some chickens.

Yes, you can laugh. God knows I am. First off, there’s a vet/farmer person named McDonald. Dear God does it get any more cliche than that? Then the killer dogs turn out to be Chihuahuas. And last but not least, they live 2 miles from the Bar-B-Q capital of America. I’m sure that chicken didn’t go to waste.

Okay. I’m better now. You just don’t get stories like that in civilized places.

All right, last but not least, let’s get on down to Australia where a nice lady robbed a gas station, partly using her boobs.

This might not be the breast way to get away with robbery.

Queensland cops in Australia are looking for the so-called “Buxom Bandit,” who robbed a Gold Coast gas station early this morning, according to a police news release. 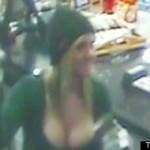 The blonde-haired woman wearing a low-cut top drove to the gas station with another man, according to the release. She then busted into the station, went behind the counter and threatened the clerk with a knife before making off with an unreported amount of cash, the release said.

News Nine MSN notes that the woman, who is still at large, made a couple of crucial errors that could help police track her down.

She failed to wear anything that disguised her face, which was captured on the gas station’s surveillance camera.

The bandit also wore a fingerprint concealing glove on her knife-wielding hand, using her un-gloved digits to grab the cash and potentially leave other prints behind, MSN reports.

Australia’s Triple M Radio DJ Mick Molloy spoke out in support of the well-endowed robber. If she’s caught, Molloy promised to show up to her trial chanting, “free the Gold Coast two!”

You and I both know that twenty men have called the police saying “I don’t know the face but that rack belongs to ….”