You are here: Home / Thankfully There’s Nothing Offensive Here Today
Some days you just stare at the news and wonder what the hell people are thinking. From Michael James Lee running around waving a gun at people so that he could save a beach to the ingenious Marsha Usher who called 911 to find a spot to pee in the woods, it seems like there’s no end to the stupid train that keeps whizzing (if you’ll pardon the expression) by. In fact the United States government, responding to the fears of some really dump people, wasted all of June 1st trying to convince people there are no such things as zombies. I can easily imagine the operators at the Center for Disease Control (the poor saps who actually have to deal with this) just snapping and saying “Look, buddy, I’m sorry you’re a moron. Go get a 4th grade education and try again. I am telling you there are no such things as ****ing zombies!”

All of this is why anyone driving past the CDC offices in Atlanta yesterday saw thousands of real scientists drinking corn liquor and giving up. There’ not much else to do when, after all their hard work, Bangor Maine held Preparedness Training Seminar on how to deal with a Zombie Apocalypse.

Yeah Bangoirans, those are your tax dollars hard at work.

Grab your zombie bullets and your running shoes, the undead have reached Maine!

Just days after the federal government denied the existence of zombies, the city of Bangor took the zombie apocalypse craze to a whole new level. Officials began “preparing” for the undead by running a daylong pandemic exercise Thursday that was really a lesson in city response, the Bangor Daily News reported.

But there were zombies.

About 100 emergency responders from eight Maine counties tried responding to a weird scenario: Zombies originated in Jamaica and started biting people, and the outbreak reached Maine.

Those who were “bit” during the exercise had stickers put on their name tags, labeling them as infected. They’d either have to get the anti-zombie vaccine — which stops the virus from getting to the brain and killing, then reanimating — or become one of the walking dead themselves.

And while the locals were playing flesh-eater, first responders were training to deal with mass casualties, MPBN reported.

“This gives us the opportunity to do something a little bit different, but it still has the same principles that would apply in a real situation,” Kathy Knight, director of the Northeastern Maine Regional Resource Center, told the paper. “[Emergency workers] need to figure out what they need, how they’re going to respond and how they are going to share their resources to respond to the disaster. They need to know who to go to outside their community to find the resources they don’t have, so it’s a different twist.”

Using zombie-ism as a metaphor for infectious disease has been, my apologies for this, done to death. It was funny the first time. Cute the second. A giant waste of time and money now.

But, just for the heck of it, let’s say you want to be a zombie but you are a person of refined tastes, as it were. What then? Is there any way to retain good table manners while eating the brains of your victims? Thanks to Stefanos, he’s too cool for two names, the answer is yes. He recently sold his family’s collection of silverware …. which was designed for eating people.

It’s not every day that you come across a utensil made for eating a person — even for an oddities shop owner.

But when the folks who run Loved To Death, a San Francisco curio shop — specializing in medical and biological oddities, historical curiosities, and taxidermy dioramas — met Stefanos, a spiritual teacher who came in the store with an honest-to-goodness cannibal fork, they had to bite.

“This is just some of the stuff my family had laying around, but I don’t eat people so it just doesn’t seem like something I want to have,” Stefanos explained.

The fork is nearly a foot long and comes from the Fiji Islands, whose natives have been known to engage in cannibalism from time to time over the centuries, according to salesperson Wednesday Mourning, who, along with Loved To Death owner Audra Kunkle, stars on “Oddities San Francisco,” debuting June 23 on the Science Channel.

“Someone would come and kill someone from [one] tribe and [the other] would go and retaliate and kill and eat the other person,” Mourning said. “It’s kind of like a trade of souls and flesh.”

Stefanos chewed on this for a moment before spitting out: “It’s not something I ever used it for.”

Mourning said that while cannibalism was popular in certain tribes across history, human flesh isn’t the healthiest food one can eat.

Kunkle was hungry for a different kind of knowledge: Figuring out why Stefanos’ parents gave him the cannibal fork in the first place.

“Well, it may sound a little odd, but I actually do drink human blood,” he said. “I do enjoy the taste and the texture.”

Blood, like flesh, can be bloody awful for one’s diet, Mourning said.

“Ingesting too much blood can be toxic because it’s very rich, and humans have problems excreting excess iron that can lead to a liver swelling disease called hemochromotosis,” she explained.

At the moment, Stefanos was more interested in green money than red blood so he sold the cannibal fork to Kunkle for $150, and some might say he made a real killing

Well, eating people and drinking their blood may be bad ideas but they aren’t the worst we have today.

Nope, that honor goes to the idiot Raelians who are holding a national day of festivals to honor the swastika.

As symbols that represent the worst of humanity go, the Nazi swastika is hard to beat, but members of a UFO group want everyone to look past the dark history.

Before Adolf Hitler’s Nazis embraced it, making it the ultimate symbol of hatred, the swastika for thousands of years appeared on Hindu and Buddhist temples, in Native American artwork and even in Jewish synagogues in Israel.

Now, a UFO enthusiast group known as the Raelians wants to return the swastika to its original meaning, which in Sanskrit literally means “to be good.” The Raelians have declared June 23 “World Swastika Rehabilitation Day,” and members plan demonstrations worldwide, including Los Angeles, Chicago, Vancouver, Miami, Houston and New York. The goal is to show that the swastika originally had nothing to do with the Nazis or the Holocaust.

It’s the third annual swastika rehab day, and no more than a few dozen attendees are expected at each event. However, spokesman Thomas Kaenzig is hoping Buddhists, Hindus and other spiritual groups using the swastika will show up to demonstrate their support. Other cities with demonstrations include Melbourne and Sydney, Australia, Mexico City and Tel Aviv, Israel.

Along with booths filled with explanations and flyers, some supporters will roll around inside a giant transparent ball featuring different types of swastikas. Planes with banners equating swastikas with peace and love will fly over the New York and Los Angeles rallies.

To many, the Raelians are best known for the international stir they caused back in 2002, when they claimed they had cloned a human baby, which was never confirmed. The group’s theory of creation, far different from that of any mainstream religion, is that humans were created by advanced scientists known as the Elohim, symbolized by the swastika. 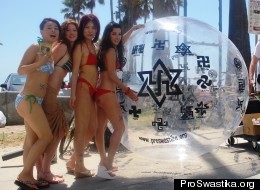 “The swastika is one of the best traces left by those who created us, and the attempt to bury it as a symbol of violence and hatred only gives credit to the horrible Nazi ideology,” Kaenzig told The Huffington Post. “Some people associate the swastika with something negative, but you don’t stop using the cross just because of the Ku Klux Klan.”

At the turn of the 20th century, Americans used the swastikas on postcards to express congratulations, said Kaenzig. They have also symbolized good luck, harmony and well-being at different times.

Scott Selby, author of the forthcoming “The Axmann Conspiracy: The Nazi Plan for a Fourth Reich and How the U.S. Army Defeated It” (Penguin) agrees that swastikas’ original meaning has been abused, but he’s against trying to rehabilitate its image.

“Some things are so debased that they can’t be redeemed,” Selby told The Huffington Post.

Selby, who is also a trademark attorney, said that a comparison can be made between what the Raelians are proposing and African-Americans taking back the “N-word,” but only to a point.

“The use of the ‘N-word’ in that community has been very controversial,” he pointed out. “In this case, if a group of Holocaust survivors decided to take back the swastika, it would be wrong. In the case of these people, it’s offensive and wrong.

Menachem Wecker, who blogs about art and religion for the Houston Chronicle, understands why the event may cause a furor.

“The swastika has longstanding meaning as a symbol of peace, and nothing the Nazis did can change that,” Wecker told The Huffington Post by email. “The reality is, however, that it also carries Nazi baggage now, and anyone who thinks they’re going to ‘take it back’ or ‘own it’ by holding some kind of public forum without offending a lot of people is deeply mistaken.

“Regardless how careful and intellectually honest the hosts of a ‘Swastika Rehabilitation Day’ are, it’s very hard to imagine that not offending a lot of people.”

Really? The image rehab of the swastika is being handled by Raelians? What could possibly go wrong?

The Raëlian Movement teaches that life on Earth was scientifically created by a species of extraterrestrials, which they call the Elohim. Members of this species appeared human and when having personal contacts with the descendants of the humans they made, they were mistaken for angels, cherubim or gods. Raëlians believe messengers, or prophets, of the Elohim include Buddha, Jesus, and others who informed humans of each era. The founder of Raëlism, members claim, received the final message of the Elohim and that its purpose is to pacify and inform the world about Elohim and that if humans become peaceful enough, they wish to be welcomed by them.

Well, who better to not offend millions of people than a group who don’t believe that humans are capable of creating anything?

I mean besides like damn near anyone else that is.

You know what, I think the zombies are an upgrade over the Raelians.