You are here: Home / Giving People Nightmares
Some day, hopefully in my lifetime, someone can logically explain to me why people are afraid of two people who love each other. You can’t keep busting out the “sanctity of heterosexual unions” when that puts you squarely in the Kim Kardashian camp. Which is like a prison camp for idiots with nice throw pillows. And you certainly can’t bust out the Jesus card. He hung out with twelve sailors and a hooker and wisely kept His mouth shut on this subject. He was anti-divorce, this is true, but that was about all he had to say. Listening to the xenophobic fear mongerers in North Carolina justify their ban on gay marriage sounds a lot like listening to the Klan explain why black people shouldn’t ride the bus. Albeit with a weaker grasp of linguistic skills. They can pass all the idiotic laws they want. At some point an ancient truism will prove out; love will truly conquer all. And what will Jesus do when that day comes? I’m thinking He’ll host a nice fish dinner with a light wine.

It has to disturb the sleep of the rational to know that there are people that narrow minded walking upright and demanding to run the world.

In Texas, another enlightened state, lawmakers want the public to know that it’s perfectly okay to kill a Sasquatch. You remember them, the nice creatures beloved by Native Americans as being protectors of the ancient soil and all that crap. It seems they taste just like chicken.

Or they would if they existed.

We don’t know if Bigfoot actually exists, but if you have one in your sights, you can pull the trigger — at least if you’re in Texas.

Some places like Skamania County, Washington, have outlawed the killing of a Sasquatch, according to The UnMuseum.com, but Texas apparently has no such decree preventing the hairy creature from being hunted.

The matter came up recently when Oregon-based Bigfoot buff John Lloyd Scharf contacted Texas Parks and Wildlife officials David Sinclair to see if he might have a fighting chance of hunting a Sasquatch without getting busted.

Turns out the way the law is written suggests it’s OK to turn Bigfoot into the biggest trophy that ever hung above a fireplace, according to Fox News.

One key question is whether the legendary monster can be considered exotic under the terms of the law.

“An exotic animal is an animal that is non-indigenous to Texas,” Sinclair told the network. “Unless the exotic is an endangered species, then exotics may be hunted on private property with landowner consent.”

Scharf interpreted this to mean that if the Bigfoot lives in Texas, it can be killed.

“We’ve got hundreds of sightings going back decades. I don’t think we’d have any problem proving it’s indigenous,” he told Fox News.

But having the right to kill something and actually doing it are two different things and some researchers like Craig Woolheater, who runs Cryptomundo, a website dedicated to cryptozoology, admit they’d have trouble pulling the trigger if they ran into a Bigfoot.

“I could never shoot one,” he told the Ft. Worth Star-Telegram. “But Bigfoot is like Tony Romo. Either you love him or you hate him. With Bigfoot, either you want to protect him or you want one as a specimen.”

Some clarifications are in order; Cryptozoologists are people who study animals that don’t exist. Texans are people who would Bar-B-Q a relative if they had the chance. This is not a good combination.

Speaking of people who eat other people, former politician Hans Ulrich Rudel has been busting out the Swiss equivalent of a Craig’s List ad looking for people to eat his buddy’s wife and daughter.

Hans Ulrich Rudel, a Swiss politician and convicted murderer, is now accused of putting out an ad to attract potential cannibals interested in eating his pal’s wife and 12-year-old daughter.

The Local reports that Rudel, who co-founded the Embrachertal branch of the Conservative Party, is accused of putting the ad out in 2010 in an effort to get his friend’s wife “out of the way” during an ugly divorce.

The ad said the mother and daughter were “keen to meet gentlemen interested in slaughter and dolce who would like to roast us on a spit.” “Dolce,” as Rudel allegedly told police, was his word for cannibalism.

The Daily Mail reports that Rudel received dozens of responses to the ad, but the person he replied to turned out to be an undercover cop.

“There are a lot of cannibals out there,” he said before being sentenced, according to the Mail.

Rudel’s trial comes almost exactly one year after The Local previously reported on another Swiss man involved in a cannibal conundrum.

This time, it was a Swiss man who agreed to be eaten by a Slovak cannibal, but the man changed his mind before he could be consumed.

I love that description, “Swiss politician and convicted murderer.” That has got to look so cool on his resume. And you just know that he’s exactly the kind of guy who hires Dominic Deville on a regular basis.

Our, new best, buddy Dom is a professional child stalker.

Attention parents: Just in case your children don’t have anything to talk about in therapy, here’s something you might want to consider:

Dominic Deville rents himself out as an “evil birthday clown” who leaves scary notes for your children, warning them that they’re being watched and that they’ll soon be attacked. 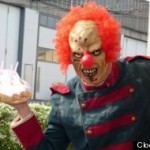 At the end of a terrifying week, your child will indeed be attacked. Deville, wearing a freaky clown mask, will smash a cake into your child’s face, Metro reported.

Deville is capitalizing on what has become a mainstay for all circus-going kids: the fear of clowns. You may think Stephen King’s “It” was scary, but Deville will keep you shaking in your big, red floppy shoes.

Throughout the week leading up to the child’s birthday, “The child feels more and more that it is being pursued,” Deville told Metro. “The clown’s one and only aim is to smash a cake into the face of his victim, when they least expect it, during the course of seven days.”

Deville harasses his targets with texts, phone calls and letters to let them know that their time is coming, according to the Herald Sun.

Of course, since the creepy stunt is “all in fun,” Deville promises to back off if he’s asked to by parents.

“If at any point the kids get scared or their parents are concerned we stop right there,” he said. “But most kids absolutely love being scared senseless.”

Deville, a Swiss actor working in Lucerne, told Orange News that he got the idea from watching his favorite horror movies.

Don’t confuse Dominic with our local hero, Happy Dave. Dave is strictly an “adults only” kind of stalker.

Not that he won’t cause a nightmare or two anyway. But at least it’s not going to send your kids to therapy for the next 30 years.