You are here: Home / Oooo, You Animal
There is a poet who calls himself “the sexy beast.” I bring this up not to share his overwrought ramblings but to show you how much research I do each day before I serve up this blog. My robots bring me a summary of headlines and I whittle those into a theme and then I go and see if there is anything related to that theme to add in. Sometimes there is, sometimes there isn’t. Then, and only then, do I actually start writing. Whenever possible I try and add in something from my life if for no other reason than to prove I’ve had one.

When I was growing up my grandparents ran a kennel. Great Danes and German Shepherds at first and then, after Granny got injured, Yorkshire Terriers and Pomeranians. She and Grandpa were very good at what they did and several of their dogs won major awards in various AKC certified shows. People flew in from as far away as Aruba to get pups when they were available. I remember a couple from Spain who were so excited to get a pup they forgot to bring a translator. They spoke no English. The husband was an ambassador or something like that. Never one to let a silly little thing like a possible international incident slow her down, my grandmother used pictures, cups of coffee and home made prune slices to make everyone feel at home and then they went down stairs to the kennels, picked out a puppy and then the man copied the numbers from the bill onto a check and handed it to her. I have no idea if he had a clue how much money that was since the Pesata was depressed at the time. But the check cleared and, a couple of weeks later, my grandparents got a lovely thank you letter from the Spanish Consulate. It seems they’d named the dog, a miniature Yorkie, Toro.

People interact with animals in many different ways. Some good, some bad and some just gloriously bizarre. The latter is best exemplified by the family who dressed their one year old son as a zebra and then took him to play with the predators at the Oregon Zoo.

Where a lion immediately tried to eat him.

There was just one problem — the black and white striped “zebra” was actually a one-year old boy named Jack, who was visiting the zoo with his family. Despite the mix-up, the African lioness, who is affectionately named Kya, tried her best to push her way through the thick glass wall that separated the two so she could wrap her large jaws around little Jack’s head.

The entire incident, which occured on April 26, was captured on video and uploaded to the Internet. The video has since gone viral. Jack was seemingly unfazed by the ordeal and his family can be heard laughing in the background. At one point his mother, Heather Baltzor, encouraged him to say, “hi kitty, kitty” to Kya the lion.

Baltzor discussed the unique interaction with The Huffington Post today.

“It was Jack’s first trip to the zoo. We didn’t even realize he looked like a zebra until we got home but a lot of the animals in the zoo — the crocodiles and the jaguars — apparently did. They would come up to the glass and look at him.”

While many of the other animals were attracted to Jack, it was Kya who gave him the most attention.

“We were not worried. We thought it was hilarious,” Baltzor said.

“Here’s Jack being sniffed by Jaguars, here he is being chased by gators and, gosh this is so cute, here he is being attacked by a lion. Now that we know the costume works we’re going to take him to Wild Animal Park where they don’t have those silly cages.”

Of course, zoos in general are odd. There is just something about animal butts and people that causes strange behavior. Whether it be gluing one’s self to a rhino’s posterior or spending the day licking a monkey’s butt, people just get some very unusual ideas at the zoo.

You’ve kissed butt at work, but this zoo keeper took the metaphorical act to a whole new (and literal) level.

Chinese zookeeper Zhang Bangsheng, 50, reportedly did the unthinkable when a leaf monkey in his care couldn’t pass a peanut: he licked its butt for “over an hour” to encourage it to defecate, China Smack reported, citing the Wuhan Evening.

Bangsheng claims the monkey was too small for medication to help it pass the peanut, so licking was the only way to help it — after washing its bottom with warm water, Orange News reported.

Some news outlets are questioning the authenticity of the story — and why Bangsheng used his mouth rather than the more traditional method: a warm cloth.

It’s China. They won’t waste money on an expensive cloth when they have cheap labor to do the job just as well.

Just a little south of the butt licking Chinese, a Japanese police officer was stunned to have a lost parrot give him its address.

Police near Tokyo were stumped about how to go about finding the home of a lost parakeet—until the bird opened his mouth and told them his address, reports AFP. Turns out the owner had lost a previous parakeet because it flew away, so she made a point to teach the new one their numbered street address. Piko-chan is now home safe and sound.

Not to be confused with Pikachu, who is also cute and yellow but can’t talk.

Of course, animal names have long been a subject that perplexes rational people. I know an English Wolfhound named “Fluffy,” for example. so it should come as no surprise that a cop hating goat in Norway is named Jesus.

Having a horned goat butt you in the behind would make anyone cross — even if the goat is named Jesus.

So it’s no surprise that Jesus’ owner, Norwegian farmer Tor Brede Launes, decided to make the goat pay for his sins after he chased a mother and child up a tree last Saturday evening before turning his sights — and his horns — on a police officer, according to Norwegian website TheLocal.

The animal attack took place on a small island off the south coast of Norway when Jesus “got gruff” with a mother and her child who climbed up a tree while cops were called to the scene, the website reported.

Cops arrived, but Jesus, a 176-pound billy goat, charged straight at one of the constables.

“It was really angry,” police officer Borge Steinsland told FVN.no. “They were quite simply forced to use pepper spray to drive the wild animal away.”

The incident obviously got the goat of Jesus’ owner, who decided that the animal was going to be meeting his maker on a fiery grill.

Amazingly, the goat must have suspected something because he soon went on the lam, forcing Launes to travel around the island crying out for Jesus.

But it turns out Jesus may not have to die for his sins, according to The Local.

“I deserve at least that for him,” the farmer told FVN, adding that he would also help catch the goat to hand him over to any prospective buyer.

Ironically, Launes may lose a goat, but gain a girl. It seems one woman thought his post was a personal ad.

“I found that quite charming, so I’m going to follow it up a bit. If I end up getting a farm lady into the bargain, I’d have to say I’m reasonably well satisfied with Jesus,” he told broadcaster NRK.

Proving the Lord does indeed provideth.

She saw an ad for a lost, psychotic, goat and thought it was a single’s ad? Is she from Florida?

Maybe, maybe not, but this next guy sure is. A drunk driver, with a monkey as his co-pilot, was, believe it or not, arrested.

A Florida man is charged with felony drunken driving and wildlife violations after police discovered a small monkey in his truck.

Officers noticed a “small monkey” in Kotelman’s truck and released the primate to his friend.

After Kotelman was released on bond from the DUI charge, Florida Fish and Wildlife Conservation Commission officers charged him with possession of wildlife and two counts of violating fish and wildlife rules. They took custody of the monkey.

Really? This guy got bonded out? Well, in a state where shooting people is a misdemeanor I guess I can see that.

BTW, thanks to our regular reader DUI_Attorney for forwarding that gem.

This just in, Wisconsin wildlife officials are evicting the Loch Ness Monster from the Chippewa River. Since the monster is just a sculpture and someone sent an anonymous email promising to remove it, local businesses are vying to see if they can get it. It is a pretty cool sculpture, it’s just in a really bad place.

Like the kind of place that could cause serious boating accidents.

I can’t leave you on a downer. So, let’s head out to Washingoton State where they have a new program for prisoners; Felines for Felons.

A prison in Washington State has begun testing out a new program, “Cuddly Catz,” matching inmates with cats who have been rescued from shelters.

The Associated Press reports that inmate Joey Contreras, 28, was transferred from a 40 man dorm into a two-person cell in March. But it’s the cell’s third occupant, “Princess Natalie,” who has made the biggest difference in his daily routine. 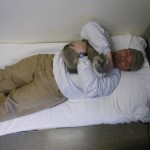 “Nobody was wanting to adopt her,” Contreras said. “We got her and it’s been awesome ever since.”

Princess Natalie was living in a shelter and scheduled to be put down before she was adopted out to the fledgling program. Like many of her new neighbors, Princess Natalie struggled with social norms: biting and hissing and nearly anyone who came across her path.

Of course, the rescue cats aren’t being paired with just anyone. Contreras is being held at the minimum security Larch Correctional Facility and already demonstrated a pre-determined period of good behavior before being given the opportunity to pair with the six-year-old cat. And if the prisoners don’t continue to stay in line, they will lose their cat privileges and be returned to the general prison population.

The reported goal of the program is to give the prisoners some positive responsibility that will hopefully help transition them during their eventual integration back civil society.

“In prison, they tend to think about No. 1,” prison counselor Monique Camacho said. “Now they have to look out, care for and have responsibility for something else.”

Oh the crass jokes I could insert here.

But, all in all, I think this is a great idea. Cats are easier to care for than dogs, purring has been shown to lower blood pressure by as much as 20% and giving inmates a chance to focus on forward thinking concepts such as caring for others can only reap benefits. Kudos to the Washington State Correctional System.