You are here: Home / Nude Texas Ugly Bacon Vibrators
Yeah, I just used the generated tags to come up with a title today. First off, Big Ups to all my homies in The Ex Senators for the triumphant release of their cooler than hell video, Start a Fight. The fact that I co-produced it only shows that they have good taste as well as talent. The video even got a great review on the U.K.’s hippest e-Zine, Louder than War. That’s not to say everyone in the U.K. is all things wonderful. The people at the Daily Mail called an orphaned parrot the ugliest bird in the world. That’s just tacky. “Hey look, you were abandoned at birth AND you’re butt ugly!” is not a path to good self esteem. On the other hand, since the exact same thing happened to me, I can relate and am sure the little fellow will grow up and become all sorts of wonderful. Just like me.

Earlier this week I took an intellectually driven look at hookers, bacon and robots. It seems that I was having similar thoughts to Serena Dai at Huffington Post who spent the weekend coming up with the line “Bacon Gives Me a Lardon!”

No, I am not making that up.

We did not eat bacon in my house.

I know: It’s dreadful to think about. It wasn’t until the fifth grade at a friend’s sleepover when the magic happened. Her mom fried up turkey bacon, which I liken to a gateway drug of sorts. There was no turning back.

So to say I jumped at the opportunity to go to the third annual Chicago Baconfest would be a huge understatement. (Leapt? Cried for? Gave up my first-born?) My foodie partner-in-crime Ben and I hauled a camera, a notebook, and empty stomachs to UIC forum on Saturday evening. From candied bacon and bacon vodka to t-shirts with funny sayings like “Bacon Gives Me a Lardon,” Baconfest 2012 did not disappoint Chicago pork lovers.

If you click on her name it will take you to a bacon themed slide show that will keep you entertained for hours.

But, as it turns out, we are talking about the many fun things you can get in vending machines these days.

The National University of Singapore is home to one of the world’s most inviting Coke machines. The words “Hug Me,” written in signature Coca-Cola script, grace the giant red box, and when curious students wrap their arms around the cumbersome machine, it dispenses a free Coke — all in the name of making people smile.

They, too, have a fun slide show. The machine that vends live crabs even comes with a 3-1 replacement guarantee if you ever get a dead one.

That seems pretty sporting of them.

Also a sporting type is Melissa Borrett. The 26 year old former waitress decided to blend in nicely with her all hard core right wing neighbors by opening an all nude maid service. Business has been booming.

Lubbock police Sgt. Jonathan Stewart said the owner of Fantasy Maid Service of Lubbock doesn’t have a permit to operate a sexually oriented business and officers are watching for any violation, which would bring a $2,000 fine.

But owner Melissa Borrett insists she’s not operating such a business. Customers pay $100 an hour for one maid or $150 an hour for two maids, and no touching is allowed, she said.

“I run a maid service,” the 26-year-old entrepreneur said. “We really just clean houses. These girls are not performers. They’re maids.”

The West Texas native and mother said she started the business about a month ago because she was struggling as a waitress to make ends meet. She had even been living at the Occupy Lubbock encampment near Texas Tech University’s campus in Lubbock.

“I just decided to go a little bigger, work a little smarter,” she said.

Her business model isn’t unique, but the city’s ordinance requires all sexually oriented businesses to apply for a permit, which costs $650 a year, and to post a $5,000 surety bond or letter of credit.

Such businesses are defined as any commercial venture whose operations include “providing, featuring or offering of employees or entertainment personnel who appear in a state of nudity, seminude or simulated nudity and provide live performances or entertainment” intended to sexually stimulate or gratify customers “and which is offered as a feature of a primary business activity of the venture.”

Stewart wouldn’t say how police planned to keep tabs on the maid service, and Borrett said she would hire an attorney to fight any attempt by the city to shut her down.

So far, Borrett said, business has been good and she is now busy interviewing to hire more maids. She currently has three on staff. She offers a regular discount to government employees and law enforcement, and an ad posted Friday on the online bartering site Craigslist offered 20 percent discounts for Easter weekend.

If requested, the maids would clean fully clothed, but the cost is the same.

“It is kind of pricey, but we’re fantasy maids,” Borrett said.

Texas is also the state with a “pole tax” on strippers which they use to provide medical assistance to women, as long as none of that assistance is related to procreation.

Far from sexy, vibrators pretty much resembled power tools when they were first introduced. Doesn’t this device look like it could strip the paint off a car? 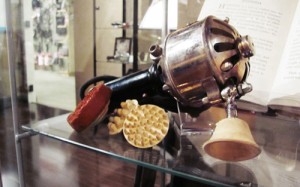 Hysterical: With a nod-and-a-wink, vibrators were originally marketed as “health and beauty” devices or “head massagers.” Those in-the-know interpreted their true purpose. At the 1900 Paris Expo, a dozen vibrators were first on display as sexual devices. Oh, those crazy French! 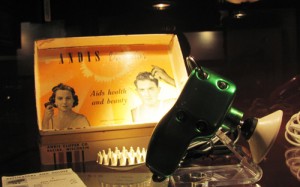 The nice ladies at COED have over 100 images of early vibrators for you to peruse.

It makes me wonder who needs a man any more?

Maybe these two young ladies. Well, they may be too young (except in Arkansas) to need a man, but clearly something is missing from their lives. Since we started this blog with one of the best videos out right now, it seems only fitting that we end it with one of the worst.