You are here: Home / Up With People
I love people. They do the funniest stuff and then are happy when I write about it. Seriously, my job often consists of waking up, having my coffee and then laughing my butt off. When I calm down I share with you. And only you. I don’t like that creepy dude back to the left. Just you. And, I know that you (and only you) really like when I talk about Florida – the state that makes your weird uncle Elroy look employable – and I can understand that. You also seem to enjoy the science stuff as long as I don’t get too carried away with it. You and I have agreed that I will avoid the political stuff as much as possible. That’s a dark place no one wants to visit. Still, that leaves me a lot of leeway when it comes to subjects. You and I have discussed the joys of sexbots, psychotic Nazis and aliens in the same article, BOOBS! and more. Much, much more.

And today will be no different. We’ll start our day with every young boy’s idea of the perfect pet. Nine pound Gambian rats that invaded Florida. Of course, you knew they would only invade Florida.

When it comes to giant rat infestations, New York gets all the attention.

But a breed of giant Gambian rats have been rapidly reproducing in the Florida Keys despite a decade-long effort to wipe them out. KeysNet reports the invasive African native species first began showing up between 1999-2001 after a local exotic animal breeder released eight of the rats into the wild.

“We thought we had them whipped as of 2009,” said Scott Hardin, exotic species coordinator for Florida’s Fish and Wildlife Conservation Commission. “We think they have not moved far but they clearly reproduced,” he said.

The rodents, officially known as the Gambian pouched rat, are the largest known breed of rats in the world. They can grow up to three feet in length and weigh as much as nine pounds. Wildlife officials fear that if the rodents make it to the Florida mainland, they could devastate local crops. 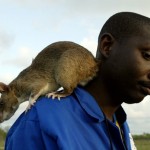 The U.S. Department of Agriculture has been working with Florida officials to wipe out the rodents, and there are only an estimated few dozen at large, but they can reproduce quickly and do so only five months after being born. After producing a litter, the Gambian rat only has to wait another nine months before having another litter, bearing up to six babies at a time.

Officials thought they had successfully gotten rid of all of the Gambian rats back in 2008, but several of the burrowing creatures recently began showing up in the yards of local residents. “We were skeptical but went back and talked to people and [saw] there were rats that we missed,” Hardin told KeysNet.

Using cantaloupe and peanut butter as bait, officials plan to distribute another 200 traps in an effort to clear the keys of the Gambian rats, some of which are larger than the average house cat.

“We’re going to try to trap at least that often until we see signs that we have knocked them back,” Hardin said.

Trap? Alive? To what end? Oh, yeah, this is Florida, they need more vermin.

Like the guy who got arrested for calling the cops. How does that work, you ask while laughing? Easy, call 911 to whine that she’s screwing up your “hands on breasts” viewing pleasure. That’s right, she interrupted his Facebook time and he called 911. Even in Florida that’ll get you arrested.

Of course not all morons live in Florida. God was kind enough to sprinkle them all over the world so everyone could enjoy one. For example, this nice Austrian man comes to mind. He got a job, he didn’t want a job so he sawed off his foot and cooked it.

In a desperate bid to keep collecting unemployment, an Austrian man reportedly sawed off his own foot — and then cooked it, just to be sure it couldn’t be reattached and foil his plan.

Just before he was due for a health check with jobs officials, Hans Url, 56, of Mitterlabill, held his leg to his circular saw and sliced off his foot at the ankle, the Daily Mail reported.

He then tossed his severed foot into an oven to prevent doctors from possibly reattaching in his bizarre bid to remain on unemployment.

“The planning was meticulous,” police spokesman Franz Fasching said. “He waited until his wife and his adult son had left the house and he was alone.”

After he hacked off the foot, a profusely bleeding Url was airlifted to a hospital in Graz and almost died en route, according to a hospital spokesman.

“The food was too badly burned to reattach. All we could do was seal the wound,” the spokesman told the Mail.

That might not help the 56-year-old stay out of work, though, according to a spokesman for the Austrian Public Employment Service’s local job center.

“Even now losing a foot does not automatically mean he will not be able to work,” the spokesman, Hermann Gossinger, said.

“We will see what work we can find for him,” Gossinger added. “This is a tragic case but it will not help the man.”

According to the Daily Mail, Url had been required to come in that day for a medical exam to prove he was not fit for work, after Public Employment Service officials had become suspicious of his claim of a bad back.

Way to go from “being committed” to “should be committed” in record time. This is exactly the kind of deadbeat that Fox News is always warning us about. Well, except for the fact that he’s white and has a sexy Austrian accent (just like Hitler did) and doesn’t wear a hoodie.

The whole “celebrity moms” who are rearing future serial killers is a blog for another day. Let’s just say that January Jones, Mayim Bialik or Alicia Silverstone should each have their children taken from them immediately.

Because, as every World News Center reader (and that means you) knows, it’s just a tiny step from being fed like a demented bird to dressing up like a ninja to steal pot.

A pot delivery man in southern California said two men dressed as ninjas ambushed him while he was making a delivery of doctor-prescribed cannabis to a patient Friday night.

The man, reportedly in his 40s, told West Covina police he dropped a bag of marijuana and cash, which the ninjas took.

Police said this is the first instance of a ninja-related crime in the area.

Let’s go through this step by step, shall we?

“A pot delivery man.” This is his job. He gets up in the morning, puts on a paper hat and gets in his pink and blue weedmobile and commences to avoid being unemployed.

Then he gets attacked by Ninjas.

Sure, and how many times did he use the word gnarly in his report to the police? And how do you call the insurance company and say “My weedmobile was attacked by Nijas and …”

That sound you hear is an insurance agent hanging up.