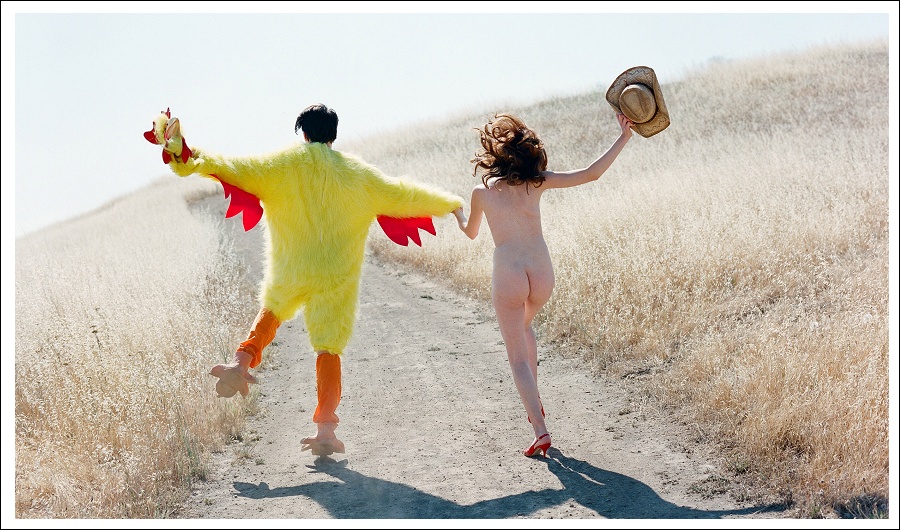 Love means different things to different people. The picture to the left is from an engagement ceremony. Because marriage is all about respect and maturity naturally she got naked while he wore a chicken suit. Their names are Heather and Scott. The cowboy hat was just a bonus. Since we just escaped Valentine’s Day and it’s too soon to start talking about World News Center’s favorite holiday, I thought it might be fun to take a look at the wonderful vows honorably entered into by some wonderful people in Jamaica.

18 people fired up some fatties and got married naked.

Nine tourist couples slathered on ample amounts of sunblock on Tuesday and said “I do” in the nude on a sun-baked Jamaican beach.

Getting married in the buff on Valentine’s Day meant living out a fantasy for Milly Salas, 39, a stay-at-home mom from Bergen County, N.J., who had never visited a nudist resort before.

“It was beautiful. It was like a fairy tale,” Salas said shortly after the nude nuptials at Hedonism II, a resort for the pleasure-seeking crowd in Negril, a western tourist town in this largely conservative, tourism-dependent island.

The promise of a Valentine’s Day wedding and complimentary four-night stay attracted over 100 engaged couples from the U.S. and Canada, but only 10 were chosen as part of a nude wedding contest, according to Zein Issa-Nakash, a marketing vice president of Superclubs, which owns Hedonism. One couple dropped out before the big day, which was filmed by a documentary TV crew.

Kevin Young, of Land O’ Lakes, Fla., said walking around au naturale is what he’s used to since he lives in a nudist community. Getting married without clothes was a no-brainer for Young and his new wife, Shannon Witherspoon. Even body paint was too much for him, he said.

“It was easy for us cause we’re used to it. But some of these other people had never been naked before outside their bedroom. I got to give them kudos, cause they really stepped up and did the full monte thing and got naked,” Young said during a phone call from Negril.

The Tuesday ceremony was the first nude wedding event at the Jamaican resort since 2003, according to Issa-Nakash. She said there were no angry protests of the event by pastors and others as there were about a decade ago when the resort first hosted group weddings in the buff.

Prime Minister Portia Simpson Miller’s government was quiet about the resumption of nude weddings at Hedonism this Valentine’s Day. During the controversy over nude weddings in 2001, Simpson Miller, then Jamaica’s tourism minister, said getting married without clothes was at odds with how Jamaica should be marketed.

During the past few decades, as tourism has boomed, Jamaicans have quietly endured visitors’ stereotypes of their country as a place to frolic on the beach and leave “civilization” behind. But there has always been a certain degree of tension between the island’s traditional West Indian society and a tourism industry marketed mainly on pleasure.

Just FYI, for those who are new to the world around them. The Rastafari Movement is a real religion and not just an excuse to smoke pot. Most of the natural born Jamaicans I have met hate tourists and the culture they bring

But if you must be married in the buff, there are some precautions you need to take. Rev. Dr. Bob Shore-Goss has the 411.

There are a few things that any couple should consider before even contemplating naturist wedding, holy union or vow renewal. First is the issue of dealing with non-naturist friends and family members. Like any other couple there will be certain people who are “a must” to invite to this special day, but if the couple are both naturists and have decided on having a naturist style ceremony, they better be ready for a couple of “No Shows”. Even if certain non-naturist family members and friends are given the option of wearing clothes at this kind venue, it may be unsettling due to others who choose to go nude. This could affect the outcome of their decision to decline such an invitation. There maybe some of us who are lucky enough to have the support of non-naturist family members and friends who would attend such as ceremony, but there are not a lot of us that do.

Typically, the most logical place to host a naturist style ceremony such as these is within the confinements of a naturist club, resort or on a naturist beach. Having such a location on the invitation could be good enough to receive many return rejections; which makes MCC in the Valley a much better choice for your special day.

Even after a naturist couple is finished with the stress of the mental conflicts with the planning and invitation issues, there may still be another issue with the couple itself. There is an honored tradition with weddings, holy unions and renewing of vows to which some of us are fixated on… the aspect of the beautiful “Wedding Dresses” and/or “Dashing Tuxedos”. The tradition of the wedding dress is embedded so deeply in the psyche of our modern society that the importance of wedding attire is sometimes the main focus of the ceremony.

Still in favor of saying “I do” in the buff ?, raise your hand…

Weddings are an expensive proposition for couples. Think of the things you won’t have to buy for your nude wedding:

And then consider the frustration you’ll save yourself.

All opposed to saying “I do” in the buff, raise your, errr, never mind…

While a nude wedding frees up the bank account and reduces time spent organizing clothes, it comes with a few challenges:

Excitement is harder to hide – please pardon the pun, but it’s true.

Lack of pockets. Make sure your ring bearer has something to carry the rings in or on.

I don’t know where to look. On the day of your event everyone will figure this out. We guarantee it.
Hidden costs of a naturist wedding

Just because you’re naked doesn’t mean you leave all the adornments at home and put your inner-hippy out there. This is a celebration of the naked body and your time to shine – literally and figuratively.

Naturist weddings are as much about the freedom of expression as they are about admiring the physical beauty of the naked body. If you’re not comfortable being naked in your own bedroom, then being naked in front of dozens of your friends and family might not be your best choice. But take heart, experience at naturist resorts has proven that there’s no such thing as a perfect body. Every shape and size of body is beautiful in its own way – and that in itself is freeing.