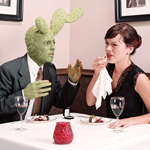 How was your weekend? Mine was pretty nice. I caught up on some stuff around mi casa, hung out with some buds, watched some baseball and greeted my new neighbors. They seemed nice and normal – husband, wife, 2 kids, mini van and so on – until I got back home. That’s when I discovered that they are members of that certain Satanic cult that believes in the power of wind chimes. These people, no matter how sweet they act, should – by law and on moral grounds – be shot. I can’t think of anything more annoying than the sound of dingling bells at 4 AM while I’m trying to sleep. If anyone ever does a study on it I’ll bet every serial killer known to man was exposed to wind chimes somewhere in his or her life. In fact, given the look of sleep deprivation on another neighbor’s face this morning, I’ll bet there’s one more in the making as I type. Clive Barker on a demented bender couldn’t match the horror of wind chimes.

Okay, sorry, but I really hate freaking wind chimes. Anyway, today, we’re going to talk about the joys of dating. As people throughout time have discovered dating is not an easy task. There are rituals to be performed, traditions honored and so on. You don’t get to jump from “I like your smile” straight into the horizontal mambo if you’re looking for a relationship. But some people seem to have problems dealing with other people and, therefore, resort to less conventional methods to satisfy their needs.

For example, the nice man in Palmetto, Florida – of course it was Florida, where else would something like this start? – who molested a vending machine found out that police, even in Florida, frown on that type of behavior.

Police in Florida said they arrested a man who “maliciously molested, opened, broke, injured, damaged and inserted his body parts” into a vending machine.

Officers said Aguiar then admitted to breaking into the vending machine and taking $10 worth of coins from it.

Aguiar was taken to the Manatee County Jail on a burglary charge and two violations of probation. He was ordered held without bail.

“Inserted his body parts.” That has to be the most polite way I’ve ever seen it described. Although how that earned him $10 in quarters is beyond me. Maybe the machine was impressed?

Oh well, at least his prey was upright. Cops in Hamilton, Ohio arrested a man, for the sixth time, for having sex with other people’s pool toys.

Police in Ohio said a man who was seen engaging in sexual activity with an inflatable swimming raft had previous arrests for public indecency.

Hamilton police said they arrested Edwin Charles Tobergta, 32, after a witness — the owner of the raft — reported he was engaging in sexual activity with the pink swimming accessory in the alley behind his home, the Hamilton Journal News reported Tuesday.

The owner told police the man was told to stop, but he fled with the raft.

Police said Tobergta, who was charged with public indecency, admitted to the act and told officers he needs help for his problem, police said.

The first step to recovery is admitting you have a problem. The second step should never involve other people’s pool toys. Just trust me on this.

But, my hero today, has taken the bad date concept to a whole new level. Sure, his issues involved humans, but that’s where rational thought died. Cops in Witchita, Kansas say you can’t make this stuff up.

Police in Kansas said a man was arrested on a charge of patronizing a prostitute after he called police to complain about an escort service.

Wichita police said they responded to a call from a hotel room shortly before 5:30 a.m. Wednesday. A 26-year-old man, whose name was not released, told them he placed an order with an online escort service and neither of the two women who showed up to his room were the woman he requested, The Wichita Eagle reported Friday.

The man said he paid the women $160 but soon changed his mind and asked for his money back. He called police when the women told him they don’t give refunds and left the hotel.

Police said they arrested the man after he explained the situation.

So this nice gentleman adds to the illustrious ranks of failed 911 calls. And, when you clik the link, you’ll note the lady in Florida is probably a saint down there. After all, where else would someone lock themselves INSIDE their car?

Yes, a WalMart was involved.