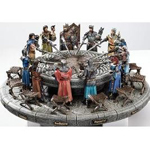 We love our legends. We wrap in mythos even the most mundane and trivial things. Something cannot just be, it must be larger, better, more than anything of its time. I think that explains why when researchers admitted they’d actually found Atlantis that people flocked away from the story. What fun is there knowing that Atlantis was just a kingdom in the south of Spain with a big army? Oh, sure, archaeologists are going to go nuts over this find for quite some time but Joe and Jane Sixpack are going to stick to their aliens or psychic friends or whatever. They find no romance in the truth.

Which is a pity.

But not all legends are lost in the mists of time. Some are appearing right before us. For example, bars in Michigan, upset over the smoking ban that is killing their businesses, are now banning politicians. That is legendary in a very cool way.

Or how about the memorial in Ohio that keeps getting vandalized? Police set up a stake out only to find out that all the little flags were being stolen by a squirrel. No arrests have been made as of this writing.

Obviously no article on legends would be worth reading without a glance over at a guy who accidentally got an air cannon stuck in his butt and it inflated him to near fatal proportions.

I have read the article twice and still have no clue how a large pipe, which is what an air cannon is, carrying 300lbs PSI of air ended up in his anus. But, if you’re going to go, that is certainly one legendary way to try and exit this mortal coil.

Of course, what article about legends would be complete without a look back at one of the most persistent legends of all, King Arthur. Most scientists contend that the story is mere allegory for a culmination of events and people. Others contend that it is completely fabricated as there is no evidence of any kind to support it. Certainly not current to the time.

Scientists in Scotland have finally been granted permission to conduct a noninvasive search of an area long associated with Arhturian lore. And, guess what? They found the freaking round table.

The King’s Knot, a geometrical earthwork in the former royal gardens below Stirling Castle, has been shrouded in mystery for hundreds of years.

Though the Knot as it appears today dates from the 1620s, its flat-topped central mound is thought to be much older.

Writers going back more than six centuries have linked the landmark to the legend of King Arthur.

Archaeologists from Glasgow University, working with the Stirling Local History Society and Stirling Field and Archaeological Society, conducted the first ever non-invasive survey of the site in May and June in a bid to uncover some of its secrets.

Their findings were show there was indeed a round feature on the site that pre-dates the visible earthworks.

Historian John Harrison, chair of the SLHS, who initiated the project, said: “Archaeologists using remote-sensing geophysics, have located remains of a circular ditch and other earth works beneath the King’s Knot.

“The finds show that the present mound was created on an older site and throws new light on a tradition that King Arthur’s Round Table was located in this vicinity.”

Stories have been told about the curious geometrical mound for hundreds of years — including that it was the Round Table where King Arthur gathered his knights.

Around 1375 the Scots poet John Barbour said that “the round table” was south of Stirling Castle, and in 1478 William of Worcester told how “King Arthur kept the Round Table at Stirling Castle”.

Sir David Lindsay, the 16th century Scottish writer, added to the legend in 1529 when he said that Stirling Castle was home of the “Chapell-royall, park, and Tabyll Round”.

It has also been suggested the site is partly Iron Age or medieval, or was used as a Roman fort.

Extensive work on the royal gardens was carried out in the early 17th century for Charles I, when the mound is thought to have taken its current form.

The first known record of the site being called the King’s Knot is from 1767, by which time it was being leased for pasture.

Locals refer to the grassy earthworks as the “cup and saucer”, but aerial photographs taken in 1980 showed three concentric ditches beneath and around the King’s Knot mound, suggesting an earthwork monument had preceded it.

The new survey — funded by Historic Scotland and Stirling City Heritage Trust — used the latest scientific techniques to showing lost structures and features up to a metre below the ground.

It also revealed a series of ditches south of the main mound, as well as remains of buildings, and more recent structures, including modern drains which appear at the northern end of the gardens.

Mr Harrison, who has studied the King’s Knot for 20 years, said: “It is a mystery which the documents cannot solve, but geophysics has given us new insights.

“Of course, we cannot say that King Arthur was there, but the feature which surrounds the core of the Knot could explain the stories and beliefs that people held.”

Archaeologist Stephen Digney, who coordinated the project, said: “The area around Stirling Castle holds some of the finest medieval landscapes in Europe.

“This investigation is an exciting first step in a serious effort to explore, explain and interpret them. The results so far suggest that Scotland’s monarchs integrated an ancient feature into their garden, something we know happened in other countries too.

“We are looking forward to the next stage in September when we hope to refine some of the details.”

Dr. Kirsty Owen, Cultural Heritage Adviser at Historic Scotland, added: “The project has the potential to add to our knowledge of the landscape context of the medieval and early modern occupation of Stirling Castle.

“The ditches identified may intriguingly be part of historically documented earlier garden features, or if prehistoric in origin could add to our scant knowledge of prehistoric activity at Stirling Castle.

“We look forward to seeing the results of the next phase of investigations.”Futher work including a ground-penetrating radar survey, is now planned to take place next month to find out more.

A small display of the interim results can be seen close to the site at the Smith Museum.

Like with the discovery of Atlantis, there has been no sign of magical or alien artifacts, just the kind of stuff that could have been built by people in the 6th century in England. But, even so, this is kind of cool.

The legend of King Arthur, his knights and the love of his life, Guinevere, has been handed down in one form or another for almost 1,600 years. I’m impressed if people pay attention to what I write for 16 minutes. Let’s face it, this story has staying power.

I don’t know when, or even if, they will be allowed to dig on the site or if technology is getting to the point they may not have to. But this is one story that I’ll be keeping an eye on. After all, what red blooded boy didn’t dream of saving a damsel in distress and then getting lots of rescue nooky as a prize?