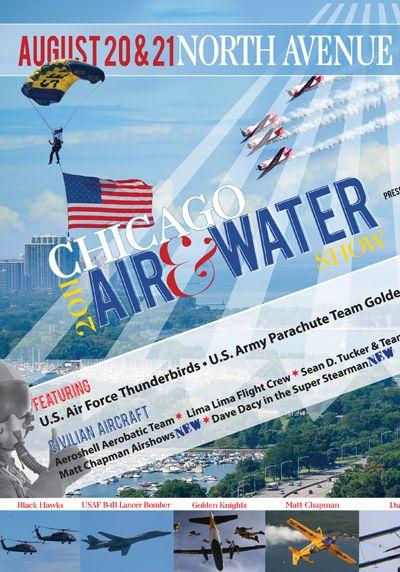 Have you considered joining the millions this year to watch the annual Chicago Air & Water Show….but then the idea of fighting crowds and the August heat changes your mind? Well, I have a few options for you to try instead. I scouted out several different locations during the Air & Water Show, and discovered that you don’t have to be stuck in a huge crowd to enjoy the festivities.

First, I stopped by the main viewing location, North Avenue Beach, where millions come to watch the show. There is grandstand seating available

at this location, otherwise you can make a “camp” in the sand. The best areas on the beach, however, are claimed pretty early– so you’ll have to make a day out of it to get a good spot. This location is great if you are OK with big crowds, and have planned on getting a lot of sun….otherwise, you might opt for something a little “cooler,” and perhaps an even better view.

If air conditioning is a requirement for you, then I’ve found the perfect venue to view the Chicago Air & Water Show from this year; The Willis

Tower!! Not only will you be on the 103rd floor for your viewing pleasures, this height will put you higher than most of the planes in the show. Not only that, but you’ll also be enjoying the show in a nice cool atmosphere. Plus! I didn’t find the Willis Tower to be crowded at all… you can find a great spot along the window to watch the show with the family. Most people have already found their spots in the sand at North Avenue Beach, so this location is a little secret I’m letting you in on :). Oh! The planes flew RIGHT by the glass windows at the Willis Tower when I was standing in the Skydeck, definitely something you won’t experience on the ground.

Another location I scoped out for you– came with a cool breeze, no crowds, and a calm/quiet

surrounding…. this was the DuSable Harbor. It’s located in the heart of downtown Chicago at the foot of Randolph Street. If you still want to catch some rays during the show, then this location is it. I don’t own my own boat… but I called a friend and jumped on-board. Helicopters flew RIGHT over us– we felt like we were practically IN the show. Now, I will admit, this wasn’t the best location to catch all the action, but it was a nice, relaxing way to see some of it up close and personal… while still enjoying a great day out on the boat.

The air show is a free event that showcases daredevil pilots, parachute teams, and jets flying in

formation, as well as a water-skiing and boat-jumping component. Because of its proximity to city beaches and skyline, the demonstrations are visible from almost everywhere along the Chicago lakefront.

So, if you want to catch a show that’s been going on since 1959…. don’t feel like there are no options when it comes to where you watch it. After-all, this is Chicago’s second most popular festival… and you don’t want to miss it!!