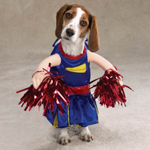 You, like so many others these days, find yourself looking for work. You shine your shoes, clean and press your suit or dress and make sure your hair and teeth are properly brushed. You do your best to look like the professional you are or wish to be, as the case may be. Soon, you discover that some jobs, like rodeo clown, are far more dangerous than they appeared in 70’s TV shows. They also don’t pay well. Others, like CEO of a major corporation, pay really well but require skills and education that you may be lacking. Still others make you think that being homeless might be a smart career choice. For example, yesterday I was offered the chance to be a counter clerk at a grocery store in a high crime neighborhood, 3rd shift – naturally, for the incredible amount of $6.00 per hour (before taxes). I know you’re shocked that I said thanks, but no. That’s even less than I make here and no one shoots at me when I blog.

Nevertheless, some people know exactly what to wear to get the most out of their sartorial choices. For example, police in Idaho remind casual readers that wearing bunny suits in public while stalking children is not a good idea.

Police in Idaho Falls have told a man to stop wearing a bunny suit in public after people complained he has been frightening children.

Residents in the northwestern city of 54,000 people also reported William Falkingham, 34, occasionally wears a tutu with the bunny suit, police said in a statement on Tuesday.

Police warned Falkingham after a woman said she saw him dressed in the costume, peeking at her young son from behind a tree and pointing his finger like a gun.

While a police report said other residents were “greatly disturbed” by his activities, one neighbor defended Falkingham as eccentric but otherwise harmless.

“He’s got the bunny outfit, a cowboy suit and a ballerina dress but you don’t see him except where he’s tripping through his backyard,” Deborah Colson told Reuters. “He’s got a strange lifestyle at home but we all do weird things at home.”

Falkingham told officers he “enjoys wearing the suit” but understands the concerns and that he could be cited as a public nuisance, police spokeswoman Joelyn Hansen said.

Of course he enjoys wearing the bunny suit. He’s out of his freaking mind.

As to Deborah Collins, I HAVE GOT to party with her.

Anyway, sometimes you’re just not in a bunny suit frame of mind. For example, if you’re robbing a 7-11 then you might want to eschew the Leporidae theme and go with the Spongebob Squarepants motif.

Authorities in Florida said they were trying to identify an armed man who robbed a 7-11 store while dressed as the cartoon character SpongeBob Squarepants.

Lizasuain said shots were fired during the incident, but no injuries were reported.

The spokesman said the crime was unusual for the department.

“It’s not unusual for criminals to disguise their identity,” Lizasuain said. “It is unusual he would use that particular character.”

Well, of course it was in Florida. What the heck did you expect?

On the other hand you do have to give the dude (dudine?) style points.

But what if you don’t have a cool costume when you wish to be nefarious? Not a problem. As police in Brookfield, Wisconsin report, you just can sit nude in someone’s yard.

Police said Derek Knight, 20, of Brookfield, was arrested at 1:30 a.m. Friday after driving to a condominium complex in a car that had been reported stolen, Patch.com reported Wednesday.

Officers said Knight was previously arrested June 29 after a woman reported he was sunbathing nude in a chair near her front door and refused to leave. Police arrived to find Knight wearing only a bandanna wrapped around his face and a pair of sunglasses.

Knight told police he had walked nude from his home to the woman’s residence.

Police said Knight had been released on bond earlier June 29 from an arrest stemming from allegations he stole a car from the Town Hall parking lot June 27 and smoked hashish inside the vehicle.

Knight is facing charges of lewd and lascivious behavior, disorderly conduct, operating a vehicle without owner’s consent, possession of drug paraphernalia and two counts of bail jumping. His bail was set at $1,500.

Maybe not you since you’re a god or goddess, but I know I have.